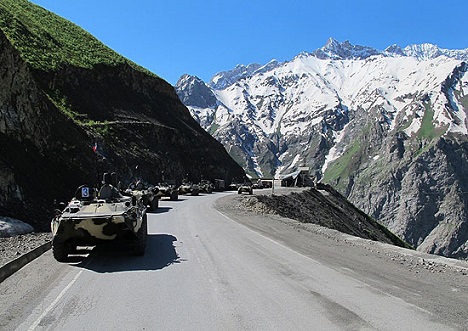 Russia has committed to equip Tajikistan’s army with modern weapons and to modernise it in general. Source: Ministry of Defence of the Russian Federation / mil.ru

Moscow is expected to spend up to $200 million in the modernisation programme in return for rights to maintain a military base in the Central Asian country.

Russia will spend up to $200 million to modernise Tajikistan’s army by 2025 in exchange for maintaining a military base in the strategically important country.

Tajikistan’s President Emomali Rakhmon has promised that, in the autumn, his parliament will ratify an agreement to extend the term of a Russian military base there. Dushanbe had been dragging its feet over the ratification in the hope of getting help with re-equipping its army ahead of the NATO coalition forces’ pullout from neighbouring Afghanistan, according to an expert.

Vladimir Putin has asked defence minister Sergei Shoigu to assess the risks stemming from the coalition forces’ pullout from Afghanistan (scheduled for late 2014) when developing the programme for re-equipping Tajikistan’s army. The programme is to be expanded accordingly in the very near future, Shoigu said.

Rakhmon has promised that Tajikistan’s parliament will ratify agreements on the status and terms of stay of a Russian military base signed in 2012. “Our attitude towards this matter is very serious and we are decidedly committed to fulfilling our obligations,” Tajikistan’s President said. His Russian counterpart added that implementation of the base agreement would be launched soon. “Russia has completed all the requisite procedures in this regard,” Putin said, following the negotiations on August 1.

Last October, the presidents reached an agreement to extend the stay of the 201st military base (Russia’s biggest outside its own territory) during Putin’s visit to Dushanbe. The agreement provided for a 49-year extension (up to 2042), automatically renewable for five-year terms. Under a previous agreement, the base’s term was to run out in 2014.

As before, the new agreement is rent-free.

Instead, Russia has committed to equip Tajikistan’s army with modern weapons and to modernise it in general. It was not reported at the time how much this would cost Russian taxpayers. Putin signed a law on ratification of the agreement in May 2013.

Tajikistan, however, has procrastinated with ratification. Moscow met both conditions set by Dushanbe back in February, as it gave preferential status to Tajik immigrants and lifted export duties on petroleum products exported to Tajikistan.

Putin orders support of Tajik military after US pullout from Afghanistan

“Tajikistan wanted to receive additional funds to modernise its army in exchange for ratifying the agreement,” Vladimir Zharikhin, Deputy Director of the CIS Institute, told Gazeta.Ru. “This is a substantial amount for Tajikistan, especially in view of the potential problems arising soon when NATO pulls out from Afghanistan,” he explained. Additionally, a verbal agreement was reached last October on investments in Tajikistan’s hydropower generation. On Thursday, Tajikistan reiterated its interest in four new medium-capacity hydro power plants to be built in the country by Russian companies.

In addition to military cooperation, both presidents again discussed immigration matters. “Remittances from Tajik citizens living and working in Russia play an important role in supporting and developing Tajikistan’s economy. That’s why we discussed cooperation on immigration and agreed to resolve any issues arising in this area quickly, by our combined efforts,” Putin said after the meeting with Rakhmon. Last October, both countries agreed to extend the terms of registration and work permits for immigrant workers.