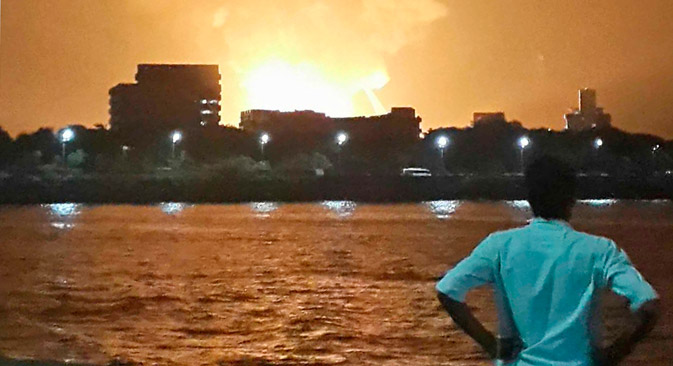 The 16-year-old submarine sunk minutes after the explosion. Source: Reuters

All 18 personnel on board the submarine are feared dead. The loss of the Sindhurakshak will adversely affect the Indian Navy, bringing down its present fleet of submarines to 13.

A major fire broke out following an explosion on board INS Sindhurakshak ten minutes after midnight on August 14 in Mumbai naval dockyard. Preliminary reports suggested that all 18 naval personnel – 15 sailors and three officers aboard the ill-fated submarine – are feared dead. Indian Defence Minister AK Antony is expected to make a detailed statement about the mishap in the parliament later in the day today.

INS Sindhurakshak, the seventh and the last of ten Kilo class submarines that India bought from Russia between 1986 and 2000, was redone and refitted in Russia for $18 million recently. Of the three remaining submarines, one was repaired in India and the others are still under repair.

A terse announcement by the Indian Ministry of Defence, made at 10.43 am today, said that “due to as yet unknown damage suffered as a result of the explosion, the submarine has submerged at her berth with only a portion visible above the surface.”  It added that “a Board of Inquiry is being instituted to investigate into the causes of the accident.”

Though the cause of the fire was yet to be made public, Times Now TV channel reported that the mishap occurred because the warheads on board the vessel exploded. It said debris of missiles and boosters aboard INS Sindhurakshak had been found in the Mumbai naval dockyard.

AK Antony briefed Prime Minister Manmohan Singh on the INS Sindhurakshak fire in the morning and left for Mumbai. He confirmed that some Navy personnel have died in the incident. "I have apprised the PM of the incident. I'm going to the spot. The Naval Chief (Admiral DK Joshi) is already there. I'm saddened by the incident as many Navy personnel lost their lives," Antony said.

The Indian Defence Ministry and Russia’s Zvezdochka shipyard had signed a $ 80 million contract on June 4, 2010 for upgrade and complete overhauling programme of the submarines bought from Russia. The upgrade programme also included redoing the hull structures of the submarines.

Zvezdochka came up with a brief comment on the incident and its spokesman said a group of its eight employees was in Mumbai, but the company was not in contact with them. He clarified that none of its eight employees presently in Mumbai was aboard the INS Sindhurakshak at the time of the accident. “A group of eight Zvezdochka workers are in India now we cannot reach them right now. There is no information yet about what happened,” a Zvezdochka spokesman said.

Russia is ready to send specialists to investigate the explosion, Alexei Kravchenko, an official with the United Shipbuilding Corporation (OSK), said on the Rossiya 24 television channel.

“We are in constant contact with the Indian authorities. If need be, additional specialists will be sent to Mumbai to take part in the investigation and the work of the appropriate technical commission to investigate this accident,” he told the news channel, according to the Voice of Russia.

All 18 on board Sindurakshak believed to be dead

The INS Sindhurakshak underwent a mid-life refit programme in Russia. It arrived at Zvezdochka shipyard in Severodvinsk in August 2010 for an overhaul and upgrade and the process was completed in June 2012. The upgrades and modernisation carried out by the Russian engineers included improved electronic warfare systems, control systems and integrated weapon control system.

As a result of this large-scale modernisation, the submarine was enabled to incorporate several new equipment and weapon systems like a new Russian missile system Club-S with 200-km cruise missile range and Indian sonar and radio communication systems. The submarine started its sea trials in October 2012 and was good enough to serve the nation for many more years.

This is not the first time when INS Sindhurakshak has met with a mishap, though this time is far more serious. On 26 February, 2010, a sailor aboard INS Sindhurakshak was killed in a fire that broke out in the battery compartment of the submarine while it was docked at Visakhapatnam naval base. There was no serious damage to the vessel in that accident.

The loss of INS Sindhurakshak will adversely affect the Indian Navy as it will bring down the present fleet of Indian submarines to 13.No new submarine has been added to the Indian Navy’s fleet in last 16 years. Indian Navy needs at least 20 submarines and has prepared a blueprint of boosting its submarine fleet to at least 30 in a decade or so.