Sun, wind or shale will not dim the demand for ‘peaceful’ atom 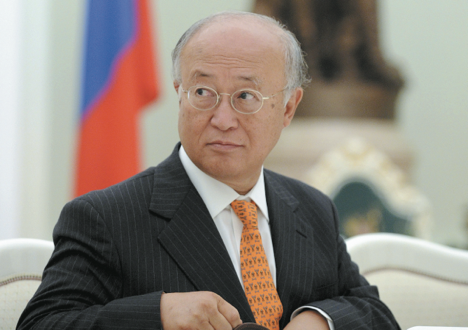 IAEA Forum in St Petersburg focuses on safety concerns and suggests a new strategy to position atomic energy in the backdrop of renewed focus on renewables and ‘shale gas revolution’.

Neither the sun, nor the wind, nor shale gas will dislodge nuclear power from the global energy balance. Contrary to scepticism among some sections, Yukiya Amano, the director general of the International Atomic Energy Agency (IAEA), has predicted that the share of atomic energy will continue to grow, and could even double by 2030. This was also the broad conclusion at the “Nuclear Energy in the 21st Century” International Conference, held recently in St Petersburg, which attracted ministerial-level delegations from 89 countries worldwide.

Among those who participated were Indian experts headed by Ratan Kumar Sinha, chairman of the Atomic Energy Commission of India and secretary of the Department of Atomic Energy.The conference reviewed the post-Fukushima trends like the political decision of the German authorities to phase out the country’s nuclear plants, and the wariness displayed by Italy. But by and large the trend has been largely positive. According to the official figures declared by Amano, the total capacity of the nuclear power plants currently in operation worldwide amounts to 372 gigawatts (GW). That figure is set to rise by 80-90 GW in the foreseeable future.

France, the US, Canada, Russia and Sweden are all optimising and expanding their national nuclear programmes. China and South Korea have confirmed plans to boost growth in nuclear power generation.

In fact, the demand for nuclear power is surging across the globe, from the Middle East and Africa to Central and South America. Therefore, professionals need to understand and agree the terms and conditions on which nuclear power will be developed, whose projects will be implemented and where, and what financial models and production alliances are required for construction to go ahead. They also need to think afresh on how to position nuclear power against the changing backdrop of developments in other energy sectors, including renewables and the so-called “shale revolution”.

Addressing safety concerns should top the list. The IAEA director general visited the Kalinin nuclear power plant in Russia and checked the operation of new equipment installed in line with post-Fukushima requirements. Having personally started the emergency diesel generators, Yukiya Amano noted that they “fired up” just as good as his car. Rosatom CEO Sergei Kiriyenko reminded his audience that the esteem enjoyed by Russian nuclear technology was borne by the fact that the corporation’s portfolio already includes orders for the construction of 19 new units which are estimated to cost revenues $80 billion by 2030.

Deputy Prime Minister Dmitri Rogozin underlined that Russia saw uses of the “peaceful atom” not only in nuclear power plants, but also in space, medicine, new information technologies, and supercomputers for complex calculations, project works, and computational tasks. The nuclear icebreaker fleet, which is presently experiencing a revival, is a new example of Russian prowess in this sector. He noted that last year saw a record generation of nuclear electricity: 177.3 billion kilowatt-hours, or 16% of total generation. Russia currently has 33 power units in operation, with nine more under construction at five sites.“The future of the nuclear industry lies with innovative technologies,” concluded Rogozin. “And the absolute priority is safety.”

“We are duty-bound to do everything in our power to identify the root causes of the tragic accident at the Fukushima nuclear power plant. But in the wake of Chernobyl, the nuclear industry entered a period of stagnation, that has evidently not happened post-Fukushima. Most countries are continuing to develop nuclear energy, and new members are actively seeking to join the club.”

It is basic installations such as these, say experts, that have brought about the transition to fourth-generation reactors. The same idea was propounded at the IAEA Forum by R.K. Sinha, the head of the Indian delegation.

“There is no doubt that the total number of nuclear reactors in the world will increase,” he predicted confidently. “What’s more, the range of nuclear technologies from which to extract energy is expanding. The chief requirements for the operation of nuclear reactors are reliability and safety. We consider the thorium fuel cycle to be a cutting-edge technology. Thorium can be used to extend the application of nuclear energy in the near future. And in the long term, it will ensure large-scale advancement.”

In the backdrop of safety concerns over Kudankulam nuclear plant in India, Sinha stressed on a respectful dialogue between supporters and opponents of the “peaceful atom”.