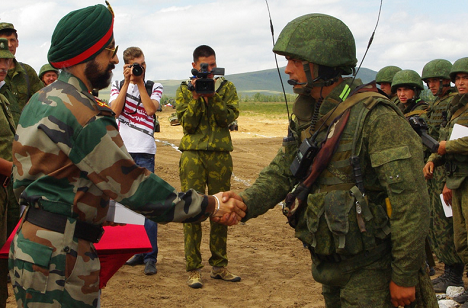 Both the countries cannot simply make the defence partnership hostage to one mishap as that of INS Sindhurakshak. Photo: Indra-2012 drills. Source: Ministry of Defence of the Russian Federation / mil.ru

The leaders of both the countries have taken a wise course in looking into the submarine accident in a cool headed, calibrated manner.

Speculations about a frosty defence relationship between India and Russia aftermath of the Russian made submarine blasted and sunk off the coast Mumbai have not yet held ground. Though the damage to the submarine and loss of lives will be matters of concern for both the countries, it may be farfetched to argue that the incident on the eve of India’s Independence Day would mar bilateral defence relations and affect projects undertaken by both the countries.

As an evidence of this, it can be pointed out that political leaders and top officials from neither country have pronounced anything which would prove as indication of deteriorating defence relations. The Indian Navy has set up a committee to investigate into the mishap. Neither of the governments has indulged in a blame game. There are perhaps differences of opinions and perceptions about the mishap and as some of the news reports extensively highlighted one aspect at the cost of the other, the leaders of both the countries have taken a wise course in looking into the incident in a cool headed, calibrated manner.

The investigation by the Indian team would throw more light on the incident and help fix responsibilities with the help of Russian experts who helped modernising submarine as per the Indian requirement. There are also sections of media which do not rule out the possibility of sabotage in the mishap. Out of 14 submarines Indian navy had possessed, 10 are of Soviet/Russian made including this ill-fated kilo-class diesel-electric submarine that was inducted into Indian navy early this year.

As a further mark of smooth defence relations, the Indian Defence Secretary R. K. Mathur will continue his visit to Russia this week with a high-powered tri-services team to discuss bilateral defence issues including the Admiral Gorshkov aircraft carrier, rechristened INS Vikramaditya and fifth generation fighter aircrafts. Though the carrier agreement and retrofitting have passed through many testy waters, the good thing is that neither India nor Russia gave up on this deal despite hitches. This itself shows persistence and seriousness on part of both the countries to continue and revitalise defence cooperation. It is common knowledge that India’s defence preparedness would come to a halt minus Russian cooperation as more than half of India’s arms and armaments are Soviet/Russian origin and for their smooth functioning it is but imperative that defence cooperation continues.

Russian expertise particularly in terms of procuring spare parts, repair and retrofitting is necessary for Indian defence. Russia has also provided India state of the art technologies and both the countries are involved in joint design and development and weapons (a particular privilege that both the countries enjoy, which is rare in case of other countries).

Particularly in the context of Vikramaditya, the 45000-tonne carrier has successfully undergone sea trials in Barents Sea this July, and will further undergo aviation trials including the landing and take-off of fighter aircraft from its runway in White Sea in coming months, before joining Indian navy in the end of this year. The acquisition of this carrier at the cost of about $2.3 billion will not only strengthen India’s defence preparedness but also put it in an advantageous position in relation to its neighbours. The 284 metre-long and 60-metre-high carrier will be fitted with modern communication systems, a telephone exchange, pumps, hygiene and galley equipment, lifts and many more facilities.

Besides the Vikramaditya, India and Russia will deliberate on a range of defence related issues during the visit of Indian defence secretary. As per a report “the two sides are also expected to discuss the futuristic joint development projects for the armed forces.” There are possibilities that both sides will discuss the upgrade of one more Kilo Class submarine INS Sindhushastra, one among 10 submarines India procured from Russia. In early 1980s India had procured these submarines from Russia and the deliveries were made from 1986 to 2000. It has not yet been announced officially whether the recent mishap will be part of deliberation during the visit of the secretary.

Both the countries cannot simply make the defence partnership hostage to one mishap as that of INS Sindhurakshak. The relations are much deeper. Taking a leaf from the document of the Strategic Partnership document signed in 2000 that sought “to impart a qualitatively new character and long term perspective to their (India and Russia) multifaceted bilateral relations and to actively develop them in political, economic, trade, scientific, technological, cultural and other fields, in the years ahead and into the 21st century,” the countries would do well to smooth sail the recent incident and further strengthen the defence partnership while learning lessons from the recent mishap. The visit of Defence Secretary in the next week is a step in that direction.