Russian long-term economic growth may be leaner than predicted 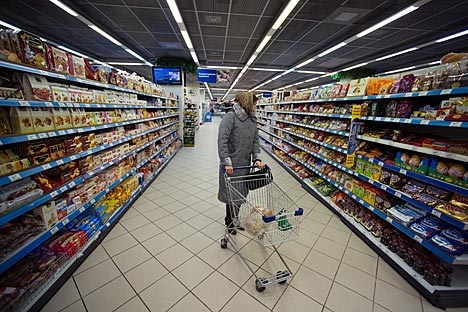 Experts don't view predictions and numbers as a signal of something having dramatically worsened in the Russian economy. Source: RIA Novosti

The Russian economic development ministry has lowered the country's forecasted growth rate through 2030. Analysts are of the opinion that the new projection is conservative and describes the most negative scenario.

Decreasing real oil prices and oil production output will cause Russia’s economic growth during the next decade to slow significantly lower than previously predicted, according to new estimates released by the Ministry of Economic Development.

The MED said in March that Russia’s economic growth would be 4.3 percent by 2030, but the new estimates put that rate closer to 3 percent. As a result, the ministry predicts that Russian’s economy will begin to lag behind the global economic growth rate in the next 17 years.

According to the revised forecast, the country's oil-and-gas sector will be growing faster than the rest of the Russian economy. However, owing to the absence of any significant growth in real oil prices and stagnating oil production output, Russia's fuel exports will no longer be the powerhouse of the economy that they used to be prior to the 2009 crisis.

Economic experts caution that the new forecast is not all bad news, however. Several experts polled by RBTH do not view this as a signal of something having dramatically worsened in the Russian economy.

“That our economy had entered nearly total stagnation first became evident back in March,” said Nikolay Kondrashov of the Development Center at the National Research University Higher School of Economics. "This is why the latest revision of the MED forecast appears to reflect an adjustment of the ministry's expectations to the real situation: the March forecast, which projected economic growth at 4.3 percent, was totally unrealistic and had extremely negative feedback from independent experts."

Alexey Balayev, an expert with the Economic Expert Group, agreed that the conservative scenario better correlates with the forecasts of international organizations.

“In addition, practise demonstrates that even with a favourable economic scenario, long-term budget planning must be based on a conservative prediction so as to minimize possible risks," he said.

The Higher School of Economics’ expert Nikolay Petrov said he believed the new MED forecast is a message from the ministry's new head, Alexey Ulyukayev, who does not want to pick up the tab for the decisions made by his predecessor.

“This is not to say that the revised forecast will necessarily come true. It is more of a wake-up call, a signal that radical, serious and painful reforms are urgently needed – in fact, some of such measures are already under development. Perhaps we may expect changes in the government, including former Finance Minister Alexey Kudrin's comeback," Petrov said.

Maxim Petronevich of Gazprombank's Center for Economic Forecasting said he also believes the new forecast is a precursor to government reshuffles.

“The next step would be to fine-tune the state administration system so that the forecast would prompt action, not merely serve as an excuse for inadequate implementation of [government] decisions,” he said.

Petronevish said the MED has managed to improve Russia's standing on the World Bank's Ease of Doing Business ranking, which the ministry uses as its own key performance indicator. This demonstrates that fine-tuning the state administration is not impossible, despite all the nuances of Russian politics.

“Russia ascended to 20th position on the Doing Business index thanks to [the MED's] purposeful efforts to simplify the procedures for getting electricity and dealing with construction permits,” he added.

However, analysts note, the new figures will hardly affect those investors who are in it for quick returns. Prilepsky said short-term investments will remain at the current level.

As for long-term investments, low inflation will play an important part. The current forecast lowers the expected accumulated change in the level of consumer prices in 2013 to 2030 by more than 25 percent. This means investors should not be afraid of the revised figures, Prilepsky said. Indeed, the forecast net capital inflow figure has been lowered very insignificantly (by 0.3 percentage points of the GDP on average, per year).

"The central offices of major international companies will certainly take the forecast into account when planning their investments for 2015-16, although any concrete decisions will continue to be taken with the parameters of concrete investment projects in mind," Petronevich said.

As for the sectorial structure of the capital inflow, the baseline forecast still assumes that the oil-and-gas sector will retain its leading role compared to a fairly slack growth in the competitiveness of the other economic sectors. Correspondingly, we may expect that fuel and energy assets will remain particularly attractive to foreign investors, Prilepsky said.

Since Russia's economy is predicted to be growing slower than the average global figures, the share of Russian companies in the overall volume of transactions on the global asset market will decline correspondingly.