Driverless car to be a reality within 10 years 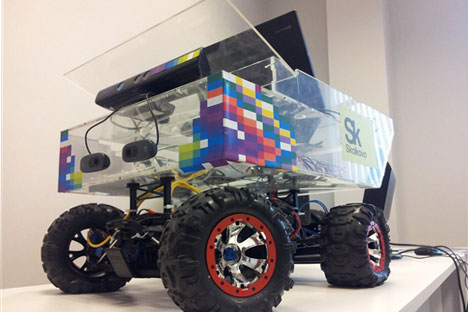 RoboCV plans to take the robot control market by storm. Just a year and a half old, the company has already quickly gone from concept development to the international market.

Sergey Maltsev and Dmitriy Smirnov set up in a small room in the Skolkovo technology park to develop RoboCV in April 2012. After a year of painstaking work, their transport automation program began to appear on Russian and international markets.

They have successfully produced trackable, quick-thinking robots able to avoid obstacles with ease and to ‘see’ and ‘understand’ the environment around them. The Russian team though are not planning to stop there: they have plans to create similar devices for cars, open cast mines, the Russian Army and the Ministry of Emergency Situations.

RIR: What is your product group for the products you create?

Dmitriy: We have a basic technological pool, which potentially can be used in different sectors. These are a set of different technical vision algorithms, through which any given means of transport is able to ‘see’ the space around them, to understand where and to be more precise about how they need to proceed.

The market segment in which we have already started to introduce our products commercially is in warehouse technology. Another area in which development work is ongoing is in driverless vehicles for industrial territories and campus zones. A third is the driver sssistant system, which helps a driver to operate a standard car.

Sergey: Series production of the automatic control system for warehouse technology will begin in 2015 or 2016. Despite the fact that in essence our product is electronic intelligence, which is what the program is, in the future we are planning to provide drivers with a kit: the program plus ready to use equipment.

Dmitriy: For example a client buys the most basic forklift, and we approach them and install our automatic control system and connect it up to the forklift, and it becomes a robot.

Sergey: Our aim though is to go into assembly line production. That is to say the forklift manufacturer would install all our components and our program in their own factory, so that they can produce a ready to use warehouse robot on the production line, which they can supply to the client directly.

RIR: How broad is the order portfolio? Which products are particularly in demand?

Dmitriy: If we are talking about warehouse technology, we recently completed a project for a large international company just outside Moscow. We are now in talks with other customers - around 15 companies, overwhelmingly these are international logistics operators.

By the end of the year we are planning to start an additional one or two applications. The plan for the next year is to produce more than 10 large applications with more than 100 automated technology modules. The average contract value would be measured in the tens of millions of roubles.

They understand how important the technology of automation is. They have tried to experiment themselves but so far, they have not been able to develop the ideal product that they are able to fit onto a production forklift. We have a good chance of being the company to achieve this.

RIR: So you have become pioneers?

Dmitriy: We are definitely among the leaders in the warehouse technology ‘intelligent’ automatic control systems installation market.

Our product is not ideal, it needs to be refined and developed but it works and it is on the market - and we know how to make it perfect.

The other thing is that we have not yet reached a point where ordinary cars can be fitted with automatic control systems. In the long term, however, we want our technology to be used anywhere where a driver is required today. This is a long-term aim, by 2020.

RIR: Have you not considered applying for international patents?

Sergey: We have considered it, but so far we have been more engaged in development than in patenting. We already have one Russian patent, and now we are in the process of applying for a Skolkovo grant, which incorporates international patenting.

Dmitriy: Generally speaking, the Skolkovo grant would be very useful and would help us to face down our competitors making automatic control systems for ordinary cars more quickly. However if we do not get this grant for some reason it would not be a disaster for us.

At present LETA Capital has invested $500,000 in us and another round of investment to attract more serious money is planned for next year. Apart from that, we are already feeling the benefit of the earnings from our current clients in the warehousing market.

RIR: What is the situation with respect to certification to international safety standards, which are required to enter overseas markets? After all it takes years to obtain them

Dmitriy: Absolutely! The most important thing in certifying the systems we produce is safety. We use a separate subsystem independent of the complex artificial intelligence algorithms, which is responsible for operational safety.

This in turn consists of components certified to the strictest European standards. Therefore these components guarantee that a warehouse vehicle fitted with our programme will not run into somebody or hit a wall. Everything we do is done according to industrial safety standards.

RIR: In the long term you are planning to capture 10 percent of the intelligent systems market in the warehouse equipment segment. When do you expect to achieve this?

Dmitriy: This is highly likely to be by 2015 or 2016. At present the warehouse systems automation market is not that big, but in the next two to three years it will grow in leaps and bounds.

RIR: How successfully is your development work in the car sector progressing?

Sergey: Similar developments are progressing in pace with the rest of the world, but we are still lagging behind in one respect – but we want to make this up very quickly. In contrast to other developers, which are looking at cars in an abstract way, we have the experience of applying the technology in a real environment.

Thanks to our warehouse applications we are amassing a great deal of experience in how these automatic control systems work. In the future we are planning to draw as close as possible to the projects being produced by car manufacturers and independent developers such as Google (the Google driverless car).

We estimate that an automatic control system will be available on the market in 2020. It may not be a fully fledged system, and you wont be able to sit in the back seat and just travel freely - but this will become a reality in five to 10 years.