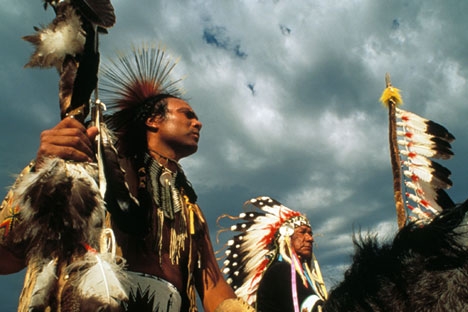 The study concluded that genes typical of the people of West Eurasia came to the American continent earlier than previously believed - namely 24,000 years ago, during the Upper Paleolithic period. Source: Alamy / Legion Media

Scientific research reveals that genes associated with the inhabitants of Siberia first appeared on the American continent 24,000 years ago.

A team of scientists, including seven researchers from Russia, recently revealed the results of a study on the DNA of the ancient inhabitants of Siberia during the Upper Paleolithic period. Scientists were able to obtain new data on the early stages of human settlement in various continents, including America.

The research confirmed that the first inhabitants of the American continent, the Paleo-Indians, arrived there through the Beringia, an isthmus between Siberia and Alaska that existed at that time. Altai is considered to be the genetic birthplace of the first Americans. Their ancestors settled in Siberia and eventually reached America.

Siberia: A land of spaces and mystery

While the first Americans were thought to have the closest genetic relationship with East Asia, until now scientists were not able to determine exactly to which people of the Old World their genes could be most closely be associated with. Through the study, scientists were able to make new conclusions about the makeup of the ancient American Indians.

The team, led by Maanasa Raghavan of the University of Copenhagen, studied the genome of the ancient inhabitants of Siberia and compared these data with the genes of other peoples. The results were published in the Nature journal.

The researchers took a DNA sample from the 24,000-year-old skeleton of an ancient inhabitant of Siberia, discovered during excavations in 1928–1958 in the Usolsky district, Irkutsk region, near the Malta station. It is now part of the Hermitage Museum collection.

Scientists conducted DNA sequencing on the remains of this ancient resident of Siberia, and compared the data with the genomes of individuals belonging to 11 modern ethnic groups, four Eurasian groups (ancestors of modern Mari, Tajiks, Avars and Indians), as well as with the genome associated with Denisovans, a subspecies of Homo Sapiens recently discovered in the Altai Mountains. The results showed how Karitiana Indians, an indigenous people of Brazil, are genetically close to ancient Siberians.

From these results, the study concluded that genes typical of the people of West Eurasia came to the American continent earlier than previously believed - namely 24,000 years ago, during the Upper Paleolithic period. Furthermore, the data revealed why Indians carry the haplogroup X, a mitochondrial DNA haplogroup commonly occurring among the peoples of western Eurasia, but not found among East Asians.

“The results refer to the early stages of peopling of the continents, particularly Siberia and America. In addition, they are indirectly connected to the issues of race genesis, although the matter is discussed cautiously by the scientists.The issue, however, is of biological nature and deeply connected to the topic of adaptation of human populations and to their different living conditions in different climatic zones of the globe,” says Lyudmila Osipova, co-author of the study and head of the Population Ethno-Genetics Laboratory at the Institute of Cytology and Genetics SB RAS.

Despite the relatively good degree of research conducted by geneticists on the early peopling of our planet and the identification of early human migration patterns, life is more complicated than any scheme, Osipova argues. “The question is: At what level of organization were race genesis processes taking place – Homo sapiens or even at earlier stages? There are a lot of discoveries still to be made,” she concludes.

According to Osipova, the study confirms the earlier hypothesis about the origins of Native Americans, and provides a great deal of fundamental knowledge on lesser known aspects of migrations, including the movements of the people belonging to the European type towards the territory of Siberia in ancient times.