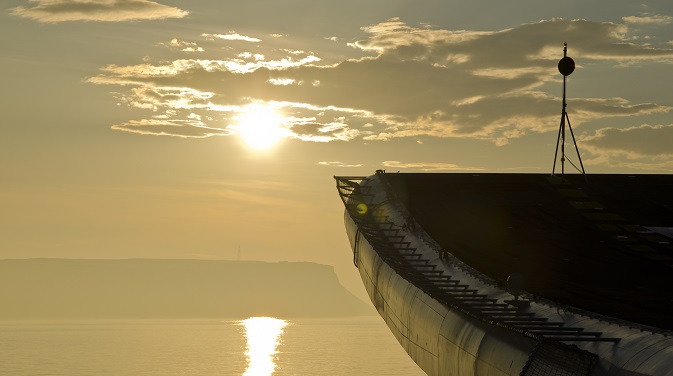 India’s flagship carrier reached the Karwar naval base this week after a month-long journey. 75 Russian specialists will remain in India to help the crew prepare the aircraft carrier to enter the service of the Indian Navy.

Exactly a month ago, the INS Vikramaditya aircraft carrier left Russia's territorial waters after officially being handed over to the Indian Navy.

For 26 consecutive days (with a short stopover in Lisbon) the vessel traversed 10,212 nautical miles. That was the distance from the quay of Sevmash, Russia's largest ship-building complex where the former cruiser Admiral Gorshkov was reborn, to the naval base at Karwar, where the Indian Navy's newest and most powerful warship will be stationed.

According to Rossiyskaya Gazeta, the final stage of the passage (through the Mediterranean Sea, the Suez Canal, the Red Sea, the Gulf of Aden, and the Arabian Sea) was relatively uneventful. The same cannot be said about the North Atlantic crossing, during which both vessel and crew experienced a raging storm. An Indian corvette accompanying the aircraft carrier even suffered a crack in the hull, which had to be urgently sealed up in Lisbon. This planned stopover gave a welcome respite to those on board.

Together with the crew, the Vikramaditya was (and still is) home to a team of Russian experts, led by Sevmash senior engineer Igor Leonov, who was responsible for the handover. In total, 174 specialists were assigned to the transfer. In addition to the general obligation to guarantee the material working condition of the vessel, they were tasked with testing the operation of the air conditioning and refrigeration units in the environment of the southern seas, where the temperature of the air and water differs markedly from Murmansk and Severodvinsk.

These tests, in the Red Sea and the Gulf of Aden, demonstrated the design performance of the equipment. At an air and water temperature of around 28°C, the desired 20-25°C was maintained in the cabins. In the engine boiler room, where cooling is provided by seawater (as per the design), the mercury rose to 40°C — but that is a price that most surface ships have to pay.

On the approach to Indian shores, in addition to testing the ship's most critical systems in “domestic conditions,” Commodore Berry's crew took part in tactical exercises with other Indian Navy vessels. The senior officers who boarded the Vikramaditya noted with unconcealed admiration the vessel's efficient operation, radar capabilities and seaworthiness.

Notes from the Vikramaditya

On January 7, when the Orthodox world celebrated Christmas, the aircraft carrier arrived at its destination and dropped anchor outside the Karwar naval base. Before that, a special entry was made in the logbook: since the commencement of sea trials, the vessel under the name Vikramaditya has covered a total of 30,000 nautical miles.  The next day, January 8, the carrier docked at its destination.

The Indian sailors were followed ashore by the Russian team of specialists — their first footsteps on dry land since the voyage began. Most of them will return home soon, while 75 will remain in India to help the crew prepare the aircraft carrier to enter the service of the Indian Navy. According to Indian sources, the process will take 3 to 4 months.

It is believed that Commodore Berry's crew will set sail for training combat missions as early as January 15-16. And in February, according to unofficial information, the ship is due to arrive in Mumbai, where a grand welcome is being planned. The ceremony is expected to be attended by Prime Minister Manmohan Singh and guests from Russia.