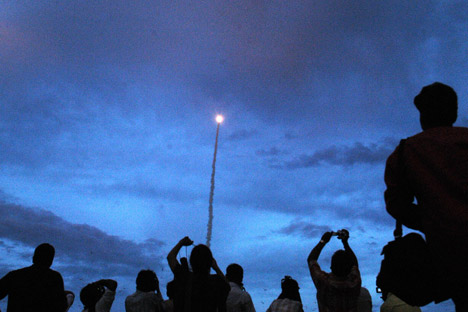 It would not have been possible for India to make such significant forays into space without the tremendous support and cooperation extended by Russian scientists over the decades.

India became a full-fledged member of the elite space league of the world  after successfully putting the 1982-kg GSAT -14 communication  satellite into perfect orbit with the help of  its  Geosynchronous  Satellite Launch Vehicle (GSLV) rocket, equipped with an indigenous  cryogenic engine. It took just 1000 seconds of flight for the GSLV rocket to inject the satellite into orbit, heralding India’s membership in the cryogenic club that  so far included only the US, Russia, Japan, France  and China. This is a brilliant demonstration of the Indian Space Research Organisation’s (ISRO) capability in cryogenic technology- a crucial element in building more powerful launch vehicles.

After a protracted history of two decades of toil, India has been finally successful in firing an indigenous cryogenic engine to launch a GSLV rocket. This success is very crucial for India’s future projects including Chandrayan-2. India has now gained the capability to put satellites weighing more than two tonnes into orbit.

As India glows in pride in its moment of triumph of the successful launch, it recalls the Russian assistance in developing India’s space research programme over the years with profound gratitude. It is a fact that it would not have been possible for India to make  such  significant forays  into space  without  the tremendous support and cooperation extended by Russian scientists from the beginning of the long journey. It was the former Soviet Union that launched the first two Indian satellites - Aryabhat and Bhaskar from the Baikanour cosmodrome – into orbit.

The story of India’s struggle to get the crucial cryogenic engines goes back to 1991 when it was due to receive the technology from the Soviet Union, which unfortunately disappeared from the world map the same year. Under the deal, the USSR was to provide three cryogenic engines and transfer the crucial technology to India. After Soviet disintegration, Boris Yeltsin‘s Russia, buckling under US pressure, refused to honour the agreement that stipulated selling the engines and transferring the technology to India.

Though US demanded a ban on technology transfer by Russia to India under the pretext of violation international agreement, it was indeed a perfect case of depriving Russia of the lucrative Indian market, as Washington and Paris were keen to sell these engines and technology to Delhi, however, for a much higher price. When Moscow understood the US game, it evinced some interest in implementing a cryogenic deal with India. However, a weak Russia then could not muster courage to implement the agreement under tremendous US pressure.

Nambi Narayanan, the man who then headed ISRO’s cryogenic project, managed to bring in crucial components of the engine from Russia escaping US attention.

When Indian carrier Air India refused to carry the hardware fearing US punishment, the ISRO team used Russia’s Ural Airlines to transport it in three consignments. Russian scientists, friendly to India apparently had secretly handed over blue prints relating to making of such engines.

India could have developed its own cryogenic engine by the end of the 1990s with the help of the blueprints received from Russia. However, Nambi Narayanan’s arrest in a highly intriguing espionage case, believed  to be  the handiwork of foreign forces in connivance with some Indian circles, sealed the fate of the project  for some time as the fabricated charges  destroyed the ISRO team ‘s morale. Apparently transfer of cryogenic technology blueprints by Russian scientists to India soon became known to the CIA, which orchestrated the espionage scandal that led to Narayanan’s arrest. According to Narayanan himself, his arrest was part of an agenda of US accomplished by CIA conniving with rogue elements in Indian intelligence agencies.

However, Indian scientists could finally make a remarkable breakthrough  in mastering  the cryogenic  engine technology  that ensured a place for  India in the  elite cryogenic club of the world. This could not have been possible without precious support extended by Russian scientists.

Space remains one of the strongest pillars of the Indo-Russian strategic partnership in recent years. During  Russian President Vladimir Putin’s visit to India in December 2004, two space-related  bilateral agreements – Inter-governmental  Umbrella Agreement  on Cooperation in the outer space  for peaceful purposes and the Inter Space Agency Agreement on Cooperation in the Russian Satellite Navigation System GLONASS - were signed. Subsequently, a number of follow- up agreements on GLONASS were concluded.

Russia is looking at offering India a major role in the development of its GLONASS satellite navigation system. Such a step would augur well for bilateral cooperation in this strategically important area.