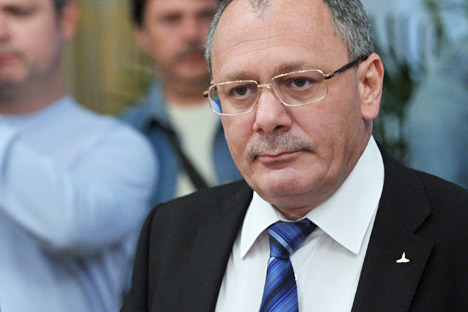 Sevmash CEO Mikhail Budnichenko: "We had no doubt that the equipment would operate flawlessly". Source: Alexey Nikolskiy / RIA Novosti

Sevmash CEO Mikhail Budnichenko spoke to RIR about the refurbishment of the INS Vikramaditya and the assigning of the shipyard’s specialists to the Indian aircraft carrier under the post-warranty services contract.

Why were almost 200 Russian specialists assigned to the crew of the Vikramaditya for the transfer to India? Were you unsure that the vessel would operate smoothly? Or did you have doubts about the readiness of the Indian crew?

Under the (post-warranty services) contract, the Indian side stipulated that Sevmash experts be present on board. The machinery is complex, so in order to be able to assist our Indian colleagues to operate it at any moment, the decision was taken to station Russian experts on the carrier.

We had no doubt that the equipment would operate flawlessly. That was shown by the sea trials, which were carried out over a period of two years.

Does Sevmash regret losing its most qualified specialists for such an extended period?

It is very demanding work, and we are not disinterested in how the ship will be serviced during the guarantee period. Therefore, we sent some of our top people.

What has changed in Sevmash from the time the Vikramaditya contract was signed in 2004 till now? What kind of experience have you gained from the Indian contract?

I want to thank everyone who took part in the implementation of this large-scale international project. The work performed by Sevmash in renovating and upgrading the aircraft carrier is unprecedented in the world of shipbuilding. Besides acquiring industrial experience and skills in dealing with a foreign customer, the company also modernized production. Our shipbuilders mastered new technologies: from fabricating and assembling hull structures to transferring a surface ship to an inlet basin, and much more besides. The process of placing equipment, pipelines, and systems on board the ship proved to be highly challenging. It was a unique experience for Arctic, one of the subcontractors. All this know-how will help us upgrade the cruiser Admiral Nakhimov.

Everything connected with the Vikramaditya turned out to be quite a test for Sevmash. Given this knowledge, how would you approach the signing of a similar contract in future?

At the time, Sevmash really needed the contract. It helped the company survive a difficult period, when the shipbuilding industry was undergoing a deep crisis. Of course, along the way we encountered many pitfalls that we did not anticipate on signing the contract. But the work was interesting and we drew a lot of expertise from it. In summing up, I would say that if commissioned to repair and modernize another aircraft carrier, we would cope with the task much faster: we've established links with other enterprises and the basic principle of the task is now clear. In fact, besides the question of price, there were many production issues to deal with, too. For example, how to combine the testing of the ship's aviation equipment with the special joint flight tests. The trials of the Admiral Kuznetsov, which was built at the Black Sea Shipyard, involved hundreds of enterprises from across the Soviet Union, whereas the testing of the Vikramaditya was effectively entrusted solely to Sevmash. We are grateful to everyone who actively assisted: the Russian Ministry of Industry and Trade, United Shipbuilding Corporation, the Russian Navy, RSK MiG, JSC Kamov, the Chkalov State Flight Testing Centre, the Nevsky Design Bureau, and many others. During the period of renovation and modernization, we worked closely with Rosoboronexport and the Federal Service for Military-Technical Cooperation. During the tests, the vessel affirmed its excellent manoeuvrability and carrier-worthiness. On the way to India, it performed commendably in stormy Atlantic conditions.

On the back of this experience, is Sevmash ready to expand its large shipbuilding operations? And, if such an order came, build a modern aircraft carrier from scratch?

No one can question the competence of Sevmash in this field. As of today, no other Russian company has experience of constructing aircraft carriers. The Black Sea Shipyard, which built such carriers, now lies abroad. Moreover, history shows that Sevmash was created specifically to build surface ships. On December 21, 1939, the first surface ship — the battleship Sovietskaya Belorussia — came off the stocks. In the mid-1950s, the shipyard delivered 46 ships for the Soviet fleet, including two cruisers, 20 destroyers, and more than 30 different civilian vessels. And just a decade and a half later, the enterprise refocused on building submarines. Therefore, if the Russian Navy places an order for surface ships, Sevmash is ready to implement it.