The high price of long vacations 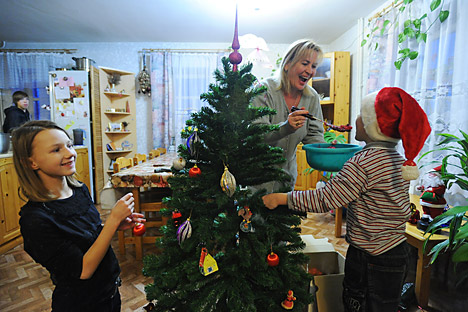 Russians enjoy longer holidays than people in many other countries. Source: ITAR-TASS

There is a broader economic impact of generous vacations, which is similar to what Russia experienced under communism and which could come to haunt it once again in the near future.

Russians enjoy longer holidays than people in any of the other 40 countries tracked by the travel website Hotels.com, combining the generous 28-day paid vacation required by the labor law with 12 days of official public holidays adds up to 40 days per year, compared to 36 days off work for second-place Italy.

Some aspects of such long vacations are undoubtedly positive. A long summer vacation combined with more than a week off at the start of the year and a holiday many people create for themselves in early May gives families more time together and allows them to travel abroad. In theory, this should remedy the pernicious effect of the Soviet-era Iron Curtain and make younger Russians more knowledgeable about the world, more tolerant and open-minded.

But many who stay home actually hate the extended New Year holidays. They complain about the hangovers after drinking, wasteful spending and boredom. But there is also a broader economic impact of generous vacations, which is similar to what Russia experienced under communism and which could come to haunt it once again in the near future.

Whether or not people worked longer hours in the Soviet Union is beside the point. Pay was low, but productivity was even lower. "They pretend to pay us and we pretend to work," went the popular saying. Much time was wasted on party meetings and indoctrination, and the system itself was economically inefficient. The Soviets mined coal and ore to make machinery to mine more coal and ore. The added value of such activity was negligible.

Once communism collapsed and Russia became integrated into the world economy, the economic value of Soviet communism was appraised by the market. The result was a sharp devaluation of the rouble. The Soviet ruble went from parity to the dollar artificially set by the state, or about 10 roubles per dollar on the black market, to the equivalent of about 33,000 roubles to the dollar, which is what the Soviet rouble is worth today. This destroyed all savings accumulated during the Soviet era and made a mockery of pensions.

Russia is now relatively wealthy once more. Its gross domestic product is valued at more than $2 trillion based on purchasing power parity, not much lower than Britain. Unlike the Soviet era, it is market evaluation, not an arbitrary figure set by state planners. But to a large extent, Russia's elevated GDP reflects high commodity prices, notably oil, which in turn have been inflated by the U.S. Federal Reserve's relentless printing of dollars.

Meanwhile, productivity in Russia's non-oil economy is generally low. Where productivity is higher, such as in the automobile and food-processing industry, it is also largely a reflection of petrodollar-driven consumer demand. Moreover, even in those industries unit labor costs are high, since employers have to pay for government-mandated fringe benefits and generous vacations.

If oil prices drop, Russia may suffer a decline in wealth similar to the one that occurred after the fall of communism, albeit on a smaller scale. In particular, falling oil prices would require a devaluation of the ruble, with sharply negative consequences for dollar-denominated national accounts.

This is not a far-fetched scenario but something that happened several times to Venezuela, Algeria, Mexico, Indonesia and other oil producers — even to the Saudis in the early and mid-1990s.