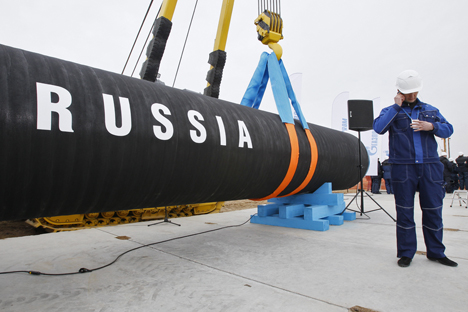 LNG projects in Russia are just being developed, but subsidiaries of Gazprom are already supplying liquefied natural gas to India, albeit in small quantities. Source: AP

The oil and gas partnership between Moscow and New Delhi is set to expand due to an upcoming deal with Iran and U.S. shale oil extraction technology. Russian LNG may also increasingly find its way to the Indian market.

Expanding trade in energy resources and arranging direct supply of raw materials from Russia to India were discussed at last year’s summit meeting between Russian President Vladimir Putin and Indian Prime Minister Manmohan Singh. The parties agreed to explore the possibility of land-based hydrocarbon delivery and agreed to form a joint research group.

However, independent experts are sceptical and think this project may not get off the ground any time soon. “Realistic analysts believe that plans to build oil and gas pipelines from Russia to India belong to the realm of fantasy,” Rusenergy partner Mikhail Krutikhin told RIR. According to him, such projects would be hampered not only by geographical and regional political factors, but also commercial viability considerations.

Currently Russian oil is being delivered to India in limited quantities that do not significantly affect the energy balance. According to the assessment of Vasily Yakimkin of the FIBO Group, total revenue from deliveries of Russian oil and gas to India amount to less than $0.5 billion, while the total market volume is $100 billion.

The main markets of Russian oil exporters are in Europe and in Asian countries such as China, Japan, and Korea. “Russia simply doesn't have any ‘extra’ oil to supply to India at present, since so much is earmarked for China. In addition, due to the fact that reserves are being depleted and their quality is declining, the government forecasts oil production will begin to decline starting in 2016,” added Krutikhin.

Anna Bodrova, a senior analyst at Alpari, agrees with him. By her estimates, the October negotiations really were productive for both Russia and India, but for now, talk of ​​oil remains theoretical.  “There has been some preliminary work done on constructing a surface pipeline to India, and now the project costs are being calculated. There is a serious geographical barrier between the countries that has not yet been overcome with minimal cost on both sides,” she said.

Meanwhile, the cards may soon be shuffled in the oil trade balance. On Friday, January 10, Reuters, citing its sources, reported that Iran and Russia are discussing trading Iranian oil in exchange for Russian goods. This exchange will be possible after the lifting of sanctions against Iran, which had cut Iran's oil exports in half (up to 1 million barrels a day) and will allow them to increase exports by 50 percent. Currently the biggest consumer of Iranian oil is China, which buys about 420,000 barrels per day. It is unlikely that Russia will transport this oil to its own shores – it already has enough oil. It will be resold to other countries. Mikhail Krutikhin is confident that Russian exporters will direct this oil to Asian markets, including India. True, there are still a lot of "ifs," most importantly, if Iran and Moscow can actually agree, and if sanctions against Iran will be lifted.

Last year Russia liberalized the process of exporting liquefied natural gas (LNG), thereby opening up foreign markets to competitors of Gazprom, which had until recently enjoyed a monopoly. LNG projects in Russia are just being developed, but subsidiaries of Gazprom are already supplying liquefied natural gas to India, albeit in small quantities. According to Krutikhin's estimates, with rare exceptions (when India received one or two shipments of LNG from Sakhalin), this is gas from non-Russian producers that Gazprom subsidiaries are speculating in, including medium-term contracts with Indian consumers. This, incidentally, is very similar to how Gazprom penetrated the UK market. The Russian gas monopoly actively traded foreign gas with Britain, which helped it find regular customers there, and now there are enough that building a separate branch of the Nord Stream gas pipeline in the UK is seriously being considered.

Russia is developing three major LNG projects, and at least two of them -- Sakhalin and Vladivostok -- will focus on Asian markets. The third, the Yamal LNG, will also look for customers in that part of the world, although it is more focused on markets west of the Urals because of the difficulty of navigating along the Northern Sea Route in an easterly direction. However, a major obstacle, according Krutikhin, is the high cost of Russian liquefied natural gas compared to gas of the competitors in the Middle East.

Sakhalin-1 is a major investment project in the fuel and energy sector in Russia that Indian partners are participating in. Based on the production sharing agreement, ONGC Videsh Ltd. has a 20 percent share in the project. Since 2006 the company has been getting its share of crude oil, and since 2009, natural gas.

In 2008, an affiliate of the company, Dzharpeno Limited, paid $2.6 billion for the British Imperial Energy Corporation Plc UK, which owned a number of oil and gas assets in Tomsk oblast. In 2011, the company was able to increase production there to 790,000 tonnes, mainly because of new wells that were drilled. In 2013, the company signed an agreement with American Liberty Resources – one of the world leaders in hydraulic fracturing and low-permeability reservoirs – on working together to extract hard-to-recover reserves. The Indian company is exploring the possibility of working on the Bazhenov Formation – a field in Western Siberia that has a huge shale oil reserves that are difficult to recover. Regional authorities have pledged to support the exploration of the Bazhenov Formation. Companies will launch pilot programs, which, if successful, will introduce technology that will develop low-permeability reservoirs and the Bazhenov Formation in a comprehensive and cost-effective way.