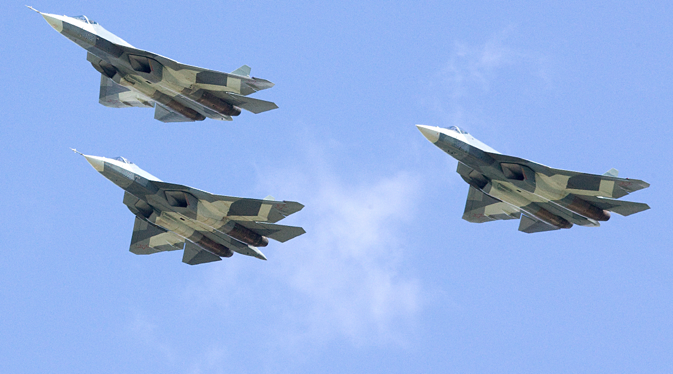 The FGFA project has a potential of becoming the biggest and most expensive Indo-Russian defence project costing India $30 billion. Source: Sukhoi

A major highlight of Indo-Russian relations in 2014 is expected to be the fifth generation fighter aircraft, whose first prototype delivery has already been delayed by about two years and is now expected later this year.

The current focus in Indo-Russian bilateral relations is on consolidation and sticking to conventional diplomacy. This unwritten, unsaid policy is in place in all fields of Indo-Russian ties, particularly in the defence arena. Movers and shakers of India’s Russia policy believe that Indo-Russian relationship is too crucial to be allowed to go adrift, but the need of the hour is to deliver on current projects rather than keep on signing new defence deals.

Moreover, the Indian political system has already hit the pause button with general elections scheduled to be completed before May this year. The new government would take at least four to six weeks to settle down, meaning that nothing spectacular should be expected in Indo-Russian ties in the first half of this year.

A key Indian official responsible for navigating Indo-Russian relations said things are panning out well. An example of this was the BrahMos supervisory council that met in Moscow last week.

The official did not divulge details of what transpired at the meeting and refused to say whether the issue of export of BrahMos missiles to third countries was taken up. The official, however, said that all major points of differences between the two sides on the project were removed at last week’s meeting.

The official disclosed that many new defence deals would come up between India and Russia later this year but declined to give specific details. It is understood that outright purchases by India from Russia would be few and far between. Instead, the flavor of the season is to go for joint production.

A major highlight of Indo-Russian relations in 2014 is expected to be the fifth generation fighter aircraft (FGFA), whose first prototype delivery has already been delayed by about two years and is now expected later this year.

FGFA to be a major test case

India is keeping a very close watch on the progress of the FGFA project which has a potential of becoming the biggest and most expensive Indo-Russian defence project costing India $30 billion. However, New Delhi will loosen its purse strings only if its concerns about value for money, cost-overruns, delays and 40 to 45 improvements in the fighter aircraft’s design demanded are met by the Russians.

The next big thing on the FGFA project is signing the R&D phase of the project which is likely to cost $11 billion.

Much depends on how soon the first prototype is delivered to India and how it performs during trials in the Indian skies. In August 2012 the then chief of Indian Air Force (IAF) Air Chief Marshal NAK Browne had gone on record as commenting thus: “The first prototype of the FGFA is scheduled to arrive in India by 2014 after which it will undergo extensive trials at the Ojhar air base (Maharashtra)...we are hopeful that the aircraft would be ready for induction by 2022.”

India has already conveyed its unease to the Russians over the fact that it is getting only 15 percent of the research and development work share despite paying half the development cost. The Russians have promised to do the needful.

The second and third prototypes are to arrive in India in 2017 and 2019 respectively and the IAF has planned to induct the fighter by 2022, if all goes well.

The Indians are increasingly laying focus on self-reliance and not taking recourse to outright purchase of defence equipment from foreign sources unless it is absolutely critical to national security and such technology is not available in India. This policy is unlikely to be changed by the new government whichever party comes to power.

The writer is a New Delhi-based journalist who tweets @Kishkindha