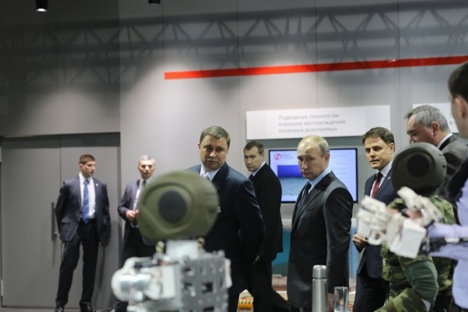 The Fund for Perspective Research is expected to be a technological lift for facilitating innovations in order to achieve qualitative results in the defence and socio-economic domains.

A year ago, Russia set up the Fund for Perspective Research (FPR), an organization designed for boosting research and serial production of unique military technology for the future. This body with substantial state funding would analyse potential  security challenges, threats  to Russia’s national interests, seek bold non-conventional ideas running ahead of time and support scientific research  and designing in defence that would facilitate production of breakthrough defence and dual use technology, Vladimir President Putin said in a meeting of the body held in Tula.

The FPR is expected to be a technological lift for facilitating innovations in order to achieve qualitative results in the defence and socio-economic domains and ensure their quick application and production. President Putin stressed that the Russian army and navy have to be equipped with weapon-systems of tomorrow that would correspond to the requirements of future military conflicts and strengthen the country’s security in a fast changing world. The Russian president called on scientists to think and act head of time, creating the most developed arsenal for the Russian armed forces.

In the course of the past one year, FPR received 1100 proposals  out of which 77 have been approved while work has started on 12 projects  that include “Defender of the Future,” “Air Start”  and “Command 112.” While the first project is designed to replace soldiers with robots in the battlefield, implementation of the second project would facilitate launching of space objects from the AN-225 super heavy aircrafts, otherwise known as Mriya. The third project would help in providing early emergency warnings. The realisation period varies from project to project; while the Air Start project might take 7 years to produce a concrete result, other projects could be realized much faster.

The FPR is not supposed to repeat the components   of the massive and long-term state arms programme. While the State Arms Programme has to deal exclusively with the development of military technology, FPR would be engaged in development of dual-use technologies, capable of bolstering the industrial and economic development of the country.

Encouraging scientists to take financial risks connected with research, whose result could be unpredictable at the outset, President Putin urged Russian researchers to select projects that would by no means repeat designs developed in foreign countries as investment of resources in projects already completed by others is ineffective.

The fund is to work in close cooperation with prominent research centres, educational institutes and industrial complexes of the country and ensure the leading position for Russia when it comes to innovation.  Huge tasks have been put before the FPR- to strengthen research infrastructure and to use new methods of organization and scientific research in the country. The fund has already taken initiatives to create special well-equipped and modern laboratories in leading organizations of the Military Industrial Complex, technical universities and research institutes of the Academy of Sciences of Russia. Most qualified specialists from across the country would be recruited to these laboratories that provide the most favourable conditions for conducting research.

Nearly half a million Russian scientists fled the country in the decade following Soviet disintegration as scientific research was relegated to the back seat in the Yeltsin years. Hundreds of research centres, institutes, construction bureaus were closed  throwing thousands of scientists to the streets and delivering a heavy blow to the national economy, particularly to its military industrial complex .

President Yeltsin and his prime minister Igor Gaidar ignored the fact that the military industrial complex formed the backbone of Russia’s economy and constituted the power house of cutting–edge technologies of the future. Russia’s current leadership, aware of this fact, plans to accelerate socio-economic development in the country by revamping the military-industrial complex. In its attempt to rebuild the economy, the Russian leadership is pursuing a strategy based on scientific-innovation. Revamping the defence industry complex would usher in economic development in the coming years. President Putin has promised to create 25 million high tech jobs under this strategy and the newly created Fund for Perspective Research is a well-conceived step in this direction.

Professor Arun Mohanty is Chairman of the Centre for Russian and Central Asian Studies, JNU and Director of the Delhi-based Eurasian Foundation.