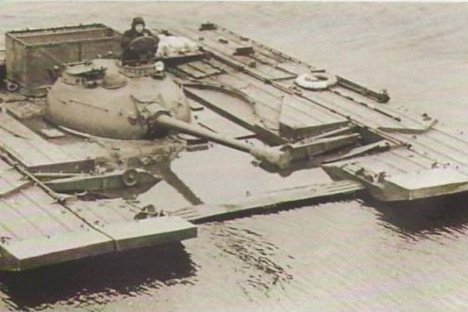 The weight of the PST-U was about 10 tonnes and its movement on water was carried out by a power transfer of the leading tank wheels to two propellers. Source: Press Photo

Project 80 called for the equipping of a medium tank with a flotation device, consisting of two high-speed hydrofoil cutters.

It was always a difficult task for heavy armoured vehicles to overcome water obstacles, moreover, when we consider that during military operations, ferries and the bridges are usually destroyed by the retreating enemy. In the history of tank construction, there are many examples of machines created for crossing to the opposite shore and to be used in water.

Soviet engineers and designers, with great difficulty, tried to find some ways for the creation of a floating hydrofoil tank. This was due to several reasons. The first was the complexity and the time-consuming process of making ordinary, medium or heavy tanks to go underwater and to have light armour. Second, it was impossible to install powerful weaponry on light-armored amphibious tanks. What was required was an amphibious cannon-proof armoured-tank with weapons of, at least, a medium tank. It had to be capable of participating in fast amphibious operations to seize a bridgehead on a shore, of destroying coastal fortifications and suppressing the enemy’s firing points. As the construction of such a vehicle, that meets such high requirements, seemed almost impossible, the tank designers were proposed another solution to this problem. One of those options suggested the improvement of the vehicle without making significant changes in the design, namely equipping the ordinary medium serial-production tank with special mounted water devices. These changes allowed the machine to transform into a river or sea vessel, and at the same time to combine the best merits of a medium tank and a high-speed water transport.

One such project was implemented in the USSR in the middle of the last century and it was called Project 80.The work in this area began in the Soviet Union in 1951. It began with the development of special pontoons attached to the tank, which allowed the machine to stay afloat and move through the water on its own. The first two projects involved the installation of this equipment on the T-54 and T-55 serial-production tanks. Both projects were successfully implemented.

Named the PST-63, this watercraft, with minor modifications, was accepted into service in 1965. Source: Press photo

Later, in 1959, it was decided to unify all the samples, and then, the new equipment was called PST-U, and under this name, it was accepted into service by the Soviet Army in 1960. The weight of the new PST-U was about 10 tonnes and its movement on water was carried out by a power transfer of the leading tank wheels to two propellers. The maximum speed on the water was about 12 km per hour, while on land (with the mounted PST-U) it travelled at no more than 20 km per hour. However, the big weight and complexity of pontoons’ installation on the tank demanded improvements of the PS. The investigations in this direction did not stop, and in 1962, they tested the new PS.

The next prototype was 4.5 tonnes lighter, which allowed increasing the maximum speed on land up to 25 kilometers per hour, and on the water up to 14 km per hour. This fact significantly reduced the load on the chassis of the machine. Installation of additional fuel tanks increased the travel range to 110 km. Named the PST-63, this watercraft, with minor modifications, was accepted into service in 1965. Later the PST-63 was improved to the PST-64 and PST-64 M.

Project 80 called for the equipping of a medium tank with a flotation device, consisting of two high-speed hydrofoil cutters. This project was developed in the Volga Baltic Watercraft Project Design Department, at that time headed by Mikhail Shchukin.

In the beginning of 1966, the model of the future craft was built, which satisfied various design solutions, and then in 1967, the first prototype was made, which was immediately sent to sea trials that took place in the Black Sea, near Sevastopol. During the tests, the maximum reached speed was 58 km per hour, which was higher than the design requirements of 50 km per hour. However, further testing indicated failure due to insufficient strength of the hull. The stay, preventing separation of both sides carrying the cutters, cracked. Thus, the cutters dispersed in different directions and the tank sank. Fortunately, there were no victims and the machine was soon raised. Later, a special committee was created to establish the cause of the accident. After a series of investigations, committee members concluded that the reason of the stay cracking was a small cut in its middle part. It remained unknown whether this had been done intentionally or by negligence.

Nevertheless, within a short period, these drawbacks were eliminated, and the new Project 80 watercraft was implemented. 13 such watercrafts were made. Cutters, used in Project 80 were made of high-strength aluminum alloy, equipped with M-50 diesel engine with a capacity of 1,200 horsepower. The complete installation of the floating devices on the tank took about an hour, and “dumping” occurred within 3 minutes.

In 1971, the project was cancelled because of inexpedience and lack of future prospects.