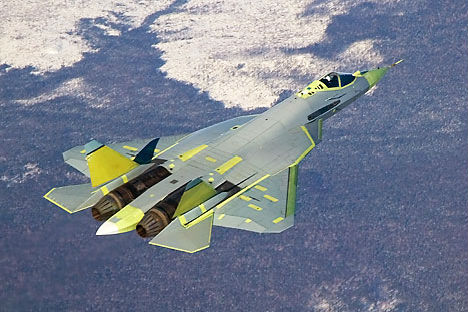 The Indian fighter jet will be based on the Russian single-seat Sukhoi T-50 or PAK-FA fifth-generation fighter. Source: Sukhoi

The reports criticising the Indo-Russian project are aimed at diverting attention from the financial problems that the Indian Air Force will face if a contract to purchase Rafale jets is signed, according to Konstantin Makiyenko.

Cuts in India’s defence spending and the cost escalations for buying and setting up licensed production of the French Rafale multirole fighters are the main reasons that certain Indian media outlets have waged campaign against the FGFA (Fifth Generation Fighting Aircraft) Russian-Indian project, Konstantin Makiyenko, deputy director of the Center for Analysis of Strategies and Technologies told the Red Star military newspaper.

Makiyenko believes that the criticism of the FGFA project in the Business Standard is unfounded and aims to divert attention from the financial problems that the Indian Air Force will face if a contract to purchase Rafale jets is signed. At issue is the purchase of 126 obsolete machines, he told Red Star.

The Russian strategic analyst noted that under the current economic conditions, the French fighters cannot be purchased without cutting spending on other programs. “Going ahead with this project threatens to consume the whole budget for modernizing the Indian Air Force and will leave the country without any fifth-generation technologies,” Makiyenko said.

According to him, the accusation that ‘Russians have been reluctant to share design information’ is completely untrue.  “Russia and India are working on the project together, and all information about it is available to Indian engineers and designers,” Makiyenko said.

The FGFA project began following a Russian-Indian agreement on cooperation in the development and production of the perspective multirole fighter, signed on October 18, 2007.

The Indian fighter jet will be based on the Russian single-seat Sukhoi T-50 or PAK-FA fifth-generation fighter, which now has four prototypes flying, but it will be designed to meet about 50 specific requirements by the Indian Air Force (IAF).

India is expected to foot a much higher bill for the Rafale fighters. When French aircraft maker Dassault Aviation won the deal to supply its Rafale fighter jets, it quoted around $60 million per jet. According to a report on DNA, the cost has gone up to $120 million per jet. “The price hike would mean that the deal would cost India nothing less than $28-30 billion,” the paper quoted an Indian Air Force official, who is privy to discussions of the cost negotiation committee, as saying.