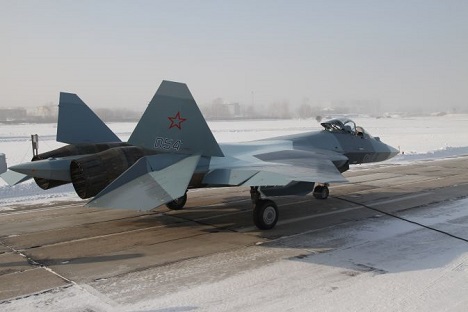 The initial version of the FGFA being created jointly by India and Russia will be ready for flight testing in 2014. Source: Sukhoi

The Russian Ambassador to India said there were no official complaints from New Delhi about Moscow not fulfilling obligations under the Indo-Russian fifth generation fighter aircraft. Other senior Russian defence officials echo the ambassador’s views.

Russia fulfils all of its obligations under the fifth generation fighter aircraft (FGFA) programme with India, Russian Ambassador to India Alexander Kadakin said at the Defexpo-2014 security systems exhibition in New Delhi.

“We pay no attention to negative publications that appear from time to time and claim that Russia does not fulfil its obligations under the fifth generation fighter aircraft programme. Russian-Indian military-technical cooperation under this programme develops as scheduled, and we have not received any official complaints from the Indian side,” he said.

Vyacheslav Dzirkaln, Deputy Director of the Russian Federal Service for Military-Technical Cooperation, told Itar-Tass at the exhibition that all such publications had been written to order.

Commenting on one such article in the Business Standard, Dzirkaln said it was not true. “There is some speculation regarding the development of the Russian-Indian fifth generation fighter aircraft programme, but it’s not surprising because the Indian Air Force, as the customer, would like to get the ‘hardware’, while budget funding has been disbursed for research and development,” he said.

“We have no official complaints from India with regard to the fifth generation fighter aircraft. All negotiations take place under the agreements reached earlier,” Dzirkaln said.

The newspaper said the Indian Air Force (IAF) had “alleged the Russians would be unable to meet their promises about its performance.” On December 24, 2013, in a meeting in New Delhi chaired by Gokul Chandra Pati, the secretary of defence production, top IAF officials argued the fifth generation fighter aircraft (FGFA) had “shortfalls… in terms of performance and other technical features.”

The initial version of the FGFA being created jointly by India and Russia will be ready for flight testing in 2014, the Times of India said earlier, quoting the Chief of the Air Staff and Air Chief Marshal Norman Anil Kumar Browne as saying.

“The two sides are close to signing a key contract expected to be worth over $11 billion for research and development phase of the project in the near future,” the newspaper said.

“The first prototype of the FGFA is scheduled to arrive in India by 2014 after which it will undergo extensive trials at the Ojhar air base (Maharashtra)...we are hopeful that the aircraft would be ready for induction by 2022,” Browne told PTI.

The IAF Chief was in Russia in August 2012 to review the progress made in the programme and the prototypes of the aircraft developed by the Sukhoi Design Bureau at Zhukovsky there, the newspaper said.

“Russia has already given the draft R&D contract to us. It will include the cost of designing, infrastructure build-up at Ozar, prototype development and flight testing. So, India will have scientists and test pilots based both in Russia and Ozar during the R&D phase up to 2019. HAL will subsequently begin manufacturing the fighters,” the newspaper's source said.

“It takes some time to create a plane. The manufacture of such a sophisticated piece of equipment is a science-consuming process that requires big investments. At least six to ten years will pass before we build a sample of the fifth generation fighter plane and being its serial production,” Fomin said.

In the future, Russia and India plan to sell these planes not only on the national markets, but also in third countries. “We will export it in cooperation with Indian partners,” the official added.

According to Indian media reports, the two parties will invest $8-10 billion in the project. Experts believe that the new plane will exceed Western analogues by the cost-efficiency criterion and will not only enhance the defence capabilities of the Russian and Indian navies, but will also take a worthy place on the world market.

It usually takes about 3-4 years to test new planes before their mass production can begin. Russia's new plane may as well fit into this schedule, especially since its maiden flight proved its reliability in different regimes.