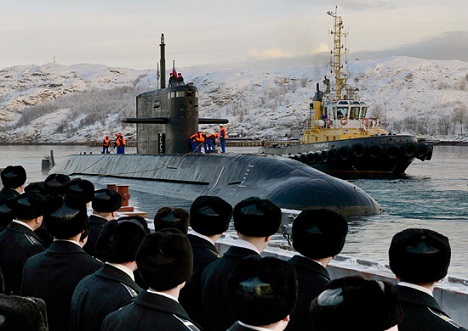 The project 1650 Amur-class submarine is an export model of the fourth-generation project 677 diesel-electric submarines, such as Sankt Peterburg (photo). Source: mil.ru

Russian designers would be able to place BrahMos missiles on Amur subs and also incorporate the Indian-made air-independent propulsion system into the Amur design.

Russian shipbuilders could adopt the design of submarines for an upcoming Indian tender to accommodate Brahmos missiles and an Indian-made air-independent propulsion system, the Rubin design bureau said Thursday.

Russia is planning to offer its fourth-generation Amur-1650 boats in India’s prospective $11.8-billion tender for the supply of six “stealth” diesel-electric submarines. France, Germany and Spain have also said they will take part in the tender, which the Indian Defense Ministry is expected to open in the near future.

“We have considered arming Amur-1650 with vertical launchers, and have made significant progress in designing these launchers for our Club-S missile systems,” said Igor Molchanov, chief designer at St. Petersburg-based Rubin.

Molchanov also said it would be possible to place BrahMos missiles – developed jointly by India and Russia – on Amur subs if requested, and that doing so would not affect the overall performance of the submarine.

Molchanov said Russian designers will also be able to incorporate the Indian-made air-independent propulsion system into the Amur design.

He said, however, that the Russian system was more efficient and safe compared to the Indian model as it does not require supplies of hydrogen to be carried on board the submarine.

“We get hydrogen from regular diesel fuel, which is cheap. They use more expensive technologies,” Molchanov said.

The Amur-1650 has an armament of multirole torpedoes and anti-ship missiles, and can also effectively engage land targets with advanced cruise missiles.

India is currently building six Scorpene submarines at the Mazgaon Dockyards Limited under a deal with France’s DCNS. However, the Indian side says it needs submarines “with better stealth capability, improved detection range and [improved] combat management system.”

According to the Indian navy, the six new vessels must have land-attack capabilities as well as air-independent propulsion, which substantially enhances a diesel-electric submarine's capability to stay underwater without frequently surfacing to get oxygen to recharge its batteries.