MS-21 to compete against Boeing and Airbus 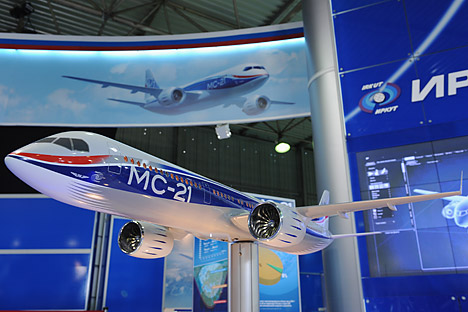 The MS-21 will have a lower empty weight than its competitors, as well as better aerodynamics and more efficient engines. Source: Grigory Sysoev / RIA Novosti

The new-generation Russian passenger aircraft, manufactured by Irkut, is set to take on foreign makes in the global market.

Russian aircraft manufacturer Irkut Corporation is building the first three prototypes of what it calls ‘the Airliner of the 21st Century,’ or the MS-21. This new-generation passenger jetliner is key to the government's program to develop civil aviation.

The first prototype is expected to be rolled out in 2015, followed by certification one year later. The airliner is targeted at the Russian and foreign markets.

To survive in the current aviation market and compete against the best-selling aircraft types in its segment, the new Russian airliner needs to meet stringent criteria, the most important two being performance and fuel efficiency. These parameters are vital to airlines, which seek to save on operating, maintenance, and fuel costs.

Irkut says the MS-21 will have a lower empty weight than its competitors, as well as better aerodynamics and more efficient engines. Potential customers will be involved in the development process from the very first days.

The MS-21 will have a reconfigurable cabin layout, allowing operators to select the optimal seat and aisle widths. The overhead bins and cargo holds will be adjustable for capacity.

The MS-21 will be pitted against the latest modifications of the Airbus A320 and Boeing 737 narrow-body families. Even though Irkut is lagging behind in terms of annual production output (projected 40 airframes, against around 500 each for Airbus and Boeing), the positive market experience of another Russian jetliner project, the short-range Sukhoi Superjet 100, is encouraging. The Superjet is already in service with several airlines around the world.

“The Superjet 100 has been operated intensively in Laos and Indonesia since 2013,” says Andrey Fomin, editor-in-chief of Russia's premier aviation magazine Take-Off.  “Last fall, airliners of this type started flying in Mexico,” Fomin said. “They are performing quite well there, so it is possible that new customers will crop up in the near future, including from the Western Hemisphere. The marketing tactics used for the Superjet are now being proposed for the MS-21”.

At the MAKS 2013 exhibition, Russia's United Aircraft Corporation signed $7.5 billion worth of contracts, a sum split evenly between the Sukhoi Superjet and the MS-21.

There are currently around 170 orders for the MS-21, all of them from Russian carriers. The aircraft is planned as a replacement for the ageing Soviet-made Tupolev Tu-134 and Tu-154 models, as well as for the younger Tu-204 type, which has proved uncompetitive on the global market.

“If you want to get customers interested you have to come up with a completely new airliner,” says Roman Gusarov, editor-in-chief of the Internet portal AVIA.ru Network. “This is what our aircraft enterprises, including Irkut, are attempting to do. All hopes for the resurrection of the country's civil aviation sector are pinned on the MS-21 program. If it proves a success, then another serious rival will emerge on the mainline passenger aircraft market.”