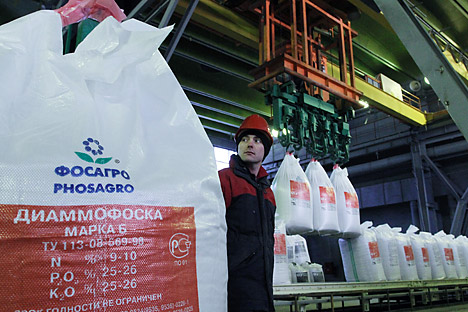 Largely on account of low prices, the Russian fertilizer company plans to pause sales of diammonium phosphate to India and focus on the domestic market and Europe

Unhappy with the low prices in the Indian market, Russian fertilizer giant PhosAgro is on the lookout for new markets. The company outlined a wide search area. “We intend to focus on the markets of Europe, Latin America, Africa, Southeast Asia, Russia and the CIS,” a Phosagro source told RIR.

The Russian company considers the domestic market as a priority, since it is growing twice as fast as the global market. The company has created its own distribution network in Russia and fertilizer supply to the domestic market has more than doubled over the past few years.

India is one of the world’s largest importers of fertilizers, but heavy competition has led to low prices. After the government refused to support farmers, they began to cut spending.  When it comes to fertilizers, in India the preference has been made in favour of carbamite.

Anatoly Voronin, analyst at the FIBO Group, feels that a price war might soon start in the Indian fertilizer market, and PhosAgro does not want to participate in it. The existing orders allow loading the company’s production capacity at almost 100 percent, so it will look for buyers in the premium markets.

PhosAgro sources confirmed to RIR that the company did not intend to sell DAP (diammonium phosphate) to India this season.  Until last year, the Russian company, which is the world’s second largest producer of DAP and MAP (mono-ammonium phosphate), annually supplied 1 to 2 batches of fertilizers to India, totalling about 1 million tonnes, depending on the market situation. The maximum supply of 1.215 million tonnes was recorded in 2009. However, the company says in 2013 it did not supply a single tonne of DAP/MAP to India, and only in the 4th quarter, a minimum batch of NPK (a complex fertilizer containing nitrogen, phosphorus and potassium) was shipped to the tune of 32,000 tonnes.

However, the company is not going to shut the door with a bang. If prices rise, it will return to the Indian market.

Prices of DAP were really below the global price in India, confirmed Oleg Dushyn, analyst at Zurich Capital Management. According to him, while the commodity price is $475, the cost of supplies to India, together with the freight is $425. “Due to the drop in the exchange rate of the rupee against the US dollar and the reduction of government subsidies for fertilizers (since 2012), DAP imports into India have been reduced,” Dushyn said. “The major suppliers are China, the United States and Saudi Arabia. Russia’s share is small – 2.2 percent in 2012. The presence of Phosagro has been reduced to a minimum in the market, due to unattractive prices,” he told RIR.

According to the analyst’s estimates, the share of income, received by PhosAgro in India, has rapidly declined in recent years. Thus, while India provided 12 percent of PhosAgro’s revenues in 2011, in 2012, it was already just 7.2 percent, and in 2013, it was probably less than 1 percent.

A significant contribution to the reduction in fertilizer prices was also made by the last year’s conflict around the consortium of Belaruskali and Uralkali, because of which, the Russian company left the joint project – Belarusian Potash Company. Now the conflict has been settled, and the prices are creeping up again. “If we talk about 2014, we believe that the impact of the resolution of Uralkali to stop export sales through BPC for the whole market has practically ceased to have a meaning,” PhosAgro said in a statement. “We have noted that prices of basic phosphorus fertilizers are starting to normalize, as the demand, strengthened by favourable conditions in the agricultural market, is being restored before the beginning of seedtime in the major markets. Even now, despite the off-season, the average price of DAP exceeds $485 per tonne. We hope that the stabilization of the phosphate fertilizer market will continue.”

There are other positive factors. Among them, PhosAgro named favourable prices of basic agricultural products, closing of the export “window” by China (now Chinese producers have to pay high export duties for export sales) and low stocks in major markets, including India. The company’s specialists also expect business activity in the premium markets – the U.S. and Western Europe.

Oleg Dushyn believes that the most promising markets for PhosAgro, which has been ousted from India, are the countries of Southeast Asia (Thailand and Vietnam) and Brazil. He said the company opened a trading office in Singapore in October 2013, in order to increase fertilizer sales to consumers in New Zealand, Australia, Asian and African countries. According to his estimates, a similar centre may be established in Latin America in 2014. “There is interest in the development of the internal market – in October 2013, the Federal Antimonopoly Service allowed PhosAgro to join warehouses in Rostov and Orel Region, and in the Kuban into a unified distribution network,” Dushyn said. “In January 2014, the administration of Vologda Region and PhosAgro signed an agreement on the provision of farmers of the region with mineral fertilizers in 2014.”