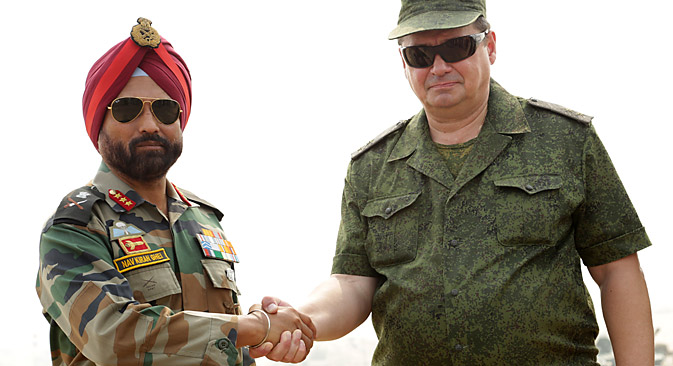 Defexpo India 2014 has reaffirmed the special relationship that exists between the defence industries of Russia and India. The pavilion that housed exhibits of Russian companies was visited by top members of the Indian establishment, including the defence minister of India A K Anthony and thousands of professionals and residents of Delhi.

At the exhibition, the Russian and Indian defence industries had a chance to summarize the experience they have gained through cooperation and make plans for future projects that our country will most likely begin after the parliamentary elections in India.

The arrival in India of the INS Vikramaditya, a modernized Russian aircraft carrier, was a distinctive milestone in Russian-Indian military cooperation. The completion of this multimillion-dollar project was truly symbolic. And during the exhibition, it was reported that an Indian pilot made the first takeoff and landing from the aircraft carrier.

Organizers announced that the main theme of the exhibition was supporting and developing India's defence industry. In back rooms and at press conferences, the common talk was that the Indian industry must transition away from making mass purchases of military equipment, on which they spend up to $2 billion annually, to developing an indigenous industry and working on joint projects with partners. According to Vyacheslav Dzirkaln, the head of the Russian delegation at the exhibition and Assistant Director of the Federal Service for Military-Technical Cooperation, Russia's relations with India reached this level long ago.

“We have been saying for a long time that we have progressed from a buyer-seller relationship to more fruitful cooperation,” Dzirkaln said. “A striking example of this is the BrahMos joint venture. Bilateral cooperation is growing in the high-tech weapons field; the Indians are also actively developing missile technology.”

The defence interactions between the two countries are now quite diversified. Almost every defence contract provides for the creation of joint ventures or licensed production. Indian subcontractors are actively involved, which reduces costs and engages Indian companies in part of the work.

JSC Uralvagonzavod scientific production corporation presented models of military equipment at its booth: the Msta-S 155-mm self-propelled 2S19M1 howitzer, the modernized T-90SM tank, and various options for upgrading the T-72 tank. The company has already worked successfully on the Indian market for many years, having supplied several hundred tanks. Uralvagonzavod specialists have set up licensed production of T90S tanks in Avadi, in the state of Tamil Nadu. It is expected that India will independently produce more than 1,000 of these combat vehicles.

One of the most attractive and promising areas for India is computer-guided weapons. The Russian leader in this field is the Morinformsystem-Agat Concern.

“This is the first international exhibition at which we have presented ourselves as a single concern, because our company has a large number of subsidiaries, more than 15,” Maria Vorobyova, a spokesperson for the Concern, told RIR.

According to Vorobyova, the goal for participating in the exhibition was to reset relations with India. Recently a new defensc procurement program was adopted here and new procurement policies are in place. Indian now wants to produce up to 30 percent of value added products domestically and is aiming to set up joint ventures.

“Actually, we came to offer them options that will be advantageous both to us and them and that fit within the framework of the strategic relationship that currently exists between the two countries. We cannot offer our other partners this level of cooperation at the moment,” explained Vorobyova.

Morinformsystem-Agat Concern is developing relationships not only with Indian state-owned companies, but also with private ones. In particular, Mazagon Dock and Pipavav Shipyard have expressed interest in cooperating with the concern. The company has signed several memoranda on various activities with Pipavav.

JSC Orion Concern and the Azimut group of companies also signed an agreement of intent with India's Tata Power SED that provides for joint development of automatic control systems for transport infrastructure and security systems, as well as jointly developing and supplying avionics, navigation equipment, and guidance systems for civil aviation.

“These are new areas of cooperation that involve the civilian sector,” said an Indian official who is familiar with the negotiations between the parties. According to him, both sides are interested in increasing the civilian share in trade between the countries, as was stated at the last intergovernmental commission.

The potential for cooperation in information systems between the two countries is still untapped. Until recently, the emphasis had been on large contracts for warships and land-based military equipment. Now companies of the two countries have become interested in cooperating more closely in cutting-edge technology.

However, traditional areas of cooperation will not be forgotten. RIR has learned that, in addition to new warships and submarines, India is also interested in acquiring Russian vehicles. According to a source close to India's defence ministry, talks are underway for the purchase of 100 to 500 new Ural trucks that would be used by the Indian home and defence ministries. The truck model costs $50,000.

“Talks have been ongoing for three years now, and soon the contract will be ready to be signed,” said the source.

The UAZ Automobile Plant is part of the GAZ group of companies, and has been working with the Indians for some time. A joint automobile assembly plant has been operating near Calcutta since 2006. To date, 190 vehicles have been assembled there.