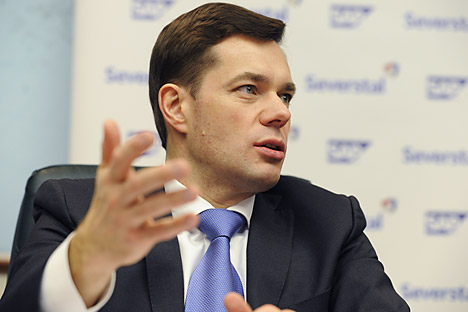 The steel industry is again in crisis and new market conditions are stimulating new requirements for companies. Steel manufacturers need to be as efficient as possible, and buying up assets is no longer profitable. Alexey Mordashov, Chief Executive and owner of Russian steel-producing giant Severstal, discussed the company’s strategy and tactics.

Do the current events in the market constitute a new crisis? Compared to 2008, is the situation better or worse?

I think this is a new wave of the recession. The problems caused by the previous recession were not completely solved. We are currently in economic conditions that resemble late 2008–early 2009.

But on the whole, isn’t the Russian economy in a worse situation than in 2008?

I wouldn’t say that. Russia is in a significantly better situation. I think Russia is more prepared for a crisis than it was in 2008. The government’s actions are aimed at making the market more transparent, and this is good. It’s good that there is effective dialogue between the business sector and the authorities. There are working groups, and key decisions are made after discussion.

You are calling on steel companies to cut production in order to balance supply and demand. Why has this become necessary?

Capacity utilization is currently too low. According to assessments by the World Steel Association, in 2013 the average utilization was around 76 percent. This results in substantial pressure on prices and lower margins for all producers. According to McKinsey, around 67 percent of companies are generating negative cash flow. On this count, Severstal is a positive exception. Our margins and results are respectable, and on the whole, we have relatively low debt.

Despite the growth in steel consumption (around 3 percent–4 percent per year), there will be excess capacity until 2018. Limiting oversupply could be a solution to the problem, but only if different countries, companies, governments, the WTO and other parties participate.

This came from the influence of external circumstances and the understanding of what would be right. Foreign assets were acquired on the basis of information on the annual growth of steel consumption (7 percent–8 percent), the growth of China’s economy (10 percent–12 percent annually), and its plans for industrialization and urbanization. This was a period when everyone expected more aggressive growth, and many sectors in the world were entering this growth. We bought three American plants, which we subsequently sold. In June–July 2008 they yielded $40 million in EBITDA in a month, but in 2009 they were posting more than a $900 million loss.

We sold the three American plants for much less than what we bought them for and we deconsolidated Lucchini (it is now completely controlled by the banks). Now we’re in a more stable position than some other companies.

Where are the best prospects now?

They are where there are growing markets, where there are the most discerning buyers, where it is possible to produce with the lowest costs. In this sense, Russia is the most attractive region. The second area where we are working is the United States. Of the developing markets, the US market is showing the best indicators.

What are Severstal’s current priorities?

The first is a large rate of return for the company, one that yields a steady cash flow. We’d like to remain “leaders in value creation.” Stability and reliability are needed for this. In percentage terms, the rate of return means that the EBITDA margin is no lower than 20 percent. We posted 17 percent in the third quarter of 2013 (compared to 13 percent in the first six months), plus low debt. Now, our debt/EBITDA ratio is at level 2. We think that a comfortable level is 1.5, and we intend to move in that direction. We were recently at level 1, and our debt has remained unchanged, but due to constriction, the EBITDA measure increased.

Second, we need to have low expenses, through efficiency, in all processing stages, vertical integration and low prime cost. Our metallurgical production in the United States needs to be among the 25 percent most efficient assets in the world in terms of expenses, and Russian production needs to be in the top 10 percent. Raw material assets also need to be among the top 50 percent.

For all assets there need to be low working capital and reasonable capital expenses—we have set a limit of $1 billion.

Another one of your companies, Nordgold, quickly became a leader in gold extraction, but from the moment of its public listing in 2012 it lost more than five times its value. The main reason was the decline in gold prices. Has the era of high gold prices come to an end?

The price [of gold] has fallen, but it is still higher than it was in the late 2000s. The peak in gold sales is over. We can’t wait for aggressive demand in gold from jewelers, but it will nevertheless remain high enough and will still grow, albeit more slowly, as we are seeing rather large growth in the economies of developing countries, such as India—these are major consumers of gold.

At the current price, many producers are no longer generating free cash flow. Nordgold is, even if it is not high. The average prime cost for the industry is around $900 per ounce. Moreover, the average prime cost of gold extractions adjusted for capital investments in active assets is around $1,100. At such prices, like now, it is possible to expect that gold production will stabilize or will drop slightly. As a result, the relatively stable demand and the closing of funds provide definite hopes for an upside. Governments and large holders of gold will also need to unprofitably sell gold at low prices. It turns out that we are not seeing the fundamental factors that should so radically lower gold prices. No frenzied growth is expected either. The main thing is to be steady and efficient. It’s the same for gold as for steel: back to fundamentals (low expenses, effective capital investments, profitable licenses allowing production to be maintained). We have reserves for 13 years, and we are planning to increase them and add new production facilities.

Are you interested in Sukhoi Log (according to preliminary assessments, the largest gold ore deposit in Russia)?

This is potentially an interesting facility. It is interesting to any gold producer. We would be interested in examining the sales conditions of Sukhoi Log. It is up to the government to decide when this will occur. We would indeed like to acquire new deposits—for gold it is important to have a steady set of projects in order to guarantee production continuity.

Are you looking at purchases in Russia or abroad?

Any type of purchase… We don’t have any preconceptions or preferences. We’re happy to buy any asset. We have three working mines and several projects in West Africa. We can find a common language with interested parties in a variety of jurisdictions in a variety of countries. Doing so isn’t easy, but in life nothing is easy.

Do you plan to enter any new machinery sectors?

We are seriously considering various possibilities. With Siemens we are developing production of gas turbines. OJSC Power Machines (a Mordashov-owned company) bought the Krasny Kotelshchik plant, entering the sector of releasing boilers and large shells. This will enable us to look at different sectors: the manufacture of filters, chemical equipment, the manufacture of equipment for metallurgy and the petrochemical industry. Of course, we are looking at new related industries. Power Machines will develop not only more deeply, but also more broadly. But we are unlikely to go into biotechnologies or medications.