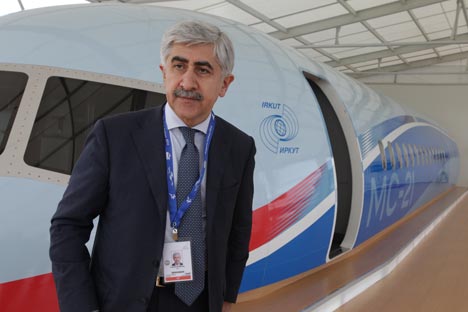 The 31st session of Indo-Russian Subgroup on Aviation (IRSA) was held in New Delhi on February 20. The biennial event discussed concerning the manufacture, repair and overhaul of aircraft, aero engines and accessories. The IRSA is a sub-group of the Indo-Russian Inter Governmental Commission on Military Technical Cooperation (IRIGC-MTC).

The Russian delegation at the meeting was headed by Mikhail A. Pogosyan, president of the United Aircraft Corporation (UAC) and included representatives of Rosoboronexport and Russian Federal Service for Military-Technical Cooperation.   Dr R.K. Tyagi, chairman of Hindustan Aeronautics Ltd (HAL) headed the Indian side, which comprised of representatives from India's defence ministry and air force.

“IRIGC-MTC is one of the most important elements in military-technical cooperation projects between Russia and India,” Pogosyan said. “The work we do here allows us to concentrate on the development of specific solutions relating to the implementation of advanced technologies and innovative forms of organizing production cooperation. Together with our colleagues at HAL and the Indian Air Force, we defined the main focus of our efforts: an increase in the accuracy of the fleet of Russian-developed aircrafts. With this goal in mind, we closely analyzed all the technical and organizational factors that could affect the operational characteristics of the aircrafts and developed a plan for cooperative actions,” Pogosyan added.

The two sides discussed the licensed production, reconstruction, and modernization of Su-30MKI, the modernization of the Indian Air Force's MiG-29 aircrafts, supply and technical assistance for the MiG-29K/KUB aircrafts, which are deployed on board aircraft carriers. Also on the agenda was the development and production of AL-55-I aviation motors for Indian Air Force (IAF) jet trainer planes, and progress on the fifth generation fighter aircraft (FGFA) programme and the IAF’s multirole transport aircrafts.

After the New Delhi session, the IRSA sub-group visited HAL's Su-30MKI fighters’ production facility and the IAF's overhauling base in the city of Nasik.

“They had first-hand impression of the state of the art facilities created for Su 30 MKI manufacturing and overhaul facilities at Nasik,” Dr Tyagi said. UAC said in a press note that the talks added an “extra positive impulse to the realization of bilateral projects.”

“The head of the Russian delegation also met with the families of Russian specialists who help the Indians master the technologies involved in the production and repair of Russian-developed aircrafts. The co-chairman of the IRSA will present the most important decisions of the committee’s final protocol to the Russian and Indian Defence Ministers” UAC added.

First published in Russian by Aex.ru