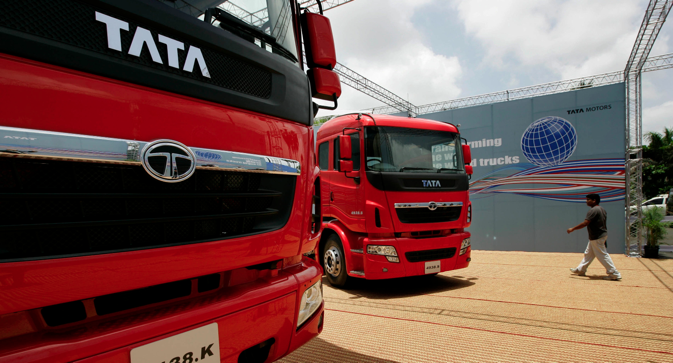 Tata Motors is currently evaluating all possible scenarios to remain competitive and achieve its strategic objectives for the Russian market. Source: AP

The Indian automobile giant recently announced the re-launching of its operations in the Russian commercial vehicles market. Industry experts believe Tata trucks and buses can find customers even though the market is not in its best shape at the moment.

India’s biggest automaker by revenue has had a presence in Russia since 2004, the company spokesperson told RIR. It tied up with JSC Ural Automobiles and Motors (AMUR) based in closed city of Novouralsk, Sverdlovsk Region, known for assembling famous soviet-era ZIL trucks. The three-year contract with Amur for co-productions of Tata-407 and Tata-613 models branded as Amur-4346 was never fully realized.

“By 2007-2008 we had achieved reasonable success with our LCV truck LPT 613.  However, Russia went through difficult times during the economic crisis of 2009 which led to the collapse of many industries including the automobile industry,” a Tata Motors spokesperson said.

The AMUR factory, privatized in 1992, could not survive the market competition and went bankrupt after a decade.  Burdened by heavy debt load till today, the plant was not able to find investors. The factory stopped operations in 2012 and currently is set for bankruptcy auction.

According to analytical agency Autostat, Russia has more than 3.75 million units of commercial vehicles with more than 54 percent of the vehicles being more than 10 years old.

The Russian automobile market dropped dramatically during 2008-2009 years of financial turmoil and could reach the pre-crisis levels only by 2012. In 2012, total sales of new light vehicles (LCV) increased by 11 percent over 2011 exceeding the record figures of 2008, according to Ernst & Young 2013 industry report.  The highest year-over-year growth was registered in the first months of 2012.

However, in 2013 all segments of commercial vehicles market started declining again and this trend will remain in 2014, experts project.

“We are not expecting the market to grow in the near future. There are several reasons. First of all, the present condition of Russian economy, slowdown of Russia’s GDP growth and projected low GDP growth rates in future. The resource dependence won’t let the economy grow intensely, which brings negative prospects for the automobile market as well,” Azat Timerkhanov says.

He adds that the negative market dynamics can pose difficulties for Tata Motors plans in Russia. Igor Arnautov, analyst with Investcafe, agrees.  “It’s not the best timing to enter the market as heavy truck and CV segments reached saturation. The sales of LCV in 2013 decreased 3.4 percent and HCV segment decreased almost 30 percent,” he adds.

On the other hand Russia remains one of the most attractive markets in Europe due to low light vehicle density and advanced age of car fleet, as well as government policies aiming to update the fleet of commercial vehicles in the country, Ernst & Young experts note.

“Russia is one of the largest Commercial Vehicle markets and has been evolving very fast from the low cost products to high performance products with the entry of many European, Japanese and Korean brands into the market. The regulations are quite advanced and almost catching up with the European Regulations,” a Tata Motors spokesperson said.

The Russian CV market is dominated by domestic brands in all segments. GAZ Group, one of the largest manufacturers of commercial vehicles and automotive components with 13 plants located in 8 regions of Russia leads in LCV segment with more than 40 percent market share and medium truck segment with more than 35 percent share, according to AUTOSTAT. GAZ group refused to comment for this article.

Among foreign players in Russian commercial vehicles market Ford, Volkswagen, Peugeot, Fiat, Mercedes-Benz have the strongest positions. “However, the market share of each is much less than 10 percent. So it’s difficult to name any of them as a strong competitor of the local manufacturers,”- Azat Timerkhanov says.

“Korean Hyundai secures a significant market share, about 15 percent in medium duty truck segment, however, it is still far behind the domestic leader,” he adds.

The similar scenario is in HDT segment where foreign players are represented by Belorussia’s Minsk Automobile Plant (MAZ), Scania, Volvo, MAN, Mercedes-Benz, Shaanxi, DAF and some others. The market share of each brand falls in the range of 4 to 8 percent. The segment is leaded by Russian KAMAZ with market share more than 35 percent.

The bus segment is largely dominated by Pavlovsky Avto Zavod (PAZ) with more than 50 percent market share. The foreign manufacturer with highest presence in this segment is, again, Hyundai, although its market share is not more than 4 percent.

“However, the steady process of replacing buses with light commercial vehicles in urban centres as well as increasing import of LCV of Fiat, Iveco and Mercedes brands which don’t have their own manufacturing in Russia, can help India’s Tata Motors obtain a niche position in the Russian market,” - Igor Arnautov from Investcafe says.

He adds that Hyundai and Mercedes commercial vehicles which are seen as city transport will be the main competitors for Tata products in Russia. In the light trucks segment the major competitors for Indian vehicles are Hyundai trucks that are being assembled in Russia, and Japan’s Isuzu trucks.

“Asian brands have good prospects in the Russian market, first of all, because of the low prices and better quality of some specific models than the Russian analogs,” - Arnautov adds.

Despite tough competition and pessimistic market growth trends, experts believe that Indian commercial vehicles may find their place in the Russian market.  “A lot in this scenario will depend on the price that Tata Motors will offer. It has not been disclosed yet, but probably the focus will be on competing with Chinese and in some points Russian analogs,”  Azat Timerkhanov says.

Tata Motors is currently evaluating all possible scenarios to remain competitive and achieve its strategic objectives for the Russian market. “Russia is an important market for Tata Motors.  It is too early for us to talk specifics of our plans as we are still in the process of evaluating and formulating them. We will announce our plans, once we are ready,” the company spokesperson told RIR.

He added that even though Russian market requires the vehicles to be designed to withstand harsh cold conditions of Russia which can be as severe as -40 degrees Celsius during the winter, Tata Motors can offer a wide product range suitable for Russia’s specific requirements.