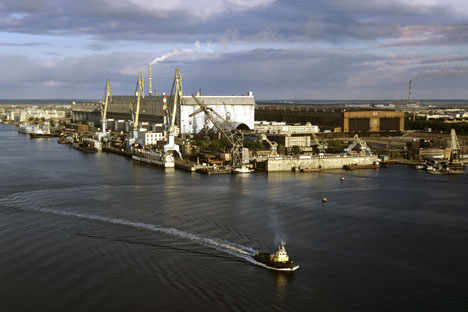 The Severodvinsk-based defence shipyard, which upgraded the aircraft carrier, will handle its servicing and maintenance for another 20 years.

India has chosen Russia’s Sevmash shipyard for post-warranty servicing of the INS Vikramaditya aircraft carrier.  The relevant protocol was signed at the 23rd meeting of the naval subgroup of the Indo-Russian Inter Governmental Commission on Military Technical Cooperation (IRIGC-MTC) in Goa on Wednesday, March 12.

An additional agreement will be signed in May, Sevmash officials told Itar-Tass.

Russia handed over the Vikramaditya aircraft carrier to the Indian Navy on November 16, 2013.

After a complete overhaul of what was called the Admiral Gorhskov, the ship got a new flight deck and a ski-jump ramp for MiG-29K jet fighters, navigation, radar, communication and flight control systems, other equipment and units. Russia also trained an Indian crew of about 1,500 personnel and will build infrastructure for the aircraft carrier in the Indian Ocean. The ship is expected to operate for 25-30 years.

Russia's Severodvinsk-based defence shipyard Sevmash in the northern Arkhangelsk region, which upgraded the Vikramaditya aircraft carrier, will also provide post-warranty services for the ship for the next 20 years.

After the transfer of the ship to the Indian Navy, Sevmash engineers and specialists will provide warranty maintenance services for the aircraft carrier for one year.

During the three-month sea trials the ship demonstrated excellent seaworthiness, speed of 27.9 knots (about 52 kilometres per hour) and manoeuvrability. MiG specialists praised the ski-jump ramp.

All in all, the ship sailed for 19,500 miles during two seasons of sea trials, with 778 flights performed from its deck by aircraft and helicopters.

Russia's Northern Fleet aviation was involved in the sea trials: aircraft and helicopters flew around and over the ship in order to check its radar, air defence, communication and control systems.

During the first stage of the trials in the White Sea, the ship's physical fields were measured, and the crew practiced fuelling and fresh water replenishing operations.

The ship was initially scheduled to be commissioned on December 4, 2012. However its transfer to India was postponed until the end of 2013 after the problems during the sea trials.

Under a package inter-governmental agreement signed in New Delhi in January 2004, the body of the Russian aircraft carrier Admiral Gorshkov, later renamed to Vikramaditya, was transferred to India for free subject to its upgrading at Sevmash and armament with Russian aircraft.

The overall cost of the contract was estimated at $1.5 billion of which about $974 million was intended for the conversion of the ship into a full-scale aircraft carrier. All work was supposed to be completed in 2008. However the completion date has been postponed. According to unofficial data, the final cost of the aircraft carrier is $2.3 billion.

The Admiral Gorshkov was built in Nikolayev under the name of Baku and put to service in the Northern Fleet in 1987.