Novik: A revolutionary in the Russian Navy 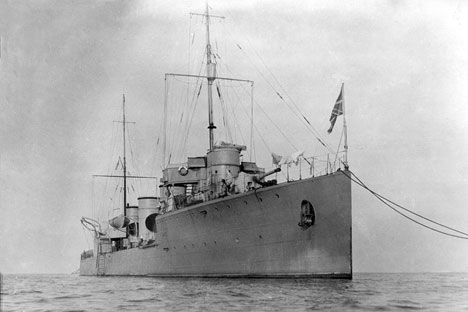 Russia’s first universal fleet destroyer represented a giant leap forward in the country’s naval capabilities. It also had a significant impact on the fortunes of Russia’s Baltic Fleet in World War I.

At the turn of the 20th century, Russian shipbuilders brought about a revolution in the destroyer class of military vessels. Torpedo boats of the time were divided into separate sub-classes of destroyers and anti-destroyers, the first being armed with large mines and torpedoes and the second with heavy gun batteries.

This was the case until 1911, when the next-generation vessel Novik slid down the slipway at St. Petersburg’s Putilovsky shipyard. The prototype of today’s naval destroyers had put to sea.

On August 17, 1915, at the height of the First World War, a battle took place on the Baltic Sea at the entrance to the Gulf of Riga in which a single Russian destroyer devastated two new German destroyers, the V99 and V100. 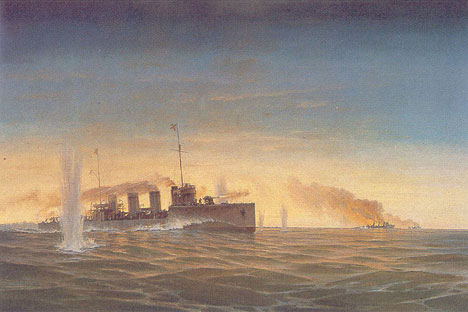 These had attempted to breach the minefield at the mouth of the gulf in order to strike at Russian Baltic Fleet ships, which through a combination of sorties and mine laying had disrupted the German Empire’s supply route to Sweden, the source of iron ore strategically vital to the Triple Alliance of Germany, Austro-Hungary and Italy.

“Novik” was the name given in 16th and 17th Century Russia to young noblemen who took up a career in the military.

After using trawlers to clear a path through the mines, the German ships penetrated the gulf before being intercepted.

The Russian gunners opened fire from a distance of 5.5 nautical miles and the German ships immediately set a parallel course and returned a broadside from every weapon.

Despite the German advantage, the Russian destroyer fired a third salvo at the V99 as it sailed ahead of the V100 and then switched to rapid fire, striking the enemy in quick succession.

The Russian observers spotted smoke in the vicinity of the V99’s engine room soon after and also saw that the middle smoke stack had collapsed, the afterdeck was in flames and the vessel was losing speed.

Sailing to the rear, the V100 laid down a smokescreen to cover its stricken sister ship but in the process took several direct hits to its aft that caused a fire to break out.

A look at Russia's pioneering submarines

The retreating German destroyers made for the protection of the main forces covering them at the gulf entrance, but as the badly damaged V99 reached the mine field it struck a charge and promptly sank.

And so the unique Russian destroyer cut its teeth in battle, having already won international recognition before the war as the best vessel of its class.

Drawing from the invaluable experience of the 1905 Russo-Japanese War, the Russian designers had quickly concluded that separating destroyers into two sub-classes reduced the capabilities of the lighter vessels of the blue-water fleets.

Accordingly, they began to design a 1,300-ton universal fleet destroyer that would field both powerful gun batteries and torpedoes. The ship was also to be fitted with the most powerful oil-fired boilers in its class and three steam turbines with a combined 35,000 horsepower capacity that would produce a maximum speed of 36 knots.

The keel of the Novik was laid at the Putilovsky shipyard in July 1910 and the ship was launched in June 1911. The new destroyer combined the most powerful weaponry of its class, consisting of four twin-barrelled torpedo-launching tubes that could deliver salvoes of eight torpedoes, and four state-of the-art 102mm rapid-fire cannons.

The aft section was additionally fitted with equipment for laying up to 50 anchored mines at a time. In testing the ship achieved the remarkable speed of 37.3 knots over a nautical measured mile.

By comparison, the newest German destroyers, the V99 and V100, were built several years later in 1914. Despite their comparable displacement, they were armed with just four 88mm cannons and six torpedo launching tubes.

Bringing a breakthrough in engineering design and reaping glory during the First World War, the Novik rendered long and distinguished service. Renamed under the Soviet Fleet as the Yakov Sverdlov, it survived the Russian Revolution and the Civil War of the 1920s and was extensively refitted and converted into the flagship of the fleet of squadron destroyers.

It entered the next war with Germany in this role, patrolling and searching for German submarines, and escorting transport ships and primary vessels of the Baltic Fleet.

The destroyer Novik ended its years at sea in battle. On August 28, 1941, while guarding the cruiser Kirov during an audacious attempt by Soviet vessels to break out of German and Finnish encirclement at Tallinn in Estonia, the destroyer hit a mine and sank.