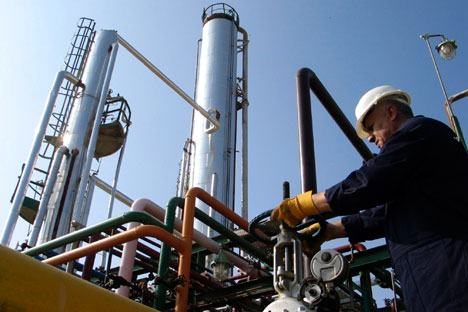 Opting against using foreign currency in settlements with the West would create a big headache for exporters. Source: Reuters

The Russian government is pondering over a move that would require major oil, gas and arms exporters to trade in roubles. Analysts believe that this would create obstacles for exporters.

The possibility of switching to using roubles as the mode of payment for exports is being considered by the Russian government, according to one federal official. He says that it would be logical to take steps in this direction, irrespective of the fact whether there is a crisis in relations with the West or not.

“This topic is being discussed, but we have not prepared any specific documents yet,” the press service of the Ministry of Economic Development and Trade informed news daily RBC.

The head of Russian state-owned bank VTB, Andrei Kostin, has suggested that export companies, especially state-owned ones, should be the first to switch to using roubles in their settlements, justifying this by the fact that the total exports of Gazprom, Rosneft and Rosoboronexport amounted to almost $230 billion per year, or 44 percent of the total volume of exports. In his opinion, this should be one of the key tasks for the banking system, the Central Bank of the Russian Federation and the government.

“Rosneft fulfills its contractual obligations and settles payments in the currency of the concluded contracts,” a Rosneft representative told RBC. Gas giant Gazprom has so far not made an official comment on Kostin’s statement.

Opting against using foreign currency in settlements with the West would create a big headache for exporters.

In order to pay for Russian oil, gas and weapons in roubles, our foreign partners will first have to buy roubles from Russia for dollars and euros, paying an additional exchange fee at that, and then they will have to give these roubles back through exporters.

“They will have to perform an unnecessary operation, and the buyers will incur additional transaction costs as a result,” says Yegor Dvinyanin, analyst at ACG Gradient Alpha.

“This is pointless from an economic point of view. As a result, we will have to sell our products a little cheaper, in order not to upset the balance, that is, we will get smaller profits,"

In addition, the exchange rate of the rouble, in contrast to dollar and euro, cannot be considered stable.

“The most important thing for cash flows in the business world is the stability of the exchange rate. This cannot be said about the Russian currency, which can lose 15 percent within six months, or grow from year to year, in the event of a long trend of growing prices for energy resources,” says Alexander Kuptsikevich, a financial analyst at FxPro.

Therefore, when commercial settlements are made, the choice is made in favour of more stable currencies – the dollar and euro, or other standard units, based on large rather than regional economies, he adds.

As far as raw commodities are concerned, prices are greatly dependent on world prices. “In any case, prices on the oil and gas market are formed in dollars. Even if we put a price tag in roubles for our oil, it will still be tied to the cost of the dollar and oil price in dollars,” said Mikhail Khromov, a leading expert for the Centre for Structural Studies at the Gaidar Institute.

“Switching to the rouble will increase exchange rate risks and is sure to complicate many contracts, and in any case there will be reservations relating to the exchange rate, or the rate for, let us say, a barrel of oil in dollars,” says Kuptsikevich.

Do not forget that Russia itself also needs dollars. “We pay for our imported goods with them,” says Dvinyanin.

Then again, exporters also need dollars. “Generally speaking, it does not matter in what currency a payment for the goods is made – in roubles or dollars. Exporters will put their money into the currency that is most convenient for them. Our largest exporters [including Gazprom and Rosneft] have debts fixed in foreign currency, so they will still have to leave part of their export earnings in dollars,” says Khromov.

Text compiled based on material published by RBC-Daily and Vzglyad.