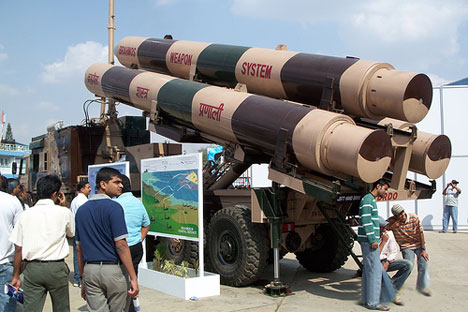 Around 14 countries have shown a degree of interest in purchasing the Indo-Russian missiles. Source: flickr/srk_gan

The Indian Army conducted the successful test at the Pokhran range in the state of Rajasthan, according to a report in the local media.

The Indian Army successfully test fired an advanced version of the BrahMos 290 km range supersonic cruise missile on Monday in Rajasthan, PTI reported.  According to the report, the missile was launched by a mobile autonomous launcher deployed in full configuration with mobile command post at the ranges.

“The launch was successful and the missile hit the designated target,” the news agency cited Defence Spokesperson Col S.D. Goswami as saying.

The Russo-Indian joint-venture enterprise BrahMos was established in 1998 and got its name in honour of the rivers Brahmaputra and Moskva. The missile has a flight range of up to 290 kilometres and is capable of carrying a conventional warhead of 300 kilograms. The missile can cruise at a maximum speed of 2.8 Mach.

BrahMos cruise missiles have been adopted by India's Army and the Navy’s surface ships. Work is also underway to adapt the missile to Su-30MKI planes used by the Indian Air Force. A scaled-down version of the supersonic cruise missile may be phased into service in 2017, Dr. Sivathanu Pillai, CEO and MD of the BrahMos Aerospace Company had said in September 2013. “In order to install a BrahMos rocket on board a fighter plane, it is essential to reduce the rocket's weight. A reduced version got the name of BrahMos-M (mini). After work on a detail design and an initial configuration of the rocket is completed, the development of the rocket proper will ensue, he pointed out.”

Around 14 countries have shown a degree of interest in purchasing the Indo-Russian missiles.