How will global warming impact Russia? 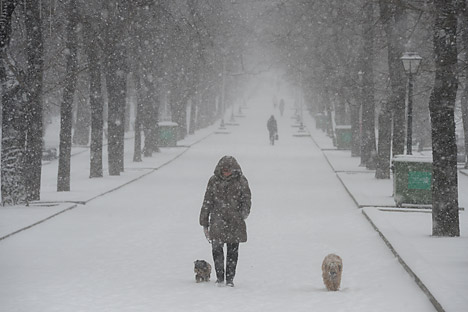 With dramatic changes predicted as a result of rising temperatures, what awaits the country’s geography and economy?

The series of unusual climatic events that has affected Russia over the past few years has continued into the beginning of 2014.

In January, tulips sprouted in St. Petersburg and snowdrops appeared in the forests around Moscow. In February, bears awoke early from their hibernation in the Far East.

Eight temperature records were broken in March in the capital: On March 25, the temperature rose to 66.7 degrees Fahrenheit. At the time of writing, it is below zero again and snow is on the ground.

According to Alexei Kokorin, the director of WWF Russia’s Climate and Energy program, these phenomena are not out of the climatic norm, but as the temperature rises with each passing year, Russia and the world await much greater changes.

Meanwhile, in the case of Russia, it is only possible to predict the fact of change, and it is unrealistic to calculate the costs for the economy.

The climate is changing everywhere

The second half of the fifth paper of the Intergovernmental Panel on Climate Change, presented in Japan in late March, predicts many problems for our planet if the world’s oceans and atmosphere continue to heat up at such a rate.

Scientists are in no doubt that the average temperature is rising. The only doubt is to what role humans play in the process and how exactly the future changes will occur.

According to the IPCC calculations, our planet faces catastrophe if the temperature rises 2.5 percent more than the average for the last 35 years, but such a scenario is unlikely – although the warming is happening very unevenly.

The temperature in Russia is rising more quickly. According to data published by Roshydromet (the Russian Federal Service for Hydrometeorology and Environmental Monitoring), it has risen about 1.5 degrees since 1975, while the global temperature has risen 0.8 degrees.

The fundamental three problems that the temperature change will bring about are the deficit of fresh water, the rising of sea levels, and the rapid increase in the proportion of carbon dioxide in the atmosphere.

All of the remaining problems which could affect us in the future - the melting of glaciers, flooding, migration, resource wars, and the aggressive spread of tropical diseases - are just potential consequences of the three major ones listed above.

How will this affect Russia?

According to Alexei Kokorin, not one scholar today can give even an approximate estimate of the percentage of GDP losses that will be incurred in the near future due to climate change for such countries like Russia, the U.S., or China.

“Russia is situated in such a way that its [climate change] factor is not easily calculable,” says Kokorin.

The expert says it is relatively easier to calculate the blow to the economy of countries where there are long-term phenomena such as glaciers, rising sea levels, or permafrost shrinkage.

“If it is a coral atoll in the Pacific Ocean, it will simply disappear. People have to escape somewhere, for example, to Australia. It is likewise easy to calculate the consequences for the Mekong or Ganges Delta.”

“Or a resort in Switzerland: It was there, but now it’s not. One can host an Olympics on artificial snow, if lucky, but not a year-round resort.”

Rising sea levels do not carry an explicit threat to Russia anywhere, except perhaps in the Baltic. Permafrost is a much more relevant issue for Russia.

Despite the fact that it covers 60 percent of the territory of the country (nearly 3,861,000 square miles), the economy hardly depends on it at all.

Thus, Kokorin says, it is only possible to calculate the economic consequences in Russia by using a detailed map where every 3.861 square miles is considered separately.

It is very difficult to calculate this entire patchwork quilt. To do so one must literally research every scrap of territory in order to understand from what and how the climate will change. Here we [WWF] have made a detailed plan for Vaygach Island [located in the Arctic between the Pechora Sea and the Kara Sea], but it is a very small territory.”

According to Kokorin, such a calculation will be carried out in 10-15 years.

In the meantime, an accurate assessment will be done of the consequences of dangerous climatic events, the number of which has doubled in 15 years, from 200 per year to 400-450.

What can be counted?

In the summer of 2010, powerful anticyclones hung over the European part of Russia for several months, bringing drought, forest fires and crop failures.

In August 2010, Russia banned the export of grain, restoring it only after July 1, 2011; millions of dollars were lost.

In the same year, in December, hail struck Moscow. This phenomenon occurs in winter under certain air temperature conditions: Precipitation falls in the form of rain but turns into ice upon contact with cold surfaces.

In the summer and autumn of 2013, Russia’s Far East was under water. The strongest flood recorded in 155 years inundated more than 230 cities and villages. More than 100,000 people suffered damage to their property and livelihoods as a result.

Toward the end of autumn, the damages were estimated at more than $1 billion.