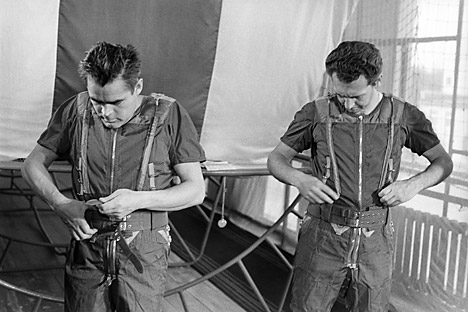 The testing was carried out carefully so that the first people in space could be sure that the body would be capable of withstanding the stresses. Source: ITAR-TASS

Although history only remembers the cosmonauts, space travel was made possible just because of researchers who first tested Soviet space technology.

The history of “extraterrestrial" testers began in the years 1952-53 with a government decree signed by Stalin and the order of Air Force Command to establish a group of military testers at the facility of the Scientific Research Institute of Aviation Medicine (NIIAM). Military doctor E. Karpov was appointed the first head of the testing department (later he became the first chief of the Cosmonaut Training Center).

The researchers from this secret institute located near the Dinamo metro station eventually became academics, and Keldysh, Korolev, Sedov and other leaders of the new breakthrough in the unknown listened to the experimentalists who had tested themselves against the demands of the future.

The testing was carried out carefully so that the first people in space could be sure that the body would be capable of withstanding the stresses. For this reason the selection of testers was no less stringent than that later conducted for cosmonauts: Of the 5,000 surveyed military personnel, only about 25 people were found suitable. In total, over the three decades between the 1950s and the 1970s, according to tester Boris Bychkovsky, the total number of research staff was approximately 900. There were also a number of freelance testers – volunteers, doctors, engineers, and aircraft mechanics.

Flying in space, while staying on the ground

“I was testing the equipment in pressure chambers, in particular the VKK -5 and VKK-6 full pressure suits,” recalls Bychkovsky. “They were testing for endurance in case of impacts in emergency situations (using different gases and vapors). I conducted more than 80 experiments in total.”

Nikolai Burkun, another one of the testers, was assigned to different research. “My specialty was high-altitude experiments and survival – in a thermal vacuum chamber and under natural conditions: the sea, the desert – Central Asia, the frozen taiga, the Arctic – the Tiksi area,” says Burkun. “The tasks were different: for example, to be among the men who know how to run fast in the desert. The soldier’s kit consisted of clothing, food, and water. How long will it all last and how can you make it last?”

After such attacks on their health, many people were given an early discharge or were taken to hospital. “We had two such people,” says Burkun. “That was when a sharp increase in pressure was simulated, like a rapid rise to a height of 14 kilometres – in a mask, but in tunics. However, on admission to NIIAM we only got a ‘Valid without limitations’ stamp.”

Fyodor Shkirenko was working during the years 1959-1961, at the time of preparations for “Flight 1”. The majority of the tests were high–altitude survival tasks and psychological experiments. “We stayed in pairs during the compatibility tests; I stayed in an isolation chamber with a friend for a month, and then five of us were placed in a dark chamber. After a certain period of time, doctors asked each one of us what time it was. There was not a single lamp – just like in space. In this environment, we were rescued by communication… As for our guessing of time, it could differ up to few hours,” says Shkirenko.

Ukrainians, Balts, Jews, Russians, Kazakhs – were all in the same team. Some of them went through a dozen experiments; others went through hundreds.

Two ordinary Russians prepare for a one-way trip to Mars

They breathed different gas mixtures, suffering heat and reduced pressure, as well as overloads, catapulting and different psychological effects on the centrifuges. Appliances and space suits were tested - Major Khlopkov conducted more than 400 experiments. Major Gridunov would take on excessive loads and kept asking: “What about the Americans? How many do they have? Let's give them more!”

Gagarin and Titov - in fact all the cosmonauts in the first team - were very grateful to these educators, researchers, and ‘pre-cosmonauts,’ they came to speak at the Institute at the Dinamo metro station, where they trained, tutored and prepared the “brave young men” as Sergei Pavlovich Korolev called the space explorers.

This is an abridged version of an article, first published in Russian by Vechernyaya Moskva.