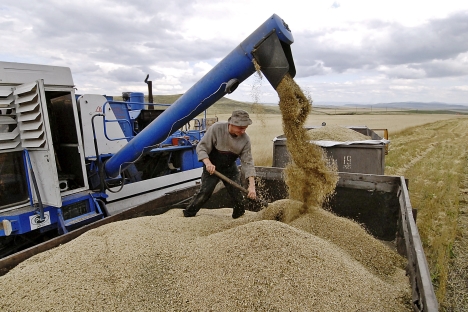 The greatest success has been achieved in the grain sector, where Russia has been a stable exporter for almost 10 years. Source: Itar-Tass

The changes in Asian consumption patterns are modifying the food market. As for Russia, food needs are rapidly being met domestically.

This year promises to be quite challenging for the food market, Natalia Samoilova, head of the analytical department of Golden Hills- Kapital AM predicts. “Developing countries are in a rather difficult situation of under- investment. Developed countries will try to expand their markets, using political measures too, after they come back to their growth rates” Samoilova told RIR.

Asian countries remain the main driving force for the world food market and are changing the consumption patterns, Alina Savelieva, Associate Dean for International Relations of World economy and international politics adds. “Asians started consuming more protein foods and the demand shifted, mostly, towards the meat sector. And this is great, because Russia looking to conquer these positions, began increasing the production of poultry and pork and seeking access to foreign markets.”

Indeed, Russia has been actively developing its own food production. The greatest success has been achieved in the grain sector, where Russia has been a stable exporter for almost 10 years. For example, just during this crop year, Moscow has sold more than 20 million tonnes in foreign markets – that is 44 percent more than in 2013, according to the Ministry of Agriculture, which is referring to data from the customs control. By the end of the agricultural year export figures could reach 22 million. Out of the total export numbers wheat comprised of 15 million tonnes, corn- 3 million tonnes and barley- 2 million tonnes.

In 1990, the food situation in Russia was close to becoming a total catastrophe. A socialist experiment made the largest agrarian empire in Europe into one of the largest importers of food.

Russia is now in a very good position, says executive director of Esper Group Daria Yadernaya. The country almost completely meets domestic demand for poultry meat, about 75 percent of the demand for pork and about 50 percent of the beef market. But the northern climate does not allow for the growing of tropical fruits. Some of the warmest regions of Russia (Olympic Sochi and since not very long ago Crimea) are subtropical. And the old production and storage technologies do not provide sufficient harvest even of traditional fruits for Russia like apples. Russia also imports vegetables, although in smaller quantities.

Experts believe that with the growth of domestic production, Russia can offer Asia a mutually beneficial cooperation. For Moscow this may be particularly interesting especially after a serious cooling of relations with the U.S. and Europe. Vasiliy Yakimkin of FIBO Group agrees: “In Asia, Russia can get additional orders for the supply of cereal with a good level of gluten (for baking bread),” he told RIR. Moreover, Russia can fill some niches on account of Ukrainian losses. “Due to a scandal with China and the subsequent litigation and costs, Ukraine ceases being a reliable partner,” he stressed. In addition, Ukraine is also rampant with African swine fever, which can be transmitted through the various grain cultures. In Russia this disease also exists, but the regionalization will eliminate export shipments from the affected areas.

However, in some sectors of the food market some reduction in trade is predicted between Russia and Asia. As paradoxical as it will sound, it will primarily be regarding the fish industry. As the executive director of Russia's Fish Union Sergey Gudkov told RIR, Russia is planning on moving away from the current model of the fishing industry to the production of products with a higher added value. A new processing industry is underway. Besides this, following the example of many countries around the world, Russia is planning to build a fish label under which only quality fish products would be sold from different Russian manufacturers. Right now this project is just being developed, but as soon as this year experts expect administrative decisions to be made. “Right now there is nothing except for political statements - no projects and adopted regulations,” Gudkov added.

The main market for Russian fish is Asia, especially China. “We sell China our pollock and cod, and they process it. At the same time they are able to maintain a fairly high standard of quality for delivery to the European market, and the safety of products is guaranteed no matter what. So far we are not able to learn to process fish on a normal industrial scale, in order to deliver it to Europe, although it is logistically closer to us” according to Gudkov.

He estimates that system changes will begin in 2015. A change of the tax rate for the use of aquatic biological resources is being planned, for example.

Victor Neustroev, leading analyst of Wild Bear Capital is sure that Russia can strengthen its position in other segments of the Asian food market. An example is the Chinese corn market. During the recent years, China has refused corn from the US because of traces of the MIR162 additive in some batches of genetically modified corn. “For Russia, this is a great opportunity to take on a new market” Neustroev believes. Besides this, Russia may also increase the supply of chicken legs to China, said Vasily Yakimkin.

As for imports, experts here see bright prospects for the import of Indian buffalo on the Russian market. The only segment of meat production in Russia, which has still not been able to get out of the 1990 crisis, is the beef market. Besides this, the domestic production of pork, although it continues to grow, simply cannot cover the 100 percent domestic demand. According to the Executive Director of the Russian National Union of Pork Producers Yuri Kovalev, only in about 3-5 years, will the domestic production of pork will reach 85- 90 percent of domestic consumption and then the growth will stop.