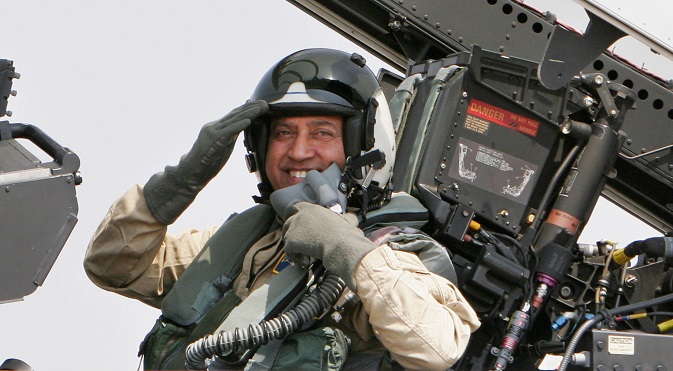 Rakesh Sharma: "India and Russia today have strengths that are complementary for the future of space research." Source: AP

India’s first cosmonaut talks to RIR about Indo-Russian space projects, why countries should avoid a space race and gives advice for future cosmonauts.

Could you recall please the moment you were chosen to become the first Indian cosmonaut? It was a huge responsibility, wasn`t it?

Well, that was so long ago. Both Ravish Malhotra and myself were called to the office of the Commandant, Aircraft and Systems’ Testing Establishment (ASTE) a premier testing unit of the Indian Air Force where both of us were serving as Air Force Test Pilots. The Commandant informed us that both of us were selected to undergo training at Star City, Moscow for the impending Indo-Soviet Space Flight scheduled to launch in 1984. Yes, on the one hand I was hugely excited while on the other, I was aware that a great responsibility was being thrust upon me as I would be representing my country, my Air Force and my unit – ASTE, in that order.

You often call upon world leaders in your interviews to work together in the area of space and try to avoid a space race. Why?

It is my belief that humanity has been unable to break out of the cycle of violence for centuries because we cling to our identities; that of, colour, nationality, language and culture. We need to find another model that will enable us to participate in inclusive, rather than exclusive growth. Space provides us a great opportunity to collaborate and co-operate with other nations provided that the agenda is to explore space for peaceful purposes and for the greater good of humanity. If we are to undertake the horrendously expensive experiment to establish a permanent human outpost on the Moon, Mars and other destinations in our solar system, it makes sense to collaborate, so that we utilize the limited resources of planet Earth in a more efficient manner. If we pursue, individual national objectives during the coming years of space exploration, we shall only be succeeding in exporting human conflict from Earth to outer space. We will then have to protect the assets like minerals, energy raw materials like Helium and other attractive substances for use of only people from the particular country that has invested in such an exploration. So, new national boundaries will have to be drawn to protect the territory of one or the other country, in outer space. If this happens, we will have succeeded in sowing seeds of conflict in those territories and therefore, be unable to break out of the cycle of violence that we have been trapped in. In my opinion, conflict and violence stems from exclusive growth that resulting in an inequitable distribution of wealth.

Which Indo-Russian projects in the area of space you see the most promising today?

India and Russia today have strengths that are complementary for the future of space research. Russia is a leader in reliable human access to space and has tremendous experience in supporting space crews for long durations in space. India on the other hand has a lot of experience in space applications and software programmes. As such, both countries can be productive partners in international space exploration missions in the future.

Which are the areas our countries should add to the bilateral portfolio?

If you put your name in Google search one of the most popular request would be – “Rakesh Sharma astronaut landed on moon”. Is it a hidden part of your biography?

Sadly, this misinformation made its way into school text books and was distributed far and wide. The Moon is a significant part of our cultural folklore and the young reader tends to see the Moon as a logical destination. Near Earth Orbit is a term that people are not familiar with!

You have been to the USSR… if you have a chance to bring some something from there what would it be?

Bringing back something: Zapekanka (cottage cheese cake) and Black Caviar.

Some other thing that cannot be touched: Alla Pugachova’s and the music of other pop artistes who were becoming popular in your country in the 80’s!

There are no immediate plans for the launch of an Indian cosmonaut by ISRO.

Well, it has been planned for a while but has got delayed for a while partly due to technology denial interventions by the international community.

Indian manned mission could become a reality during next two years, Indian Space Research Organization (ISRO) had promised before. How do you personally feel about this timeline? Does India really need to send its cosmonaut to the space by itself?

I feel it is an unrealistic timeline. Mastering cryo technology is only part of the story. There are other disciplines that need to be worked on that will be time consuming.

Till such time that we do not have a global vision for future space exploration, (as I have attempted to articulate above) I am afraid, every country will attempt to develop an individual capability to gain access to space and get busy in rediscovering the wheel at a great expense by consuming the meagre resources now left on planet Earth. This is the challenge before World Leaders today. The answer to your question can only come from a visionary, world leader with an all inclusive global outlook.

There are also plans for joint Indo-Russian manned missions into space. Should our countries come back to track for such huge projects in the area of space?

Yes. It would be a beginning and should aim to demonstrate to the international community, how we can collaborate to the mutual benefit of our two peoples. It follows that the collaborative activity must have definite aims that will demonstrate how future space exploration has the potential to positively impact the lives of people back on earth.

This year Russia is celebrating Gagarin`s 80th birth anniversary. What do you think was his biggest achievement and what is his legacy now?

In my book, Gagarin was a quintessential explorer. Like all explorers he believed in his team, and in himself. He was fearless and his legacy lives on. In fact he was the one who showed that an idea could become reality if we can leverage science and apply it intelligently.

How did you personally change after your space flight?

I have been fortunate that I have managed to continue a normal, professional and satisfying military test - flying career after the space flight, till retirement, while staying far away from public gaze. God has been kind!

Many boys dreams of becoming a cosmonaut. Do you think this is a right dream? Could you give them any advice how to become a cosmonaut?

If I could become an astronaut without ever dreaming to become one, imagine how easy it would be for someone who dreams of becoming one and then pursues that dream!

My only advise to them would be that a career in space technology is not a joy ride. Make sure that you are passionate about this interest, work hard to master the skills and knowledge required to excel in it and after all this, if an opportunity comes your way do not hesitate. Things never are as difficult as they appear from the outside.