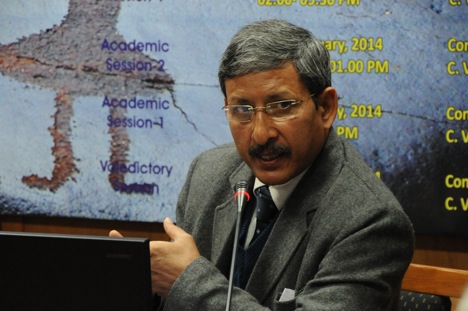 Chandra Mohan Nautiyal: "I feel that more people in India should know about the great Russian S&T institutions and vice-versa." Source: Alessandro Belli

Noted scientist Chandra Mohan Nautiyal shares his views on bilateral cooperation in science and technology between Russia and India and myths created by anti-nuclear activists.

In what specific areas under science and technology do you think India and Russia step up bilateral cooperation?

There has been fruitful collaboration in space and nuclear sciences. Joint ventures in exploring energy sources, scientific book publication and mineral exploration should also be mutually beneficial. Russia has been always strong in theoretical Physics and planetary sciences. I individually feel isotope studies and geochronology (dating) could be good areas for joint work. I feel that more people in India should know about the great Russian S&T institutions and vice-versa.

How do you feel about Indo-Russian cooperation in the field of peaceful nuclear energy?

There has been very productive and successful cooperation over decades and, most recently, reflected in the Kudankulam Nuclear Power Project.

You were a part of government campaign that aimed to explain the safety of nuclear energy to the people. What are the main reasons of people`s fear about nuclear energy?

NPCIL & Vigyan Prasar carried an effective campaign in 2012- 2013 on educating people about nuclear energy and I was involved too. Initially, even a matchstick and its box design were not safe. At one time, using a pressure cooker evoked fear of steam-burn and these cookers were dreaded. But not any more. The reason why people fear nuclear energy is that people tend to equate nuclear energy to nuclear bomb. This is clearly a misplaced notion. In addition, some mishaps such as involving an extremely rare coincidence of tsunami and earthquake hitting together a very old Japanese nuclear reactor of outdated design at Fukushima Daiichi added to the anxiety. But today, technology is too advanced. But yes, sincere care in operations is essential for safety.

Do you consider nuclear energy safe?

As I have understood, present day nuclear reactors are safe. In India, the locations are also chosen very carefully and there is no fear of tsunami and earthquake either. Even if they were to happen, the reactors are designed so as not to be affected. The concerned department has made these facts public also quite well. I visited the Narora plant some time ago. The rich bio-diversity including birds, aquatic life, insects and healthy eco system and lush green conditions around the reactor speak for themselves. As I learnt, water released in the canals is regularly monitored for elemental/isotopic as well as other chemical and physical differences from regular water. In fact, considering the absence of compounds of carbon, sulphur and heavy metal emissions and small amount of ash, make nuclear energy a far more environment-friendly source than coal. Besides, look at India’s clean record in nuclear reactors in contrast with the tragic loss of over a hundred thousand lives in road accidents every year! Don’t we all walk and drive regularly without fear?

Anti-nuclear activists keep telling stories about how nuclear energy can damage lives. Did your team check such stories? Are they right?

I don’t know all the stories but some were plain cock and bull stories. Things have been taken to ridiculous extents by some activists and are based on ignorance and some deliberate misinformation. Attributing the dolphins’ blinding in Bihar due to effluent release from Narora plant is nothing short of a joke. Actually, the South Asian dolphins have been always known as blind dolphins. Not having crystalline eye lenses, they are near blind and use echo to navigate. Some may be genuine concerns but can and should be addressed logically and that is where science communicators can play an effective role.

You are now involved in research. In the Soviet times India got a lot of science books from USSR. Were they good?

They were outstanding. And this is not my opinion alone. As a young boy, I spent most of my pocket money on buying books. The books by Mir & Progress publishers were among the most interesting and clearly written books I have read, and the get-up was very attractive. They were affordable too. I can remember their names: Entertainment with Physics, The Universe, Handbooks (of Physics and of Mathematics), Radar Made Easy, Key problems of Physics & Astrophysics, Atom A to Z and so on. I lost some to borrowers which remains my regret but still, I have at least 2 dozen of them left and still find them useful and enjoy. I really wish that they are republished. Some are basic and wouldn’t even require any or major updating though 4 decades have passed! May be some publishers in the 2 countries should take it up. The children today will be ever thankful for this.

This year you have been to Russia for the first time. Did this trip meet your expectations?

Expectedly the place is beautiful and cold and the people beautiful and warm! Moscow by evening is heavenly, especially by the riverside. My impression of Russian places and people was based on the rich literature such as works by Tolstoy, Gorky, Pushkin, Dostoevsky, and Turgenev and so on that had rural backdrop. But Moscow is different and has also now further evolved but remains as charming. The Tretyakov Art gallery houses a wonderful collection of paintings and sculpture.  Kremlin is captivating. I happened to visit Russia during period when traditionally vegetarian food is in plenty, so food was not that serious a problem either. Obviously a short period of part of 3 days or so is hardly likely to help fully appreciate the tremendously rich society and place. But whatever I saw, fascinated me.

You are also a specialist on science communication. What is this?

For a quarter century, using a variety of media, I have also been involved, as a hobby, in explaining science to people across a wide spectrum in a manner they’d understand and organizing such programmes. The style, topics, media and languages change depending upon audience. The media include print (articles, poems, activity guides), radio (talks, serial, drama, songs),  television (live and recorded commentaries, talks, quiz, interviews, anchoring), direct interaction (lectures, motivating interactions) and so on. I have also delivered over 100 lectures on the art of communicating science. This is not to be confused with communication science (electronics). The idea is two-fold: To help them understand science and its role in our lives. In addition, the temper should be scientific which can help in solving so many of social problems. I find it very refreshing to interact with the young who are full of curiosity. As I argued in one of my papers related to science communication, curiosity leads to scientific temper and helps to eradicate superstitions by making people logical in thinking.

Exposure to science in early years is likely to create interest for science in the young minds. This enhances the chances of good students taking to science as a career. One of the common concerns among the scientists today is that science is not a priority as a career among students. The students prefer management or finance or sales. The point is what will they manage, sell or earn if there are no products which can only come from science and technology?

Why do other people need it if they are not involved in science?

Those who don’t want to have anything to do with science, shouldn’t use science! Joke apart, in serious vein, living a safe, healthy and efficient daily life calls for certain basic knowledge of science and technology such as understanding grounding of electrical instruments, efficient use of energy or value of nutrients. Science communication will provide early exposure to science even to the rural folk. Consequently, some of them, when grown up, will tackle the problems of rural areas applying science and technology. Equally importantly, if not more, decision-making being involved at every step in life, the   scientific way of thinking prepares us for this. Explaining is the best way of convincing and despite being creatures of sentiments, we humans are amenable to reason and logic. So science communication is essential for everyone in the society not just for the information and knowledge but also because it governs the attitude. If it were so, people would first understand and then decide whether to oppose nuclear energy rather than being carried away with propaganda, sometime too far-fetched.