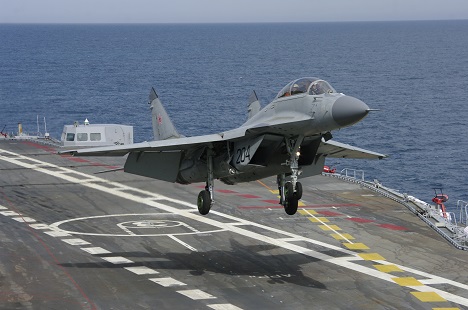 The first landing of the MiG-29KUB fighter, steered by an Indian pilot, on the Vikramaditya aircraft carrier’s deck took place on February 7, 2014. Source: MiG Corporation

Indian pilots are being trained to fly the MiG-29K/KUB deck-based fighters, which are stationed on the INS Vikramaditya.

Under a contract worth $964 million that had been signed in 2009, the Russian corporation agreed to modernise six fighters at its production sites and provide kits for the modernisation of other Indian MiG-29 planes by the local aircraft industry enterprises.

“In 2012 and 2013 we had delivered three planes each. We also delivered the technological kits that are needed for the assembly, repair and modernisation of planes of the Indian Air Force. So, we have fully met all our obligations,” Korotkov said.

He added that the first six planes “are already at a good stage of repair and modernisation” at Indian facilities. “These works continue. A large group of the MiG corporation experts are there. They, along with our subcontractors that participate in the project, transfer these aircraft and train the Indian colleagues to assemble planes.”

According to Korotkov, the training of Indian pilots for the MiG-29K/KUB deck-based fighters continues. The second batch of five Indian pilots started their training at the Goa naval aviation test range. “After getting the capacity certificate they will have the right to fly planes, taking off and landing on the Vikramaditya aircraft carrier,” Korotkov said.

Korotokov added that the training of the previous group of five pilots was carried out in two stages. The first was held on a Russian training set and the second - at a recently built in India training range. The first landing of the MiG-29KUB fighter, steered by an Indian pilot, on the Vikramaditya aircraft carrier’s deck took place on February 7, 2014.

The MiG Aircraft Corporation director general also told reporters about the corporation’s participation in the construction of the Indian naval aviation pilot training centre. “We designed mechanisms for this complex and we also installed them,” Korotkov said. “We’ve managed to implement such a big programme in a short time period.