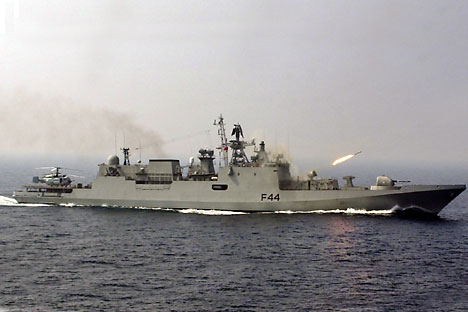 While taking part in the Indra-2014 joint naval exercises, the Indian Navy has its eye on the Northern Sea Route.

As its relations with Western Europe and the United States deteriorate, Moscow continues to increase its military and economic cooperation with its southern partners. Last Friday in Vladivostok, the final conference on the joint Russian-Indian naval counterterrorism exercise Indra-2014 was held. The manoeuvres will be held in the Sea of ​​Japan in mid-July. Four ships of the Indian Navy will participate in them along with the Russian Pacific Fleet (PF) ships.

The details of the exercises have not been disclosed. However, according to military and diplomatic sources, they are associated not only with counterterrorism objectives, but also with the interests of joint economic projects in the region.

A joint maritime defence is supposed to be worked out, as well as the holding of firing as part of the manoeuvres. The relevance of such actions can be attributed to India’s participation in the Sakhalin-1 project for the development of oil and gas field (the share of the Indian state corporation ONGC is 20 percent), as well as the planned shipment of natural resources from the Arctic.

India and Russia are involved in a joint development of phosphate deposits on the Kola Peninsula and potassium-magnesium salts in the Perm region (a total investment of $2.5 billion). It is possible that in the near future, caravans of Indian ships and tankers with these and other natural resources will pass through the Northern Sea Route, La Perouse Strait and through the Sea of ​​Japan to the trading ports in the Indian Ocean, and such caravans should, of course, be protected against pirates and other intruders.

That is why, apparently, according to the head of the Russian delegation, 1st Rank Captain Sergey Sinko, “the Indian side attaches great importance to these exercises, which have a great potential.” He believes that all the issues brought up at the Indra-2014 conference are agreed upon and approved. This is not the first time that Indian Navy is participating in the exercises in the Far East in collaboration with the Russian Navy. Such joint manoeuvres were held in the Sea of ​​Japan on April 24-26, 2007. Then five Indian Navy ships under the command of Commander of the Eastern Fleet of the Indian Navy Rear Admiral Robert Dhowan arrived in Vladivostok. At the Indra-2007 conference, the PF was represented by two large anti-submarine ships, missile boats, diesel submarine, coastal minesweepers and auxiliary vessels under the command of Vice Admiral Sergei Avramenko.

“Tensions between Russia and the Western countries, caused by the events in Ukraine, forced Moscow to intensify the process of diversification of oil and gas ,” military expert, Lieutenant-General Yuri Netkachev said. “Now there is talk of a possible construction of a pipeline to India through China. Although, in my opinion, it is more profitable to carry oil tankers from Sakhalin, and from the Arctic, especially because our joint naval groups will be able to ensure the security of such transportation in the future. “India is our strategic partner and its military presence in the maritime economic zone in the Far East and the Arctic will strengthen security in these regions,” Netkachev added.

Professor of the Department of Oriental Studies at MGIMO Sergey Lunev also believes that India is pursuing its economic goals. This country “would like to take an active part in the development of polar riches,” Lunev said. The academician added that in December 2010, AFK Sistema and ONGC signed a framework cooperation agreement. India's participation is now being considered in the development of Trebs and Titov oil fields in the Nenets Autonomous District (their reserves are estimated at 78.9 million tonnes and 63.4 million tonnes respectively). Vladimir Putin could sign agreements on these fields when he eventually visits India for the 2014 Indo-Russian annual summit.