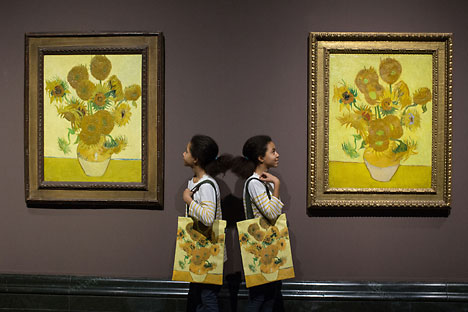 Prixel prints a relief in five to six layers to orders from internet stores; the original and the copy are indistinguishable to the eye. Source: Alamy / Legion Media

A Russian company has developed technology that allows copies of paintings that fully convey the texture of the artist’s brushstrokes to be printed.

Prixel, a Russian startup has developed technology that makes it possible to print copies of paintings that fully convey the texture of the artist’s brushstrokes.

The replica costs no more than $200 and the new technology may be used in the museum business. Fuji has similar technology, but in this case the price of one painting can reach $33,000.

The significance of the novelty

Prixel uses conventional wide-format ultraviolet printers in its work, which makes it possible to seriously reduce costs. The Prixel program allows not only for the “reading” of brushstroke contours, but also of the paint’s colour and shine.

“A regular reproduction of a Van Gogh painting, of course, conveys the mood of the painting and a general impression of the artwork, but without reproducing the contours of the forms taken by the strokes of the artist’s brush, the uniqueness of his technique is lost,” says Lyubov Cherevan, the owner of Prixel.

According to her, the painter did not dilute his paints but squeezed them directly onto the canvas, so heavy, thick strokes remained on it. The new technology allows for the complete transfer of this texture.

At first the cost price of reproduction was too high; a small painting (8×10 inches) cost $5,000. At the time the technology was based on printing simultaneously on a 3D printer and a UV printer.

In half a year, Prixel succeeded in reducing the cost 500 times by not using a 3D printer and by improving its technology. Now the creation of a 16×20 inch picture costs just $40.

Prixel prints a relief in five to six layers to orders from internet stores; the original and the copy are indistinguishable to the eye. For connoisseurs the service can print a 3D copy with 20 layers and heightened detail at about four to five times the price. Prixel can even dispense with working with the source for interior replicas and “increase” the volume of its own algorithms.

The startup is now closing a deal on attracting a seed investment of $300,000 from a consortium of investors from the St. Petersburg community of seed angels and Russian startup accelerator iDealMachine.

Before this, Prixel was conducting negotiations with foreign investors from the U.S. and Singapore. However, both of the foreign funds insisted on the transfer of the project to their own country and the company preferred to stay in Russia.

Where can it be used?

Moreover, the process of preparing a copy is carried out with such attention to detail that no more than three reproductions can be printed a day using Fuji technology.

The Canon Océ Group has announced a similar development: It has developed a detailed 3D photographic scanning system.

Volunteers from abroad holding the fort of Hermitage Museum

At the moment Prixel is conducting negotiations with the State Hermitage in St. Petersburg about placing in the museum store copies of five models already created from paintings.

The founders of the service hope that they will be able to successfully negotiate with the museum’s administration on the digitization of the masterpieces in its collection as the Hermitage does not yet have 3D digital copies of them.

Prixel is also looking at Amazon as a potential partner. Approximately 300,000 reproductions are sold through the internet store – Van Gogh and Picasso being the most popular painters.

The paintings are presented in 2D on Amazon, whereas the technique of their art is, in the opinion of the company, ideal for reproduction with 3D technology.