Three strategies for the export of Russian arms 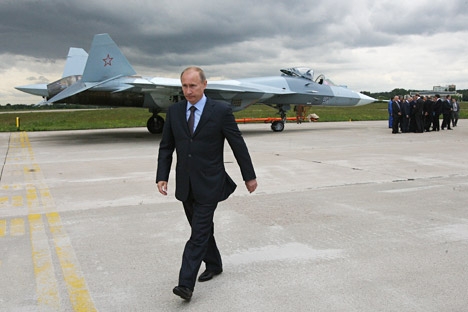 Regarding arms, Russia is cooperating with about 70 countries. Source: Itar-Tass

Moscow is moving on from the traditional buyer-seller relationship it enjoys with important partners like India, but may maintain older strategies with lesser developed countries.

Defence cooperation between Russia and foreign countries continues to grow, despite the forecasts of an impending global recession. Russia currently stands a firm second in arms supplies to the world market. These figures have been achieved through different strategies depending on cooperation partners.

First, the most time-consuming, but also the most politically significant and stable line of cooperation is aimed at the transfer of licenses and, in some cases, the joint development of military equipment.

Among the countries for which Russia uses or seeks to apply this strategy, India comes to mind.  Other countries include China, Brazil and South Korea.

Today, in full capacity, this strategy is carried out only in relation to India, for which Russia is a source of high technology.

The second area of ​​cooperation with India is the T-90 tanks. Currently, the Indian armed forces have about 800 T-90 tanks, of which more than half are assembled locally. Output is gradually growing – the production capacity of India’s state factory Heavy Vehicles Factory (HVF) has now reached up to 140 tanks per year.

Under the joint development of various weapons systems, BrahMos cruise missiles and the fifth-generation fighter (FGFA) have become the most notable contract agreements. In both cases, based on promising developments, the Russian P-800 Onyx missile and the T-50 fighter were prototypes; and the Onyx was already in trial operation by 1997, and the T-50 at the time of conclusion of the agreement on the development of FGFA existed only in the form of models and individual elements. The machine’s first flight was held in January 2010.

Currently, the parties are working together on a project for a multipurpose transport aircraft. Cooperation in the naval sector is actively developing.  In November 2013, the Vikramaditya aircraft carrier was transferred to the Indian Navy after a prolonged modernization. India is also renting a nuclear submarine under the Chakra project. An agreement in principle on the completion of another submarine for this project was reached at the end of October 2013.

China, which was actively producing weapons with Soviet licenses from 1950-1980s, returned to buying Russian technology to improve its defence industry. However, the licensed copies the Chinese purchased very quickly moved to independent production technology, developed on the samples they received. But in many cases the copying process was facilitated by using Russian and Ukrainian engineering departments. This is how the J- 11, J- 15 fighter, the Y- 20 transport aircraft, the HQ- 9 anti-aircraft missile system, and several other samples emerged. However, China's achievements in the field of copying another’s work have not been developed further. Therefore, we can predict a renewed Chinese interest in new Russian developments, as the Russian defence industry is producing weapon systems for the changing generation. The first signal of this kind was the interest China showed for the Su-35s, the most advanced version of the today’s T-10 (Su-27) platform.

South Korea, in turn, basically placed its bet on the joint development of an emerging technology involving Russian engineering departments. Through this partnership, the KM-SAM anti-missile system and the Naro-1 (KSLV) booster were created. In both cases, when the projects began in the beginning of the 2000s, working prototypes of these systems were not available. The Russian participant cooperatives Almaz-Antey, in the case of the KM-SAM and the M.V. Khrunichev NGO Naro-1 case, used data mining contracts for its advanced systems – the Vityaz anti-aircraft missile system and the Angara booster, respectively.

As for Brazil, Russia seeks to peak its interest in the possibility of joint development in the field of military aviation and air defence systems. If this can be achieved, we can speak of a formation of a certain circle of developed countries using Russian technologies in designing and manufacturing its own military equipment. Such developments will significantly increase the stability of the Russian defence industry in the most responsible and most high-tech sector.

The second strategy of military-technical cooperation focuses on countries that have relatively large financial resources and can afford to buy expensive military equipment. We are talking about Indonesia, Malaysia, Vietnam, Algeria, Iraq, Venezuela and Azerbaijan among other countries. Cooperation with them is characterized by a fairly large amount of contracts. They buy modern military equipment or simplified versions, providing no less an overall aggregate at smaller volumes than exports based on mega-contracts with India or China.

Prospects of military-technical cooperation in this area are often questioned because of the political risks. Therefore, the Arab Spring has led many experts to speak of the upcoming termination of cooperation with the countries of the Middle East, and the death of Hugo Chavez led to doubts on cooperation with Venezuela. However, these fears were exaggerated.

The most telling refutation of opinions about the futility of Russia's arms exports to the Middle East was a new contract for the supply of helicopters, air defence systems, and other weapons to Iraq in the amount of $4.2 billion, which was concluded in autumn 2012. Deliveries under this contract were launched in autumn 2013. At the same time, military cooperation with Libya was resumed. Deliveries of propelled anti-tank Chrysanthemum systems (according to some information, BMP-3 infantry fighting vehicles) ordered under Gaddafi were made to Libya.

At the turn of 2013-14, the first steps towards the resumption of military-technical cooperation with Egypt were also made, which could potentially become one of the largest buyers of Russian weapons in the next 5 years. The first transaction, according to the Egyptian side, will be for at least $2 billion dollars. Egypt plans to get air defences, MiG-29 fighters, and helicopter gunships.

The third strategy of military-technical cooperation between Russia and foreign countries is with regard to the Developing World. This mainly focuses on some states of Africa, Latin America, and Southeast Asia. Contracts with these countries are usually ad hoc and are made in relatively small amounts, ranging from a few million to several hundred million dollars.

However, large revenue can be found here as well. For example, in October 2013, a contract was signed with Angola for arms deliveries worth a total of $1 billion, which included Soviet armament production parts, small arms, ammunition, tanks, artillery installation and Mi-17 multipurpose helicopters. In addition, the parties agreed to build a plant in Angola for the production of ammunition. Also included in the agreement was the delivery of 18 refurbished and armed Su-30K fighters, formerly used by the Indian Air Force.

This contract fairly accurately reflects the composition of the bulk of agreements concluded with developing countries, including the least developed Russian CSTO-type partners Kyrgyzstan and Tajikistan. These contracts regard spare parts, small arms, ammunition, armoured vehicles (usually repaired and pre-owned by the Russian Armed Forces), and used aircraft. The exceptions are mainly new helicopters and cars.

Regarding cooperation with Angola, it should be noted that further economic growth and an increase in military spending can move this country into the “second strategy” category, if it decides to develop relations with Russia in this field. In the meantime, the number of “third strategy” countries," is the highest: according to experts, they make up two-thirds of the more than 70 countries in cooperation with Rosoboronexport. However, the annual income of this group is relatively small and it is estimated to be no more than 10-15 percent of the total supply.

First published in Russian by RSMD.