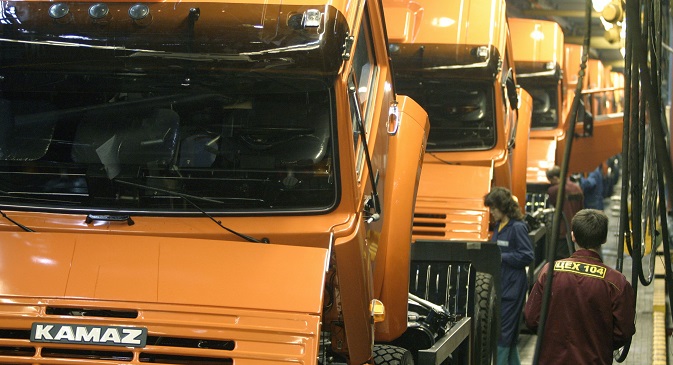 India could become a base for the expansion of Russian trucks in Asia. Source: Photoshot / Vostock-Photo

After buying out its Indian partner in a joint venture, the Russian truck maker plans to use its Hosur factory as a base for expansion across the continent.

At the end of last month, Kamaz said it bought out its Indian partner, the Vectra Group, with whom it created a joint venture in February 2010. The Russian company bought out the share from its Indian partners in December 2013 and received full control over the plant with a design capacity of 5,000 trucks per year.

Kamaz spokesman Oleg Afanasiev refused to disclose the reasons for the buyout, but Narek Avakian, an analyst with AForex suggested that the reason was disputes with the Vectra Group about the results of implemented projects and the jv’s slow assimilation of the Indian market. “That being said, the reasons for Kamaz's difficulties in the Indian market could be more objective, such as: the reduction of business and manufacturing activity in India, the high level of competition from other manufacturers (primarily China, Europe, and Japan), and the lack of an adequate level of logistics,” Avakian said.

Prior to the acquisition of the shares, the group's share of Kamaz Vectra Motors Limited's net loss was a little over $5 million.

Afanasiev says Kamaz's stake in the Indian market is less than 1 percent. “Since we have been preparing production for a long time, we have sorted out the joint stock affairs,” he explained. He refused to articulate the company's plans to expand its market share, explaining that they did not wish to disclose this information to their competitors. He would only say that the buyout of Vectra addresses the question of expanding the range of supplied products in the Indian market.

In a recent interview with Vedomosti, Kamaz's Chief Executive Sergey Kogoghin talked about the auto giant's Indian experiment.  “The vehicle, which is produced there, has 80 percent localization. There had been a joint venture there, but now it is completely our asset. Having localized the vehicle there, we immediately got the opportunity to work with partners in supplying automotive parts to Russia,” he said.  "We have identified three strategic markets: India, the countries of Latin America and China. We started with India. We are learning how to operate correctly and are testing our abilities.”

Avakian believes that the Indian market could become the second largest in Asia in the next 3-5 years. India is currently third, as the number two spot is held by Japan. “I estimate the global market for heavy-duty trucks to be worth about $120 billion of which Kamaz's share could reach around 5-7 percent, and, therefore, the Russian manufacturer's revenue could exceed $12 billion in the next 3-4 years,” he said.

Kamaz's Indian plant is preparing several models of open-ended vehicles and construction trucks using the KamAZ-6540 chassis, as well as long-haul tractors. However, according to Afanasiev, mainly dump trucks are sold in India.

“The production has a fairly high level of localization,” Afanasiev said. Only the frame, cabin, and bridge comes from Russia. Everything else, including the engine, is made on site or purchased from Indian suppliers. Kamaz highly appraises the prospects of the Asian market and plans to make India its base for business expansion across Asia.

The growing Asian market is indispensable to Kamaz, least of all because the Russian domestic market has not fared much better. Certain difficulties have arisen due to the exacerbation of the political conflict in Ukraine, as well. In mid-March, unidentified, armed men seized a batch of 50 trucks during an attempt to move them from a warehouse in Ukraine, where sales have fallen, on to Russia for continued shipping to the Kazakhstan market. Although the trucks were later returned, the Kamaz group sold its business for sales and service of their vehicles in Ukraine.

According to Afanasiev, India could become a base for the expansion of Russian trucks in Asia. While what is made at the Indian plant will be sold in India, the markets of third world countries have not been ruled out for the future. Russian experts believe that choosing India as a platform to launch the development of the Asian market is the strategically correct step.

By the end of this year, analysts see Kamaz's total sales amounting to 55,000-60,000 trucks, and by 2015 it is possible they could expand to 70,000, but this would require the state to stimulate the market's development in Russia. “In the future, the growth of Kamaz's production is only possible through the development of exports, and I think that the company is well aware of that,” Avakian commented.