Russia surges ahead in radio-electronic warfare 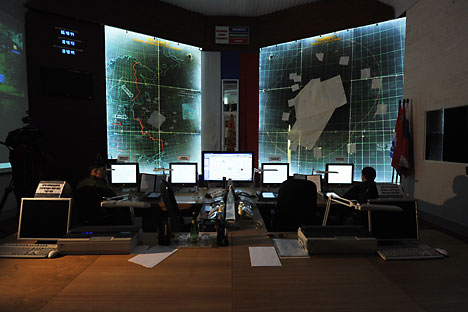 The crew of the Donald Cook American destroyer was demoralised by the encounter with the Russian bomber SU-24, which used radio-electronic weaponry. With several advanced systems, this is an area that Russia enjoys a distinct tactical edge.

On April 10, the Donald Cook, entered Black Sea waters and within 2 days, the Russian tactical bomber Su-24 “buzzed” the American destroyer. A few media outlets reported that Donald Cook’s crew was demoralised by this encounter and 27 American sailors resigned from the navy. What petrified the American crew so much?

Donald Cook is a 4th generation fleet destroyer of the US Navy. Its key weapon is the Tomahawk cruise missile with flying range up to 2500 km, which can carry nuclear explosives. In standard and striking set-ups the vessel carries 56 or 96 such missiles correspondingly.

The destroyer is equipped with the latest Aegis ballistic missile defence system military. Among other functions it can centralise the air defence forces of all the ships where it is installed in a common network, therefore allowing for tracking and shooting up hundreds of targets at the same time. Four huge standard radar aerials, which can substitute for a few ordinary radars, are located on the sides of the deck erection. About 50 intercept missiles of different classes are installed together with the Tomahawks in the universal launching installations on the bow and by the stern.

The Su-24 Russian tactical bomber which approached the Donald Cook carried no bombs or missiles but a container with the Khibiny radio-electronic military system. Having approached the destroyer, Khibiny was use to switch off the American destroyer’s radar, battle control circuits and data exchange systems. In other words, it turned off the whole Aegis by remote control. After this, the Su-24 simulated a missile attack at the “blind and deaf” ship, and repeated the manoeuvre 12 times.

When the Russian fighter left, the Donald Cook rushed to a Romanian port and never approached Russian waters again.

“To win a contemporary war, it is not enough to dominate in the air. It is necessary to secure an information advantage,” says Vladimir Balybin, Head of the research centre for radio-electronic battle and concealment efficiency. Apart from Khibiny, the Russian defence industry manufactures various types of equipment that could surprise active enemy units as well as criminals and terrorists.

Airborne forces are being re-equipped with Infauna complexes. These are installed on armoured vehicles or other military vehicles and can locate and jam enemy’s radio connection in short wave and ultra-short wave frequencies, and “put out” remotely-controlled land-bombs. They will explode but only after the Russian troops have passed by and are far enough to be safe.

Infauna has another function: the optic sensors installed on both sides of the vehicle spot flashes of discharges and command laying smokes-screen to protect convoys from fire.

The Lesochek device fulfils the same functions as Infauna but is portable and can fit into a backpack or a suitcase.  It can be useful at important talks for protection against most advanced security services interception systems.

The Borisoglebsk-2 is the core of the radio-electronic warfare of the tactical units of the Russian army. It comprises an automated command point and four types of jamming stations – they use a single algorithm to identify and jam the sources of hostile activity on the air.

The Zhitel device locates and blocks satellite and mobile phones, subscription complexes of GPS-navigation. It proved efficient during the conflict in South Ossetia by misleading Georgian drone aircraft.

This is an abridged version of an article first published in Russian by Rossiyskaya Gazeta.