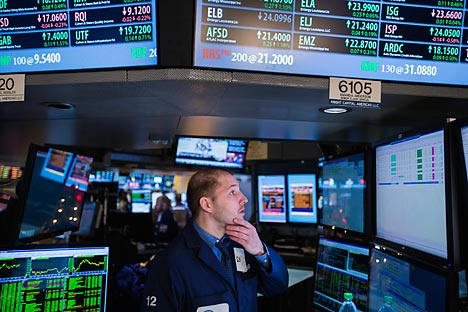 Yet if Russia’s integration in the Western business world has complicated any efforts to impose sanctions, it also makes Russia potentially more vulnerable. Source: Reuters

Sanctions imposed on Russia in the wake of the Ukraine crisis pose a great challenge to Moscow, since the Russian economy is far more integrated into the world economy today than its Soviet predecessor was.

The standoff over Ukraine has pushed tensions between Russia and the West to levels not seen since the Cold War.

Yet as the U.S. and Europe ponder a range of measures aimed at isolating Russia – in an echo of NATO’s Cold War strategy of containment against the Soviet Union – a key difference has muddled the strategy: today’s Russia is far more integrated into the world economy than its socialist predecessor was.

Russia, the EU’s third-largest trade partner, provides some 30 percent of the bloc’s natural gas. Russian companies have billions of dollars’ worth of shares trading on exchanges in London and New York, with large minority investors from the U.S. and Europe. American oil giant ExxonMobil has bet big on Russia, swapping assets and forming a strategic partnership with Russian oil champion Rosneft.

All of which adds up to a multi-billion dollar question for Western policymakers and Russian officials alike: How far could sanctions against Russia actually go?

“I don’t believe in a scenario of full political or economic isolation,” former Russian Finance Minister Alexei Kudrin said in a television interview on Russia’s REN-TV. “I don’t think it will go that far.”

Yet Western officials have warned that Russia may face broad-reaching sanctions in areas like energy, finance, arms and manufacturing, even as Russian leaders have sought to downplay the threat.

Russian Economy Minister Alexei Ulyukayev told Bloomberg Television in May that broad sanctions against entire economic sectors are “like a nuclear weapon – nobody uses it.”

Indeed, some Western policymakers have said that any moves against Russia must be carefully tailored. Assistant U.S. Secretary of State Victoria Nuland told the Foreign Affairs Committee of the U.S. House of Representatives that further sanctions would be targeted to limit damage to Western interests. “The idea here is to use a scalpel rather than a hammer,” Nuland said.

Russia’s most important role in the global economy is that of a colossal producer of oil and gas. Russia is the world’s number-one exporter of natural gas and the number-two exporter of oil, and foreign firms have pushed hard for access to these reserves.

Royal Dutch Shell owns a 27.5 percent stake in the Sakhalin-2 oil and gas field, where it has partnered up with Russian natural-gas exporter Gazprom.

U.K. energy firm BP owns an almost 20 percent stake in Rosneft, and signed an agreement with the Russian firm as recently as May 24 to explore for shale oil in Russia.

As tensions escalated in the Spring, Russian President Vladimir Putin said sanctions could prompt his administration to take a hard look at the role of Western companies in Russia.

“If something like this continues, then of course we will have to consider who’s working and how in the Russian Federation, in the key sectors of the Russian economy, including energy,” Putin said on April 29.

Yet if Russia’s integration in the Western business world has complicated any efforts to impose sanctions, it also makes Russia potentially more vulnerable. The result is that both sides have a great deal to lose.

Ex-finance minister Kudrin estimated that sanctions might reduce Russian GDP growth 1 percent to 1.5 percent this year. “That’s not a catastrophic loss, because Russia has been through even more difficult moments in the recent past,” Kudrin says.

“We as a country – and our leadership, I hope – feel where the line is, where there will be significant damage to the economy,” Kudrin says, adding that he hoped the line would not be crossed.

Soviet enterprises were by definition non-commercial and the Soviet economy was geared towards self-reliance.

In 1985, only 4 percent of the Soviet gross national product came from imports and exports. Much of the Soviet Union’s foreign trade was done with countries that were already part of the socialist sphere.

When the Soviet Union invaded Afghanistan in 1979, the then U.S. President Jimmy Carter declared America would boycott the 1980 Olympics in Moscow, and ordered a round of economic sanctions.

The result was the 1980 U.S. grain embargo of the Soviet Union, which had negligible impact on the Soviet economy and seemingly no effect on Soviet policies. Latin America and Europe stepped in to fill the supply gap, and the war in Afghanistan dragged on for a decade. A glut of grain in the U.S. caused domestic prices to drop, hurting U.S. farmers. President Carter’s successor, the vehemently anti-communist Ronald Reagan, lifted the embargo in 1981.

Writing about the embargo in a 1980 edition of Foreign Affairs, the political scientist Robert Paarlberg concluded:“The urge to teach someone a lesson seldom inspires sound policy.”

In May, Russia finally ended a decade of negotiations and agreed to provide China with $400 billion in natural gas over 30 years.

The deal gave Russia “breathing space,” Keun-Wook Paik, a senior research fellow at the Oxford Institute, told the Associated Press. “Russia – and Putin – can demonstrate it’s not completely isolated because of the Ukraine crisis. … Russia has demonstrated that [it has] a very reliable strategic partnership with China.”