Narendra Modi to sail on board INS Vikramaditya 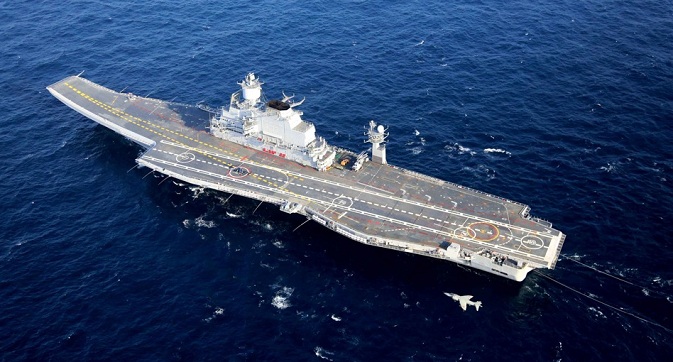 Important policy measures regarding defence procurements are likely to be announced by the Modi government in the next few weeks. Source: AP

The Indian Navy is expected to demonstrate the operational capabilities of the carrier, including take-offs and landings by the ship’s MiG 29 fighters.

Indian Prime Minister Narendra Modi will sail on board the Russian-built aircraft carrier, the INS Vikramaditya, on Saturday, June 14 sources from India’s Defence Ministry told RIR. He is likely to get on board off the coast of Goa and spend a couple of hours on the ship, while dedicating it to the nation.

This would be the new prime minister’s first visit to an Indian defence installation. The ship is literally an island with a crew of 1600. The Indian Navy is expected to demonstrate the operational capabilities of the carrier, including take-offs and landings by the ship’s MiG-29K fighters.

Important policy measures regarding defence procurements are likely to be announced by the Modi government in the next few weeks. A new defence minister will also be appointed soon. At the moment, Indian Finance Minister Arun Jaitely also has charge of the defence ministry. Sources from Delhi have indicated that India was considering allowing 100 percent foreign direct investment in the defence industry.

Russia handed over the INS Vikramaditya to India in November in a ceremony at Severodvinsk. The aircraft carrier left Russia in December and arrived in Karwar in January.

The former Admiral Gorshkov, is a Project 1143.4 or modified Kiev class aircraft carrier commissioned by the Soviet Navy in 1987 and decommissioned in 1996 after cuts to the Russian Navy fleet.

After a complete overhaul, the ship got a new flight deck and a ski-jump ramp for MiG-29K jet fighters, navigation, radar, communication and flight control systems, other equipment and units. Russia also trained an Indian crew of about 1,500 personnel and will build infrastructure for the aircraft carrier in the Indian Ocean. The ship is expected to operate for 25-30 years.