Tax amnesty on the cards for offshore companies 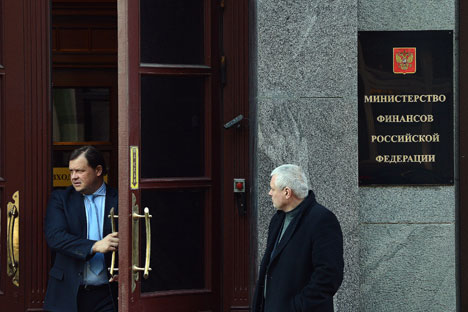 The 2-year moratorium will apply to businessmen who repatriate their assets. Source: AP

The authorities are looking to entice Russian-owned offshore firms to repatriate capital. A new law will impose penalties on such companies for tax evasion, but offers 2-year amnesty for those firms which decide to relocate to Russia.

The Finance Ministry has decided to grant a 2-year amnesty for offshore companies that have Russian owners if they move their assets to Russia. The draft law drawn up at the Finance Ministry forms part of a large-scale deoffshorization program.

Under the draft law developed by the Finance Ministry jointly with the Economic Development Ministry, penalties and fines for tax evasion will apply to Russian owners' offshore companies only starting from 2017.

FINAM investment holding company analyst Anton Soroko describes this proposal as balanced. First, offshore company owners have an incentive to transfer their assets to Russia before they become subject to tax, followed by penalties. Second, the budget stands to receive additional revenues, as it is unlikely that the majority of companies will manage to change jurisdiction before the end of the current year.

"The key objective of the efforts being undertaken by the government is to reduce the share of Russia's shadow economy and to bring back capital that was taken out of the country earlier," says Soroko.

The campaign against offshore companies began in Russia after President Vladimir Putin, in his annual address to the Federal Assembly (the Russian equivalent of the State of The Union address in the U.S.) in December 2013, urged businesses to return to Russian jurisdiction.

In March 2014, the Finance Ministry developed a draft law on controlled foreign companies. Under that bill, all individuals and legal entities controlling 10 percent or more in offshore companies were supposed to pay a 20-percent profit tax to the Russian budget. In addition, all owners of at least 1 percent in offshore companies' capital were expected to report their shareholdings with the tax authorities.

However, the draft law came under severe criticism from big businesses that use offshore companies, among other things, to raise foreign loans. As a result, the bill was revised: Now it covers only those who own a controlling stake in an offshore company, and envisages a temporary amnesty.

According to Mark Rovinsky, deputy head of the tax practice at the law firm Yegorov, Puginsky, Afanasyev and Partners, many Russian businesses make active use of offshore companies, including for taxation purposes. The main difficulty arises when the state cannot establish whom a company that is registered offshore and that controls a strategic asset belongs to.

For instance, in late June 2014, Russia's main railway operator, the Russian Railways company, held an open tender to select a contractor for upgrading several sections of the Baikal-Amur and the Trans-Siberian railways, which together run across the whole country, linking Europe to Asia.

The contract, worth 43.7 billion rubles ($1.3 billion), went to the Bamstroymekhanizatsiya company, which the day before the tender had sold 86.5 percent of its shares to a Cyprus offshore company, Sterema Limited, and the Heerden Holdings Ltd. company from the British Virgin Islands. The ownership of these offshore companies is unclear.

An even more striking example of the same problem dates back to early 2011. As part of investigating the suicide bombing at Moscow's Domodedovo Airport, in which 37 people were killed, the federal authorities were unable to establish the identity of the owner of the airport. It turned out that one of Russia's biggest airports was controlled by an offshore company, DME Airport Limited.

During questioning, Valery Kogan, who was believed to be a co-owner of the airport, refused even to give his name, citing Article 51 of the Russian Constitution guaranteeing the right against self-incrimination (similar to the Fifth Amendment to the U.S. Constitution).

Mark Rovinsky points out that the new Russian rules against offshore companies are largely based on international experience, including that of the U.S., the UK, Germany and other developed tax jurisdictions.

"The need to introduce these rules in the U.S. arose after the Second World War, when high tax rates inside the country provoked capital flight to other jurisdictions. In 1962, the notion of a controlled foreign corporation (CFC) was introduced, meaning any foreign company over 50 percent of whose capital was controlled by U.S. individuals or legal entities," Rovinsky explains.

In effect, the term used in Russia, controlled foreign companies, is a translation of the above notion, he adds. However, as a leading lawyer with the Pepelyayev Group, Pyotr Popov, points out, even in the U.S. and the UK these rules failed to resolve the problem of profits being channeled offshore.

"Overall, deoffshorization should bring certain benefits for the Russian budget but there should be some incentives in place, like the proposed amnesty on repatriated capital," Mark Rovinsky says.

Furthermore, he adds, repatriation of capital should not be all-encompassing. A case in point, says Pyotr Popov, was a rather tough deoffshorization bill in the U.S. developed with Barack Obama's participation. Under it, an American taxpayer was considered a controlling person of any offshore company with which he had any relations, for example, received loans from. However, the bill was rejected.