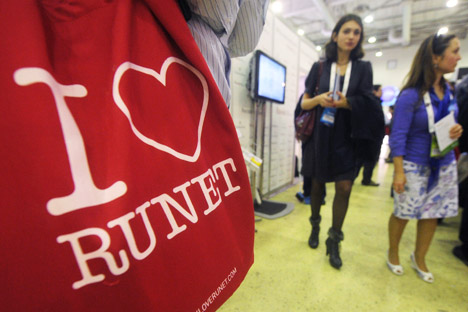 Today, the Runet is set to become one the key sectors in the Russian economy. Source: ITAR-TASS

The rising influence of the Internet in the country has led to more oversight by the Russian authorities.

In 2014, the Russian segment of the Internet, popularly known as the Runet, celebrated its 20th anniversary. The date April 7, 1994, when the Internet Corporation for Assigned Names and Numbers (ICANN) allocated the domain extension .ru to Russia, is considered the birthday of the Runet.

This milestone should have been an occasion to take stock of the accomplishments the Runet has made during its short life, such as the number of Russian Web companies that have been established, the number of Russian programs and programmers recognized internationally and the revenue generated by Russians doing business online.

But this spring, the only thing Russian Internet analysts were discussing was the state’s ongoing attempts to extend control over the Runet.

Sergei Plugotarenko, the director of the Russian Association of Electronic Communications, notes that this trend toward increased regulation began two years ago.

“The era in which the state began to show an interest in controlling individual segments of Runet and the network as a whole started in 2012,” he said.

Since September 2012, at least 10 laws have been passed affecting the operation of the Internet in Russia.

The first wave of bills were aimed at protecting children from harmful content on the net. Sites were required to clearly indicate the appropriate age level for their content using the same symbols as television programs and movies.

Additionally, a special department in the Ministry of Communications, called Roskomnadzor, was given the power to block sites that display information considered damaging to children. Such harmful material includes information about drug use, suicide and child pornography.

Then, in 2013, the state began a campaign to crackdown on pirated media online. The original bill drafted by the Ministry of Culture stated that users as well as owners of illegal content would be punishable by law.

After strong protests by the public, the law was softened slightly. However it still allows sites that distribute copyrighted material for free to be shut down without a court order.

It’s not only the content of these laws that the members of the Russian Internet community find questionable; they are also concerned about the way the laws were passed. With few exceptions, the legislation was drafted without consulting the community of digital experts.

This trend towards increased regulation has continued in 2014. Already this year a law has been passed that allows sites to be blocked for “inciting illegal actions,” as well as a law that requires blogs with more than 3,000 visitors per month to be registered with Roskomnadzor and to follow many of the same regulations required by mass media outlets. A third law bans anonymous electronic payments.

For the Runet, this situation is a new phenomenon. For the majority of its history, the Russian segment of the Internet was shaped by private business, and existed in almost complete isolation from the state.

Moreover, in comparison with traditional forms of media in Russia like newspapers and television, which are primarily state-controlled, the Internet has long been considered a place for a free discussion of ideas and for transparent business transactions.

Of course Russians did not begin to go online in 1994. The Soviet Union was given the domain extension .su in 1990. As in other countries at the time, the only people who used the Internet were staff at scientific institutions.

“The Internet only worked as a business for the communications companies,” said Nosik. “The reason for this was that whatever the cost of dial-up access to the Internet was, this price would nevertheless be paid. If users are paying this price it is in your interests to reach more users.”

The heads of many of Russia’s largest Internet companies cite the financial crisis of 1998 as one of the events that facilitated the spread of the Internet in Russia.

Search engine firm Yandex, founded in 1997; online media company RosBusinessConsulting, founded in 1995; and Runet’s first Internet shop Ozon.ru, established in 1998; exploded after the crisis due to the low costs of labor and the need for up-to-date information.

The Runet audience remained small through the early 2000s. The popular view is that this relatively low number of users helped the Internet avoid the gaze of the Russian authorities for so long.

By 2011, however, the Runet audience had reached 51 million users and the Internet was an integral part of the daily and professional lives of millions of Russians.

They learned how to purchase goods online, use Wikipedia and check email, mostly using the Russian email service Mail.ru. In 2013, Mail.ru group issued an I.P.O. on the London stock exchange. Under these circumstances, it was no longer possible for the Runet to remain under the radar.

In 2008, Dmitry Medvedev was elected president of Russia. He often underlined the need for modern and innovative technology for the country’s development. Medvedev set up an account on Twitter and made it known that the Internet was his main source of news.

Additionally, Internet firms began making big money. German Klimenko, general director and owner of the web firm Liveinternet said: “Money was invested into the Internet, and from a small community, as Yandex put it ‘everything blossomed’, and it became big business with everyone making their mark.”

Today, the Runet is set to become one the key sectors in the Russian economy. In a meeting with the leaders of Russian Internet companies in June, President Vladimir Putin announced that the annual turnover for the Internet market in Russia in 2013 had exceeded 1 billion rubles ($88 million) and had reached 1.7 percent of the country’s GDP.

“The indigenous Internet sector is growing across all key parameters,” said Sergei Plugotarenko. “The Runet is growing at several percent per year across all these parameters. Therefore in Russia the Internet is not simply a dynamically developing segment, it is overtaking almost all other forms of media, economics, and the environment.”

Plugotarenko noted, however, that growth has npw slowed to 20-30 percent per year, down from 30-50 percent three years ago. He thinks that this slowdown is not directly linked to increased state control, but rather that the sector has matured and the decrease is part of a natural economic cycle.

“Taking into consideration that laws are debated, passed and come into force every 6-12 months on average, if one was to ignore those quickfire initiatives, which were passed in a very short timeframe, it would be too early to talk about any significant impact the new laws have had on the Internet,” Plugotarenko said.

In his opinion, it will not be possible to assess how the latest legislative initiatives have impacted Runet before 2015.