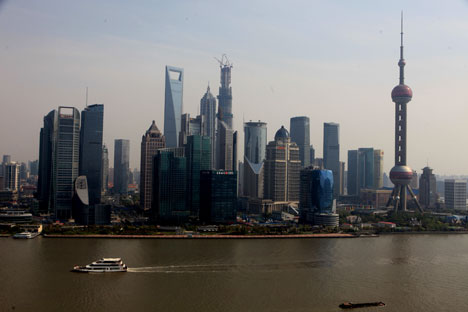 The grouping’s leaders will decide whether the bank’s headquarters will be in Shanghai or in New Delhi.

Leaders of the BRICS nations will launch their long-awaited development bank at a summit next week and decide whether the headquarters should be in Shanghai or New Delhi, Russian Finance Minister Anton Siluanov said Wednesday.

The creation by Brazil, Russia, India, China and South Africa of a $100 billion bank to finance infrastructure projects has been slow in coming, with disagreements over its funding, management and headquarters.

“The [headquarters] issue will be decided on the level of the heads of the countries,” Siluanov told journalists, adding that the choice is between China's Shanghai and India's New Delhi. BRICS leaders will meet July 15-16 in the Brazilian coastal city of Fortaleza.

The launch of the bank will be the group's first major achievement after struggling to take coordinated action following an exodus of capital from emerging markets last year, triggered by the scaling back of U.S. monetary stimulus.

The new bank will symbolize the growing influence of the BRICS, something that Russia has hoped for after the West imposed sanctions on Moscow in the spring.

Capitalization of the new bank has been a major sticking point, but Siluanov confirmed that the funding would be divided equally, with an initial total of $10 billion in cash over seven years and $40 billion in guarantees.

The bank was first proposed in 2012. The proposal was approved last year at a BRICS summit in South Africa but failed to be launched during the meeting in Russia last autumn of the Group of 20 developed and developing nations.

The bank will be open to other countries that are United Nations members, but the BRICS share is never to decline below 55 percent, Siluanov said.

The chairmanship, with a term of five years, will rotate among the members, but the first chairmanship is yet to be decided, Siluanov said.

The heads of the BRICS will also sign a blueprint agreement on the group's other project — a $100 billion fund to steady the currency markets, which has also been off to a slow start.

The initiative became more acutely needed after an inflow of cheap dollars fueled a boom in the BRICS for a decade and then reversed to a sharp outflow last year.

“We have reached an agreement that, in current conditions of capital volatility, it is important for our countries to have this buffer in addition to the International Monetary Fund,” Siluanov said.

But the framework agreement to be signed in Brazil will not include any direct commitments, which are due to come later when the central banks sign agreements.

A senior Brazilian official who participates in the negotiations said the pool could become operational as soon as in 2015.

According to the agreement, the cash will continue to be held in the reserves of each BRICS country, but it can be transferred if needed to another member to soften volatility in its foreign exchange market.

China, holder of the world's largest foreign exchange reserves, will contribute the bulk of the contingency currency pool, or $41 billion.

Brazil, India and Russia will chip in $18 billion each and South Africa $5 billion.

“It is to be a mechanism that could react swiftly to capital outflow by offering swap operations ... in dollars,” Siluanov said.

If a need arises, China will be eligible to ask for half of its contribution, South Africa for double and the remaining countries the amount they put in.

“Some countries may put in less, but their needs are also greater, proportionally,” Siluanov said.

A BRICS member would be able to immediately get 30 percent of its eligible share and the remaining 70 percent only with a stabilization program from the IMF, Siluanov said.