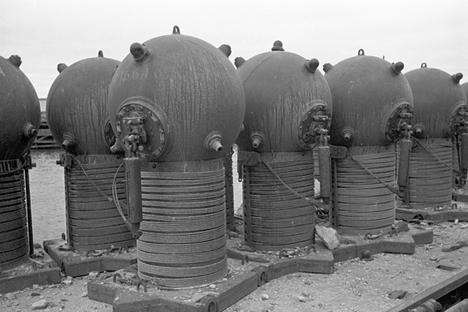 The Soviet naval arsenal included mines that were unparalleled anywhere else in the world. RIR takes a look at the most effective naval mines developed by the Soviet Union.

In the 20th century mines became an integral part of naval conflict, and the rapid development of various kinds of the deadly floating explosive device made them a key threat that commanders had to take into account when planning a marine operation.

Soviet devices played an integral role in disrupting enemy naval activity during World War II, and by the second half of the century, the USSR’s naval arsenal included mines that were unparalleled anywhere else in the world.

One of the most dangerous mines created in the USSR in the pre-war era is considered to be the M-26, which had a charge of 250 kilograms of TNT. This moored mine with a percussion mechanical fuse was developed in 1920.

The big advantage of the new design was the fact that the mine could be placed on the anchor horizontally, which made it easier to install. However, the short length of the mine-anchor cable (the cable for attaching a mine to the anchor and holding it at a certain distance from the water surface) limited the use of these weapons in the Black Sea and the Sea of ​​Japan.

The 1926 mine was the most widely used of all Soviet Navy mines during World War II. By the beginning of hostilities, the country had nearly 27,000 such devices.

The large moored KB electrochemical mine, which was used, among other things, as an anti-submarine weapon, was another breakthrough pre-war development. It was the first mine in the world to employ iron safety caps that automatically detached in the water. These served to protect the mine’s electrical elements (Hertz horns). It is important to note that the caps were fixed on the body using pins and steel lanyards with sugar safety devices. The pins were removed before installing the mine, and the lanyard was then removed at the fixed location as the sugar melted. The weapon was then ready for war.

In 1941, KB mines were equipped with submersion valves, which allowed the device to sink if it became detached from the anchor. This ensured the safety of the domestic ships that were in the immediate vicinity of the defensive barriers. It was the most effective contact surface-laid mine of its time.

In total, over 700,000 mines were used on sea routes during the war, destroying 20 percent of all the ships and vessels of the belligerents.

In the post-war years, domestic developers continued the fight for leadership. In 1957, they created the world's first self-propelled underwater missile – the KPM rocket-propelled rising mine, which served as the basis for the creation of a fundamentally new class of weapons: the RM-1, RM-2, and the PRM.

The developers used a passive-active sonar system as a separator in the KPM. This located and classified the target and gave the command to deploy the warhead and start the jet engine. The TNT weighed 300 pounds.

The device could be installed at a maximum depth of 100 meters; it could not be detected by acoustic mine-sweeping trawls. The device is deployed from surface ships - destroyers and cruisers.

The development of a new rocket-propelled mine that could be installed on both ships and airplanes began in 1957. This device brought about a true revolution; the construction of the KPM mine dramatically influenced the further development of domestic sea mines and the development of models for ballistic and cruise missiles with underwater launch and trajectory.

In the 1960s, radically new mine systems – mine-missiles and mine-torpedoes – were developed in the Soviet Union. After about ten years, the PMR-1 and PMR-2 anti-submarine mine-missiles, which had no foreign equivalents, were approved for use by the navy.

The PMT-1 anti-submarine mine-torpedo was another breakthrough. It had a two-channel system to detect and classify targets, was deployed in a horizontal position from the airtight container of the battle unit (an ASW electric torpedo), and was used at a depth of up to 600 meters.

The new mine-torpedo was adopted for use by the Soviet Navy in 1972. For the first time in domestic mine construction, the developers applied the principle of modular execution, using electrical wiring of nodes and device elements. This resolved the problem of protecting explosive circuits from high-frequency currents.

The advances made during the development and testing of the PMT-1 mine served as the starting point for the creation of new and more advanced mines. In 1981, developers finished working on the first domestic universal anti-submarine mine-torpedo. Russian naval experts claim that such mines were not available to the navies of leading nations at least until the mid-70s.

The bottom mine in the city of Khabarovsk (Russia's Far East). Source: Rossiyskaya Gazeta

The UDM-2 universal bottom mine, adopted into service in 1978, was designed to destroy ships and submarines of all classes. The versatility of this weapon was manifested in every aspect; it could be deployed from both ships and airplanes (military and passenger planes) and, in the latter case, even without a parachute system. If the mine fell in shallow water or land, it self-destructed. The charge of the UDM-2 was 1350 kg.