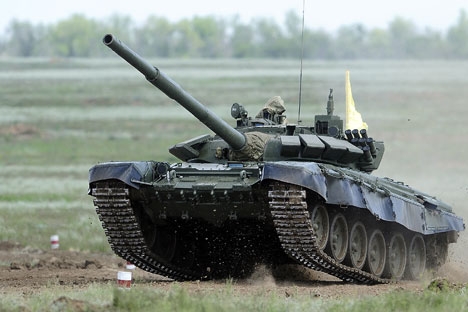 After World War II, most countries began to field new generations of anti-tank weapons that fired shaped-charge projectiles. Military designers had begun searching for ways to protect tanks. Since piling on ever thicker armor was no good option, a revolutionary solution was sought and found.

During the storming of Berlin in 1945, even untrained old men and teenagers of the German Volkssturm defense militia posed a serious threat to the advancing Soviet tanks, armed as they were with disposable Panzerfaust rockets.

These could knock out a tank with just one shot, which significantly slowed the Soviet advance in the final weeks of the war, especially in urban conditions.

Eye-witnesses said that when shaped-charge projectiles hit parts of tanks fitted with boxes of grenades and dynamite, they tended not to penetrate the vehicle. The reason was that the shell’s explosive force was vulnerable to a counter-explosion in the opposite direction.

In the 1950s the USSR began to develop the first systems of reactive tank armor. These took the form of block-like containers holding an explosive charge and metal plates that ejected towards the attacking round. Similar work was done in West Germany during the 1960s. In 1969, the Soviet Union developed the prototype of the Frame system, designed to protect the front of the tank’s turret.

But there were opponents to introducing such counter-measures. The Soviet Union tended to use tanks to transport infantry on the outside, making it foolhardy to fit them with explosive armor. This and other obstacles caused the installation of production samples of reactive armor to drag on for two decades.

The impetus for resuming development in the USSR was Israel’s successful use during the 1982 Lebanon War of Blazer reactive armor, which was developed in West Germany and was similar to the first Soviet system. Now, with this addition, even outdated tanks like the M48 and Centurion could withstand hits from portable antitank grenade launchers.

In the early 1980s the Soviet Union introduced Kontakt-1 reactive armor for the T-64, T-72 and T-80 tanks, which afforded comparable capabilities to the Israeli system. By 1986 a revolutionary second generation reactive armor system was adopted, providing not only good protection against existing shaped charges but also conventional armor-piercing shells.

During the conflict in Chechnya, where close-range anti-armor shots made Grozny’s narrow streets hell for Russian tank crews, vehicles fitted with reactive armor still proved to be hard nuts to crack.

“The new generation of T-72 and T-80 tanks showed significantly better survivability than tanks that fought in the Middle East in 1973,” says Bolnykh.

“One hit by a rocket-propelled grenade or anti-tank guided missile would not be enough to disable the tank. It usually took six to seven hits, and there is one recorded case of a tank surviving almost 20 rounds.”

Today, all modern tanks fielded by the leading world powers have basic reactive protection elements embedded in their armor. Russian T-90 tanks now incorporate the Relic system, which can withstand up to 90 percent of explosive projectiles and absorb over 50 percent of the energy from kinetic armor-piercing ammunition.

These units comprise rows of metal plates which are propelled back at an incoming round at a tangent, thereby destabilizing or destroying it. With a service life of around ten years, the blocks cannot be disabled with machine-guns and small-caliber cannons, are resistant to close explosions and overheating from the sun. Variants have also been also fitted on lighter BRT and BMP troop transporters.

Before long the reactive protection of armored vehicles will be controlled by onboard computers, further enhancing resistance to all kinds of modern antitank weapons.

But while this will ensure that tanks remain the backbone of ground forces on the battlefield for many years to come, developers of antitank launchers are not sitting idly by either. And so the age-old war of sword and shield continues in the 21st century.