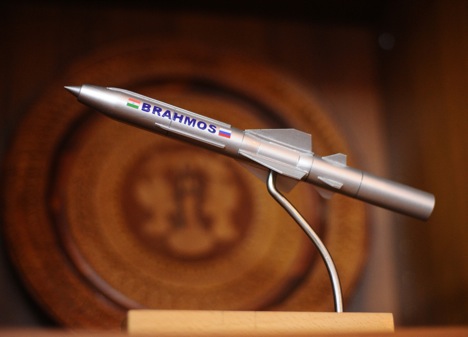 The development of the BrahMos program is currently progressing according to the approved plan. Source: AP

The entire range of BrahMos missiles will be on display at the exhibition that will be held near Moscow next month.

BrahMos Aerospace will install a display at the Oboronexpo 2014 weapons exhibition, Tass reported this week.  The entire BrahMos missile family, which can be launched from the air, land, sea surface, or underwater, will be showcased at the exhibition that will be held near the Russian capital on August 13-17.

The development of the BrahMos program is currently progressing according to the approved plan. A new 16-container vertical launching system (VLS) for the BrahMos surface-to-surface ultrasonic missile has been built. All Indian destroyers produced domestically will be equipped with it, BrahMos Aerospace’s senior-most Russian executive Alexander Maksichev told Tass.

“The new VLS has a modular construction and was developed entirely in India by BrahMos Aerospace specialists,” Maksichev said. “It is created on the basis of the scientific and technical groundwork generated during the creation of the 8-container VLS for the BrahMos missile that equips three Indian 11356 frigates,” he added.

According to Maksichev, the new VLS has a bow positioning and can be transformed into a launcher to the ammunition to the 32 BrahMos missiles for warships of larger displacement.

The Indian Navy launched a BrahMos missile for the first time from the main Kolkata-class destroyer (Project 15A) as part of test launchings held in June of this year.

At present, BrahMos Aerospace has equipped all three Indian Project 15A destroyers, the first of which is currently being tested and the other two of which are being completed, with bow 16-container VLSs for the BrahMos missile. Uran-E anti-ship missile complexes, which consist of 4 inclined container launchers, were installed on the ships of the prior Delhi-class destroyers (Project 15).

The new 16-container VLS will also be installed on four battleships of Project 15B of the third series. The contract for the building of this was signed in 2011 with a delivery date to the Indian Navy in 2018-2024.

A smaller version of the missile, the BrahMos-Mini, is being developed. It is being designed for deployment on fighter aircraft, and should be ready in the next 2-3 years. “The BrahMos-Mini missile’s first flight may happen in 2 to 3 years since in the BrahMos program we have made laid rather extensive technological groundwork, on the basis of which the new rocket with smaller dimensions will be created,” Maksichev said.

He added that the BrahMos-Mini missile can be created with not only an aviation variant “air-to-surface” for MiG-29 airplanes, but also a “surface-to-surface”  variant for ships as well as a “submarine-to-surface” for launch from submarines’ regular torpedo launchers. The main BrahMos in its variant of “ship-to-surface” can only be launched from a vertical launching system, provisions for which are made in the project of the new submarines for the 75I program. This might be offered to Russian developers in case of the announcement of an Indian tender for its development.

Work is continuing on the perfection of the software guidance system for BrahMos surface-to-surface missiles, the creation of an aviation variant of missiles for arming the Indian multi-purpose Su-30Mki fighter jets, and the further localization of mass production of the missile in enterprises belonging to the Indian defence equipment manufacturing industry.

Based on an article first published in Russian by I-Mash.ru.