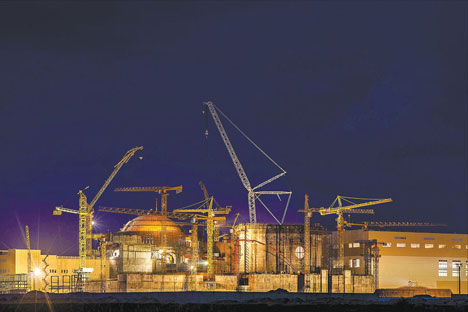 India is planning to build 19 nuclear power units with a combined capacity of 17,400 MW by 2017. Source: Press Photo

The nuclear scientists discussed strengthening existing co-operation as well as exploring the possibility of stronger ties between scientific research centres of India and JINR.

The Joint Institute for Nuclear Research (JINR) in Dubna (Moscow Region) hosted a scientific forum last month that brought together scientists from Russia and India, the Economic Times reported on its website. The forum aimed at strengthening existing co-operation as well as exploring the possibility of stronger ties between scientific research centres of India and JINR in the fields of fundamental theoretical and experimental physics, according to the paper.

JINR is an international research centre for nuclear sciences, with 5500 staff members, 1200 researchers including 1000 Ph.D's from eighteen member states that include Armenia and Belarus among other former Soviet republics. It has seven laboratories, each with its own specialisation: theoretical physics, high energy physics (particle physics), heavy ion physics, condensed matter physics, nuclear reactions, neutron physics, and information technology.

Indian and Russian officials told the Economic Times that JINR could serve as a “bridge” connecting Russian organizations with institutes and universities of India, facilitating mutually beneficial cooperation between scientists in both countries.

More than 60 leading researchers from JINR member states and 20 reputed experts from leading scientific research institutions of India, such as TIFR (Mumbai), IMSc (Chennai), IISc (Bangalore), IOP (Bhubaneswar) and BARC (Mumbai) took part in the conference, according to the report. There are presently two Indian scientists who are working at JINR as employees, the paper added.

The paper said an important part of the forum was a series of visits of the Indian scientists to the unique experimental facilities of JINR that included the Nuclotron-M in LHEP, accelerator complex in FLNR, IBR-2 reactor and spectrometer complex in FLNP.

India is planning to build 19 nuclear power units with a combined capacity of 17,400 MW by 2017. Eight of them will be built in cooperation with other countries.  In 2010, New Delhi and Moscow signed a roadmap for building up to 14-16 Russian-design power units in India.