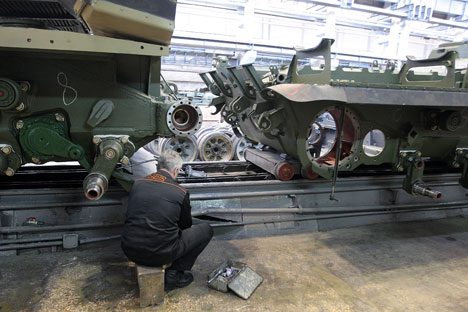 The real aim of sanctions against Russian weapons producers is to bolster America’s position in the lucrative arms market, argues Dmitry Litovkin.

On July 16 the United States imposed a third set of sanctions upon Russia to punish Moscow over the situation in eastern Ukraine. However, while previous measures were targeted principally at individuals, these sanctions took aim at companies. One of the firms included on the sanctions list was Russia's iconic military brand Kalashnikov.

In January 2014, long before the deterioration in Russian and American relations due to the Ukrainian crisis, the Russian company signed an exclusive contract for supplying firearms to the U.S. and Canada.

The company's exports to these countries are estimated between 80,000 and 200,000 pieces per year. In particular, the U.S. receives sportive rifles, hunting carbines and shotguns under the Izhmash label, as well as the Saiga rifle for police units.

Besides the U.S., Kalashnikov exports to 27 other countries, including the UK, Italy, Germany and Norway.

Vadim Kolyuzin, a professor at the Academy of Military Sciences, does not see realpolitik in the American sanctions. "Moscow is not involved in the events in Ukraine and in the Syrian situation it also limited itself to political measures," he says.

According to Kolyuzin, the U.S. Treasury's decision is based solely on economic reasons. Data collected by the Stockholm International Peace Research Institute (SIPRI) says that Russia is the world's second largest arms and military technology exporter.

Its total export sales in 2013 were $13.2 billion, and by the beginning of February 2014 export orders on Russian military production reached $40 billion. Russia is also conquering new markets, which in the past were completely dependent on the U.S., such as Latin America. In recent years Venezuela and Brazil's collaboration in the field of military technology has become just as important for Russia as that of China, India and Algeria.

According to Vadim Kolyuzin, the list of Russian companies that are targeted for sanctions by the U.S. Departments of State and Treasury remains consistent: the Kalashnikov Concern, the Uralvagonzavod Corporation, the state defense concern Almaz-Antey, NPO Bazalt, which is part of the Rostec Corporation, the Radioelectronic Technologies Concern, the Sozvezdie Concern, NPO Mashinostroyeniya and KBP Instrument Design Bureau.

In 2006, for example, the U.S. imposed sanctions on Rosoboronexport and Sukhoi for their collaboration with Iran and Venezuela. Back then, Moscow supplied Teheran with Tor anti-aircraft systems, while Sukhoi sold Caracas twenty-four SU-30MK2 destroyers.

Yet after six months the sanctions were cancelled. It had transpired that the American Boeing Company buys 40 percent of the titanium needed for the production of its new Boeing 787 airliner from the VSMPO-AVISMA Corporation, which is controlled by Rostec and Rosoboronexport. A solution was reached during a meeting between Boeing CEO James McNerney and Russian President Vladimir Putin in Moscow.

On the eve of the latest sanctions, during the Farnborough International Airshow 2014 outside London, Boeing's CEO rushed to anticipate the situation, announcing that Boeing is looking for a substitute for Russian titanium, but would not want to renounce it.

Due to the complications with Boeing, VSMPO-AVISMA has extended its collaboration with other partners, such as the European company Airbus, which also buys Russian titanium for its planes. According to the new contract, the Russian company will continue to be the supplier of sheet metal stamping and side panels for the new A320neo airliner engines.

The A320 (New Engine Option) is an enhanced version of the A320 airplane family with new engines. There are two types of engines: the European CFM International LEAP-X and the American Pratt & Whitney PW1100G. The PW1100G engine, however, is not only used for European long-distance airliners, but also for the Russian MS-21 airplane.

The Russian Irkut Corporation, which built the MS-21, not only builds the airliner, but also partially financed the creation of the PW1100G. According to Mikhail Pogosyan, president of the United Aircraft Corporation, which is Irkut's largest shareholder, there are already 180 pre-orders for this plane (the entire market consists of 1000 units). Deputy Minister of Industry and Trade Yury Slyusar has announced that in the case of a disruption in the engine's supplies, Russia will take legal action.