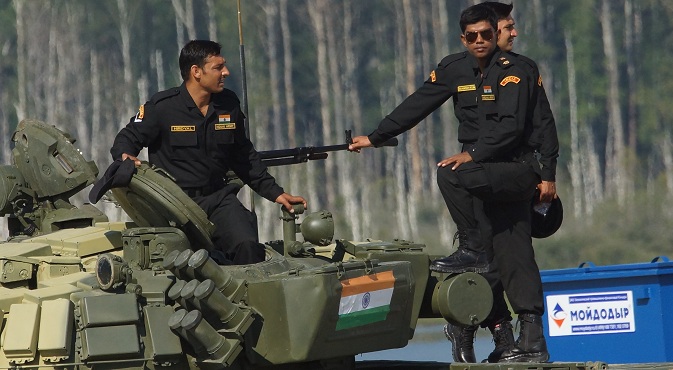 Russia’s Defence Ministry believes that the competition will help harness military cooperation with friendly countries such as India, China and Venezuela.

The First International Tank Biathlon kicked off on Monday, August 4, at the Alabino Firing Range in the Moscow region (53 km from the capital). Russia, India, China, Angola, Armenia, Belarus, Venezuela, Kazakhstan, Kyrgyzstan, Kuwait, Mongolia and Serbia are taking part in this unique event.

Russian Defence Minister Sergey Shoygu spoke at the opening ceremony of the championship, where he said the Tank Biathlon was of great importance for the defence industry.  “The constructed course will not only determine how prepared servicemen are, but also test the strength of the armoured vehicles,” he was quoted by Interfax as saying.

He also added some political statements. “Faced with the complicated international situation, the upcoming competitions are designed to promote trust and understanding between the armed forces of different countries,” Shoygu added. “This championship is a testament to the desire and willingness of Russia to work on the development of international partnerships in the military sector.”

There are 4 phases to the current Tank Biathlon competition: individual races, 3-kilometre sprints, pursuit and relay races. Each member state is represented by four tank crews – three primary ones and a backup team.

The length of the course is 7.1 km. The track includes a high-speed section, firing ranges, obstacles, such as passage through minefields, two uphill slopes, fiery band, anti-tank ditch, obstacle belt and manoeuvring, mounds, two escarpments, fords, and a model of a track bridge.

Despite the upbeat statements by the crews of the various countries about their readiness to win the prizes, the first day of the competition has shown that leadership still belongs to Russian tank crews. It seems that a few weeks of hard training of foreign crews directly in Russia and on Russian machines was not enough to bring their skills to the level of the home team. From the stands, it was clearly seen that the Russian crews were performing exercises more precisely, quickly and confidently, as compared with the visiting teams.

Perhaps in the course of the championship, this situation will change somewhat, although breaking the trend set on the first day is quite unlikely. After the first day of the competition, the results of the individual racing determined four leaders: Russia, Armenia, China, and Kuwait.

The first international tank biathlon, with the active support of the Russian Ministry of Defence was held a year ago. This event was a resounding success, and from it came the idea to create a full-fledged international tank biathlon as a form of actual military sports competition. The desire to participate in the international championship was expressed by a large number of countries, including NATO countries. It was assumed that the teams would be able to compete using their own combat vehicles, which would further increase interest in this discipline.

Due to the aggravated geopolitical situation and the refusal of the North Atlantic Bloc to participate, the championship participants competed on Russian T-72 tanks.

The rules of the tank biathlon do not prohibit tank crews from using machines of other brands. The Chinese team arrived in Alabino with their Type 96A tanks.

Put into service in 1997, the Type 96A forms the foundation of the PLA armoured units. This machine is markedly different from the T-72. It is 5.5 tonnes heavier than the Russian tank. However, its maximum speed (65 km/h) exceeds the rate of the Russian machine by 5 km/h. The Chinese high-speed tank sports a boosted 1,000-hp diesel engine. This engine is a further improvement of China’s diesel tank 12150L7-BW, and thus continues the line of the Soviet V-54 engine.

Type 96A gun – is an exact replica of the Russian 2A46M gun. Ammunition – 42 shells, 22 of which are located in the autoloader. Like in the Russian tank, the Chinese firing rate of the gun is eight rounds per minute. The main differences between the Type 96A and Russian machines lie in their appearances. The Type 96A has a characteristic angular shape, thus slightly reminiscent of the German Leopard 1.

During the competition, the Type 96A showed good fighting and technical capacity, at the level of most of the other machines involved in the championship. An unfortunate loss of a caterpillar track, kept the Chinese from overtaking the Russians.

Like last year, each member of the winning crew in the finals will receive as a prize – a new car from the Uralvagonzavod (UVZ) Corporation. This time the prize vehicle will be the Russian SUV – UAZ Patriot, fully loaded. The keys will be handed out to the winners on the last day of the competition, August 16, after the results of the championship are tallied.

In Conversation: Major Puneet Sushil of the Indian Army

How long have you been using the T-72, and do you like this machine?

We have been working with this type of tank since 1979. This is a very good tank.

What are its main advantages in your opinion?

First of all, it's the tank’s good armour protection, as well as its high power output.

How many days have you had in order to prepare for the competition in Russia?

In Russia I had about three weeks. We also had a lot of preparations at home.

There are no particular differences. The communication systems are slightly different.

Were the Tank biathlon participants in India recruited from ordinary soldiers, or do you have some special subdivisions for such purposes?

A selection was made from several regiments, the best of them were selected, from whom the crews were formed.